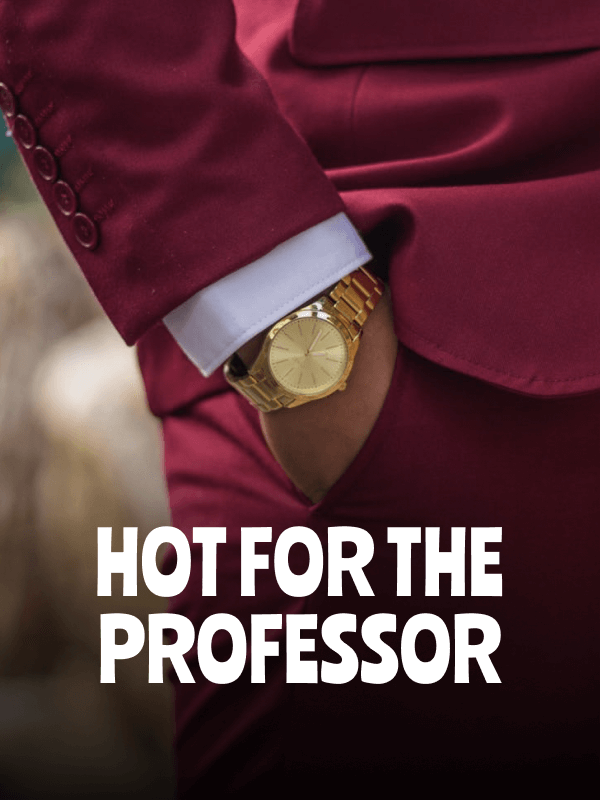 Hot for the Professor

When Avery’s down and out, her embarrassing past with Logan forces her into an educational—and very sexy—future. Years ago, Avery’s neighbor Logan proposed to her on his eighteenth birthday. She’d always known the genius next door was different. After all, he’d become a professor in his teens. But that day, for the first time, she’d actually seen him as a man and it had disturbed her, so much so that she’d avoided Logan for years afterward. Now Avery’s broken up with her employer and live-in boyfriend and she’s out of a job and out on the street. As a last resort, she reaches out to Logan’s mother. Big mistake. Logan gets involved and suddenly Avery is facing all the accumulated history between them. Logan is trying to help her get back on her feet, but Avery suspects he has an ulterior motive. When it comes out that he’s still suffering from that old teenage obsession with her, she severs the relationship, no matter how much it hurts in the process. After all, the two of them couldn’t possibly work out, could they?

How did this happen?

That morning Avery’d had a job, a savings account and a live-in boyfriend. Now, at the end of the work day, she had none of those.

Standing on the sidewalk outside her office—her former office—she struggled to fight back angry tears. She had nowhere to go, not even for the night. Her purse contained forty dollars, all that remained from the ATM withdrawal she’d made on Monday. Today was Friday. Where had the rest of the money gone?

Actually, she knew where—on lunches and lattes and all the little treats people with decent jobs indulge in without thinking. She’d had a decent job on Monday and Tuesday and the rest of it, up until today. Up until a half hour ago, when her boyfriend and boss had called her into his office and told her they were done, both personally and professionally—just like that.

Drew, her boyfriend—ex-boyfriend now—had promised her a severance check in lieu of the notice he should have given her. He should know. He was a lawyer. Presumably kicking her out of his life was all fine and good as long as he paid her for her trouble—except the check in her hand was worth nothing right now.

Oh, and he’d also frozen her bank accounts and credit cards. They were all joint with him and he couldn’t expose himself to that kind of liability now that they were no longer together, could he? Avery suspected that his action might have been slightly less than legal, but what did she know? She’d only worked at his law office. She didn’t actually know much about the law.

“Do you need any money?” he’d asked, oh so politely, before he’d opened the door to his office and bid her to get the hell out—though, again, more politely—“For a hotel room or cab fare to a friend’s?”

She’d refused. Asked like that, in those circumstances, she believed any woman would have done the same. He might have frozen her accounts—only temporarily, he assured her—but he hadn’t deactivated her pride. It was all that was holding her upright at the moment.

Pride aside, it was practicality that kept her from barging back into Drew’s office and demanding cash instead of a check. In reality, she’d set up her life in the worst way possible—working for her boyfriend, living in an apartment he rented, sitting on his couch, sleeping in his bed.

She had nothing to her name.

Sure, she’d always told herself that when her artwork started to sell, she would be better off. Living with Drew and counting on the handout that was her salary at his firm, she’d been able to fool herself into believing that it was only a matter of time. She would hit it big one day—not could or might.

Now, for the first time, she seriously doubted it would all work out.

She was thirty-seven years old and had never had a job paying more than minimum wage, except for the one her boyfriend had given her. As Drew had repeatedly complained, she’d spent most of her days paint-splattered, with her hair bundled up under a handkerchief to keep the dust out of it. She was a little vain about her long, glossy black hair, but most of the time she couldn’t even be bothered to get it cut or styled properly. Drew had wanted to show her off at parties, but she dressed and acted so differently from his friends’ wives and girlfriends that they’d usually ended up in an argument on the way home.

He was right. She was a mess—a hopeless one.

Sniffing forcefully, Avery stepped away from the side of the building she’d come out of and into the stream of afternoon commuters. They had little patience for the idle and jostled her while she made her way to the edge of the curb.

Taxis passed, their roof lights extinguished. Of course, they were all full at this time of day.

What is the point of hailing a cab, anyway? She didn’t know where she was going.

Her only remaining family member, her grandmother, was in a nursing home. The elderly woman rarely recognized Avery when she visited. The only smart financial move Avery had ever made was putting the money she’d gotten from the sale of her father’s house into a trust that paid for her grandmother’s living expenses at the home. The last thing she needed was to be worried about both her and her grandmother being homeless.

That left Marian, the woman next door, who’d always been something of a surrogate mother to Avery.

Marian would take her in. She was too sweet and kindly not to.

Making up her mind, Avery started walking to the nearest bus stop. It felt like a very long walk.

“Andrew threw you out?” Marian asked for what felt like the hundredth time.

“Not threw me out,” Avery said, “fired me and evicted me. He was perfectly within his rights.”

At least, she’d thought so when he’d explained it. Now, she wasn’t so sure.

“You should talk to a lawyer,” said Walt, Marian’s husband.

“Drew is a lawyer,” Avery reminded him.

“Well, you can’t just take his word for it,” Walt told her. “This can’t be right, leaving you jobless and homeless like this.”

They were all seated on Marian’s flowery living room set, the older couple appropriately on the loveseat and Avery lost in the depths of the sofa. Tea and cookies sat on the low table between them and, although she was hungry, Avery couldn’t take a sip or eat a bite.

“Lawyers cost money,” she said, remembering the totals on some of the bills she’d posted. “And it’s his apartment and his firm. He can do what he wants. He gave me a check in lieu of notice. If I take it to the bank, I’d have to wait a few days for it to clear, or I guess I could go to one of those check cashing places that keeps a cut off the top.”

This was what it had come to—emergency check cashing and mooching off her relatives—if she could even consider Marian a relative. Legally and technically, Marian was no relation to her. Thankfully, that wasn’t how Marian saw it—or how Avery herself saw it, either.

Marian had been a loving, if overwhelmed, surrogate mother to her for many years. Overwhelmed, no doubt, because she hadn’t known what to do with the moody, creative teenaged girl who had slouched over to her home every day when she had been busy single-parenting her own child, Logan, a quiet, studious little boy. Fortunately, Marian had done the right things—asked few questions and showered Avery with attention, exactly what her soul had needed after her own mother had passed away so young.

“You can’t go to one of those places,” Marian said, aghast. “They practically bankrupted Sally’s granddaughter.”

The building they lived in now was filled with people in their seventies and eighties who had nothing to do but share horror stories about their lives all day long. Marian, only in her fifties, was the youngest in the group, but her second husband, Walter, was pushing seventy.

“You can stay here,” Walt said, “while you get back on your feet.”

Avery looked surreptitiously around the small apartment, crowded with heavy old-fashioned furniture. It was a one-bedroom, barely enough for the two of them.

Maybe she could sleep on the couch, although it was lumpy enough for just sitting. There was always the floor—

Marian was pinching Walt on the thigh. She drew her hand back as Avery glanced their way, otherwise she wouldn’t have known why Walt was yelling.

“Sorry, dear,” Marian said, blinking at her husband. “I was trying to remind you about our trip.”