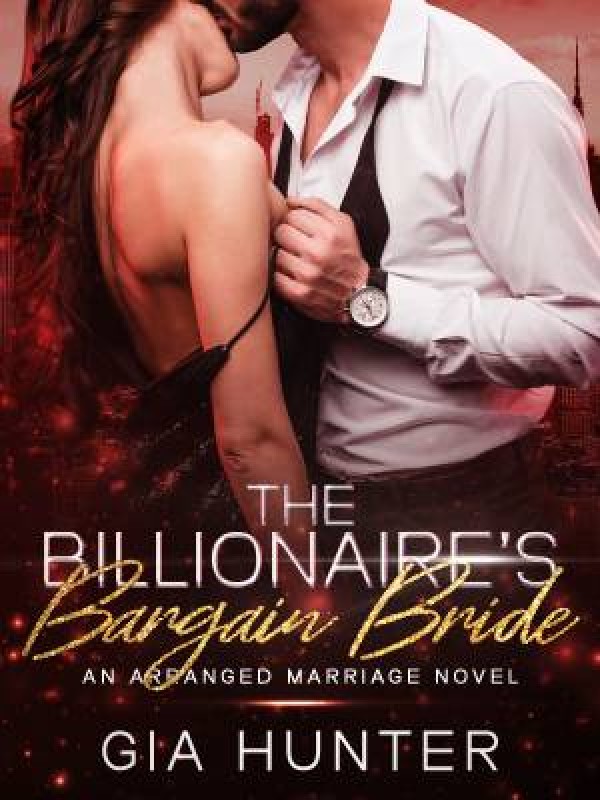 Sadie Greer just turned nineteen when her father arranged her marriage to a Crypto developer Cenric Wollf over a business deal. As soon as she finished college, she finally met him, marrying the evil wrapped in a pretty thousand-dollar suit the same day. Unknown to Sadie, her husband has his own motives. Cenric Wollf has been sleeping with his enemy for years just to help take down the man behind his brother's death, even if it means sacrificing his own freedom. He married the daughter of his enemy. Sadie is only a part of his plan, his subject, the weak link. He's supposed to charm her, seduce her in his bed, and use her as his pawn. When he gets to know her, she's nothing like her father. Cenric starts to feel something afraid he's losing control over. He falls deeper. Contrary to what Sadie's brother has fed her over the years, she doesn't sense danger in the air. Cenric likes to take control to keep her safe, but nothing dark and deadly, just thrills and crazy chemistry. When she starts to get to know him, something else resurfaces. They both fall into their own trap. Cenric's true intentions and her family secrets prevail. But nothing Cenric wouldn't do to prove that there's more to it than their arranged marriage, even if it means befriending the man who hurts his wife.

I hate promises.?I always would.?

When I made a promise to protect someone, I failed her. That changed my perspective—maybe it meant to be broken. Right now, it contradicted everything that I believed. I had to fulfill that promise. Even for someone like me, I couldn’t escape from it.

It happened even before I became who I was, and I should have forgotten about it, but looking back at the dying woman in my arms I failed to protect, I just couldn’t let it go. I had to make it possible, even if it meant signing off my life away from freedom.

I rifled through the folder on my desk. I wanted to get my mind off the wedding—my wedding in two days. And here I was, working my ass off even if I should be relaxing before the fucking end of my bachelor life.

But there was something about her that I couldn’t shake off.?

I had not met her. I had decided not to. The marriage was a fucking business deal, and her family was even enthusiastic about that—the fact that I literally bought her, and she knew that—it sickened me.?

My brother, Cas, met her on my behalf. I always found excuses every time there were gatherings, even our engagement. I wouldn’t call it a party because we were not in love.?

It was a business deal— mutual understanding between her father and me.

The blue folder caught my eye again, even if I tried to ignore it for the whole month.?

I grabbed and flipped it open. I squeezed my eyes shut before I stared at the first page. Her picture caught me off guard. She looked young in this photograph, but I knew she was already twenty-one. In fact, she finished college this year.

“Like her already?” I almost fell off my chair. My cheeks burned as if someone had just caught my hand in a cookie jar.

I closed the folder and turned to face my brother. “What are you doing here? Aren’t you supposed to fit your stupid tux or something?”

He walked in towards my desk and grabbed the folder of the background check report I asked for from my PI. I was curious about my future wife, and at the same, I wanted to know a bit about her life. To be honest, I wanted to know her past relationships before our wedding.

Her family, on the other hand, I hated her father, and so as her brother. Who was sane father did that to his own blood??

Hanslo was a son of bitch who chose to save his business over his daughter.

Her brother, Jasper, was another fucking son of the bitch. I hated him even more—he had my future wife on his leash. It had to end, or I would finish it myself.?

“Cenric?” He snapped his fingers on my face. “Your teeth would crack if you wouldn’t calm down. And you’re about to create holes into that wall.”?

“Sorry. Why are you here again?” I straightened up on my chair.

“I haven’t told you, but I came here to check up on you and make sure you’re not getting cold feet and planning to be a runaway groom.”

I rolled my eyes. I looked down at the stacks of folders, and I wanted to throw them in the trash. I tried to focus on some things, particularly not reading the file of my bride. Shit. It sounded awful.

I saw her once, but that was years ago. I still wanted her to be ugly, fat, with braces and pimples, but if the picture in that folder is up to date, then she was undeniably gorgeous.?

She had a small round face. Her big crystal blue eyes staring back at me held a multitude of secrets. Her nose was straight and perfect. Those lips should be a sin. Her dark blonde hair just made her more beautiful.?

She was my downfall. I could feel it.

“I know everyone is gonna be nervous when getting married. It’s normal. You wouldn’t be human if you wouldn’t feel like there’s a knot in your stomach.”

He was right, I had never been this nervous in forever, but knowing that my life would change drastically in a matter of two days, I couldn’t shake this feeling off, so strange I wanted to throw up.

“Spare the advice, bro. You’re not the one whose life is gonna be tied to a woman you don’t know.”?

“She’s gonna be a good wife. Trust me. If you just took my advice to meet and know her, you wouldn’t feel this way.”

I glared at him. “I want to take care of her, not fall in love.”

“So you admit that she’s attractive?”

“Fuck you. I can’t go through do that. Knowing her father and Jasper are power-hungry, I feel like I’m gonna fail her again. I won’t let it happen.”

“Then you made the right decision.”

“Can’t be just you, brother. It should be one way or another.”

“Fuck you. Get out before I run away and never show up on my wedding fucking day.”

“It’s fine by me. I will be marrying your fiancee.”?

An utmost overpowering outrage gripped me. The words marrying and fiancee in one sentence made me see red. An unfamiliar possessiveness shocked me that even my own brother I wanted to wring his neck.?

He shook his head before his lips spread into a wide grin. His eyes glimmered with laughter. His lips twitched in amusement before he lifted his hands in a surrendering gesture.

“Get the fuck out. I have a lot of things I need to settle before I go on my merry wedding way.”

“See you, brother.” He saluted before he burst out of my office door.

Once Cas was gone, I shifted in my seat uncomfortably. I started to realize that there was no going back. Everything was set and ready for the big day, only me that I couldn’t think of even getting a girlfriend, let alone getting married to the woman I knew nothing about aside from her being Greer.

I stared at her picture again, hoping it would magically turn her into an ugly duckling. But the more I stared at it, the more she turned into a fucking swan.?This is not happening.?Something about her that made me want to own her, mark her, take her right here, right now.?Jesus.

I was accustomed to letting my lust lead me when it came to sex. I got what I wanted, and I gave what I could. But by just looking at her image, I wished I was wrong. These unfamiliar feelings of raw lust, rage, and possessiveness started to be out of my control. And the worse part was, I had not even met her yet.

I almost jumped in my seat when my phone vibrated on my desk. An unknown number blinked on the screen.

“Help me!” It was a voice of a terrified woman. My heart stopped dead in my chest.?

I froze for a moment.?Why do I feel like I know her?

I stared at the screen in shock. “What the fuck?” She knew me and called my name, yet her voice was unfamiliar.

I dialed the number. I was the kind of man who never answered or called back, but I got the feeling it sounded like her life was hanging in the balance, and my instinct told me to protect her. Whoever she was.

Then it answered quickly from the other line.

I shot him a bloody murderous glare even if he was not in front of me. “Where is she?”

“Then why did she call? She sounded terrified, and the line went off after.”

The other line went silent for a few seconds as if he was trading his words carefully. “She tried to escape.”

“Is she held against her will?”

“She wants to run away. You know that she didn’t want to get married from the start of the arrangement.” Of course, who would willingly want to marry someone like me? I may be filthy rich, but not all women could be bought by fucking shiny and glittery diamonds.?

“Don’t ever hurt her or lay a hand on her. If I ever see a small cut or bruise on her skin on my wedding day, call everything quits, even our fucking contract. Do you understand me?”

“And make sure in two days, I have a bride to marry, unscathed.”