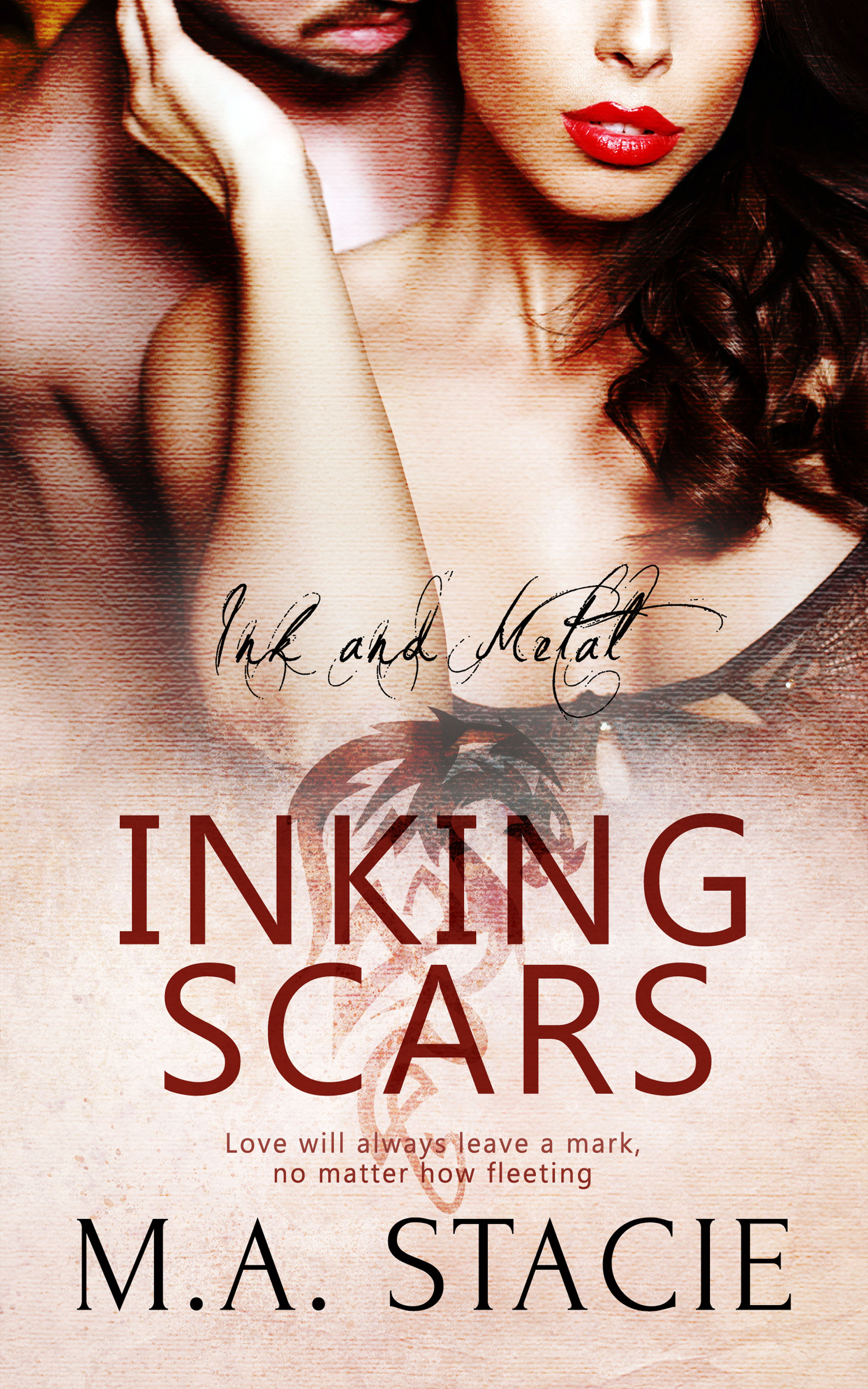 Love will always leave a mark, no matter how fleeting. Tattoo artist Seth Baxter has had enough loss to last him a lifetime. Focused and driven, he channels his energy into making his store the best in the business. The one thing he can certainly do without is the return of his ex-girlfriend. Bexley Way is lost. She runs back to the only person who can help her. She’s willing to take Seth’s hurt as long as he’ll offer her the solace she craves. He needs her help in the store and she’s desperate for his forgiveness, as well as his personal brand of security. Secrets are kept by both of them, even when their old, unresolved feelings resurface. Each day spent in her presence is a step forward for Seth. Their relationship was never truly over to him. Yet Bexley keeps so much to herself. Protecting her heart. Protecting Seth. But when Bexley is faced with the true horror of her situation, she has no choice but to reveal it all to Seth. However, the words barely leave her lips before it all takes a deadly turn, leaving behind more anguish than ever before. Are Seth and Bexley strong enough to right a past wrong and give themselves a permanent future?

If Seth Baxter had to tattoo another butterfly he’d scream. Either that or give the damn thing a rockin’ skull design. He needed something to break the monotony, and no matter how much he told himself that inking them was easy money, it was still a fucking butterfly.

“Dude, would you stop sighing? You’re clogging up the store with chick vibes.”

Seth glared over at his partner in crime, flipping him the bird at the same time. It was childish, but it was all he had at the moment. “The next butterfly is yours then, Skirt. All yours, along with the Hello Kitties and random cartoon teddy bears.”

Skirt chuckled, running his heavily tattooed hand along his Mohawk. Winking at Seth, he said, “If you got your finger out of your ass and hired another artist you wouldn’t need to bitch. You could also send the shit stuff their way.”

“I don’t have time to interview anyone, dumbass. I can’t be in two places at once.”

Seth began cleaning down his station after his last client, spraying the bench with antiseptic and wiping along the seat. He tried to ignore the laughter coming from his friend’s direction.

Skirt snorted as he checked himself out in the mirror. Every inch of the man’s arms, shoulders, chest and neck were tattooed. Intricate swirls, patterns and images climbed up his arms and converged at his throat. His earlobes were stretched, white disks filling the voids, and the piercings didn’t stop at his ears. His lip, eyebrows, nipples and much lower down all held steel jewelry.

Seth, on the other hand, was somewhat more sedate. His ears, though still stretched, were smaller, with an industrial bar pierced through his right one. They were the piercings people could see, anyway. Both of his arms were sleeved with ink. His right one held a large red dragon that wrapped his bicep and forearm. His left was adorned with a Japanese koi fish design.

In the last year, he’d added to his art once. Script on his neck. A reminder. Seth intended to have more, but since the opening of Inked Heart three years ago he hadn’t had time, and the one person he trusted to ink him was as busy as he was.

Hence the need for another artist.

“Maybe you should take an apprentice on?” Seth tried, knowing it was futile. “It’s time you did.”

“No way, no how. I keep my magic to myself. I won’t be sharing the skills, man.”

“You’re such an asshole.”

Skirt winked again, pointing over to the door as a couple of blonde-haired girls walked in. Seth groaned. Cheerleaders. They had to be. They oozed high-school drama with a dash of bitchy perfection. Thinking about it brought him out in hives.

“Ladies,” Seth greeted, eliciting a giggle from them as he walked closer. “What can I do for you?”

“We want tattoos,” they said in unison.

He blinked, their high-pitched squeaks almost making his eyes water. High-school girls annoyed the shit out of him. “Well you’re in the right place for one,” he replied. “But I’ll be needing some ID before that can happen.”

The shorter of the two toed the floor. The other twirled her hair while popping her gum. “Darcy said you’d hook us up. She had hers done here last week.”

Seth turned to Skirt, raising an eyebrow. Skirt shrugged, giving his head a quick shake before leaving through the door at the back of the store.

“Don’t know a Darcy. What did she get done?”

They mumbled to each other, their complexions growing flushed with embarrassment.

The other one chimed in. “It was a girl.”

“Kit!” Seth bellowed, never breaking eye contact from the teenagers. They squirmed under his scrutiny, though stuck to their story.

A purple-streaked brunette raced into the room, steel clamp in her gloved hands. Her heavily lined eyes were wide in surprise. “Where’s the fire?”

“You tattoo anyone named Darcy?”

“Not inked anyone in about a month—I’m all about the piercing and you know it. Before that? Got no idea. Why?”

Seth glared at the girls, who were now not so sure of themselves. “So, that brings me back to my initial statement—I. Need. ID.” His tone was cold. It pissed him off that kids like this spread rumors about his store. His business was not a joke, nor was his reputation something to fuck with.

The girls shrank back, the taller one stuttering that they’d go home and return with it.

“You do that, then I’d be happy to mark you myself.”

They scuttled out of the store before he’d even finished the sentence. They wouldn’t be back.

“What the hell was that all about?” Kit asked.

Shaking his head in exasperation, he said, “Kids and their stupid-ass ideas. Are you piercing?”

“Yup, but I’ll need to change my gloves now.” She was trying to complain, but Kit came across as cute no matter what she said. The bull ring through her nose definitely gave her a harsh edge. However, five minutes in her company revealed the contradiction to anyone.

“Sorry,” he said, sitting back behind his desk and picking up a pencil. “I wanted them quaking in their shoes so much that they won’t come back here. Or fuck with my name.”

Kit spun, her high-tops squeaking on the floor as she returned to her client through the door marked ‘The Holey Order’. It left Seth alone in the store. He tried to focus on the sleeve design in front of him, however, his mind kept wandering. He’d been a moody bastard lately, so much so that it wouldn’t surprise him if he got his period. There was something messing with his control.

It could be the stress, but then that would bring him back to the topic of another artist and he wasn’t ready to admit why he was so reluctant to take one on. Having another artist in the store hadn’t gone so well before. Maybe what he needed was a hot tumble between the sheets to sort his head out. Fucking himself into oblivion had to help, right?

Laughter from the back room broke his musings. Kit escorted her client out of the store, both amused by Skirt. Nothing new with that scenario, he supposed. However, when Skirt stalked over to the window carrying a piece of paper, Seth began to feel nervous.

“Problem solved,” Skirt said, sticking the paper to the window.

Shrugging, Kit lifted her denim jacket from a peg on the wall. “I’m out. I’ll be back in an hour to give someone a hole in their nipple. Want me to get your fix, Boss?”

Seth chuckled. His fix was coffee. Damn, he didn’t know how he’d get through a day without a decent dose of the black tar. There had been a time, a couple of years ago, when he’d tried to quit. He wasn’t being dramatic when he said it was the worst two weeks of his life.