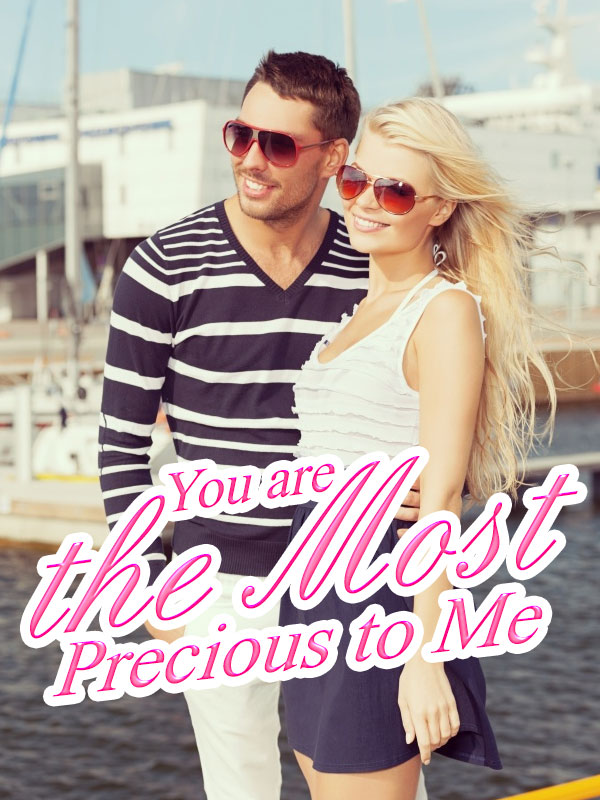 You are the Most Precious to Me

Since five years ago, Melissa had been suffering from a painful incident due to which all her emotions, and feelings were also lost with that incident. She only had a great attachment towards her book which was very precious more than her life, which holds a very precious memory of her life. But One day, a guy in a black suit let her precious book fall to the ground and mistakenly stepped on the book. She was really mad and directly slapped his face twice. What happened if she discovered her new boss was the guy whom she slapped?

Feeling intense pain over her head, she woke up from bed. She looked at the time on her cell phone and it was almost seven o'clock in the morning.

She put her cell phone back on the table and went straight to the bathroom. She stared at the mirror at her reflected self, there was a dark circle over her both eyes due not getting proper sleep cause of her over time work. Her messy hair, dress, in fact, her entire appearance was messy honestly.

She took a warm bath relaxing her slender body. After taking a warm bath, she then gazed at the mirror at her reflected self. Water droplets dripping from her wet hair to her chest, she looked completely different.

Her slim white like a milk body bringing out her whole appearance like a model who just came out of front magazine, her smooth and soft white skin like of a little kid, long and lovely eyelashes with steep eyebrows, long black straight hair, sexy thin pink lips, making out her whole appearance unbelievablly graceful, glorious and elegant like a noble.

But— Her lifeless eyes were clearly stating that, she doesn't care about her appearance, whether it's glamorous or what's so ever.

Belief, enthusiasm, passion or feelings, those kind of emotions no longer existed in her lifeless eyes.

Honestly, she even herself can't identify it out, what kind of emotion now existed in her eyes or its just deserted with nonentity around where it is surrounded by a strong barrier.

After taking a warm bath, she directly went to her kitchen, she boiled two eggs, filled one glass of orange juice and started to have her it and after having it, she reached to her room to change into her company uniform from bathrobe.

The company uniform which she had worn made the uniform looked more outstanding. She was more like a model which brings any dress to life.

She wore light makeup on her face, especially around her dark circle, even with just a light makeup, she transmitted entirely into different version of herself. She looked flawless, remarkably stunning and gorgeous.

It was almost 8:15 A.M. She put her cell phone into her bag, took out her precious book on her arm carefully and locked the door of her apartment.

She went straight to the bus stop waiting for a bus. After it arrived, she went inside quietly. Everyone on the bus ware staring at her, even some people mistook her for a celebrity.

She was already used to such reactions, and of course, She didn't cared about it, not even a bit.

Before nine o'clock, she reached her office just right at the time.

"Good morning, Melissa." Everyone greeted her with a smile.

She greeted them back without any emotion on her face, nor with a smile, nor with a cold face. Everyone in her company were used to her emotionless complexion.

At first, when she joined this company, employee's of this company used to assume as a weird person and of course, they still do. Well, after some time, they all got used to her emotionless expression.

"Hey! Listen, Listen." Sizu came rushing to the office as everyone's gaze falls at her.

"Our new boss is going to come within this week." Sizu announced excitedly "Guess, who is it?"

"New boss?" One of the employees inquired in surprise "Don't know, Who is it?"

"Second Son?" One of the employee female stood up from her chair "Really? I heard that he is extremely handsome. He was used to do model for news article when he was a kid but then, he leaved for foreign country to study. After that, no body has heard about it."

"Yeah! Yeah!" One by one started to converse about the new boss in the office.

Sizu clap her hand, drawing everyone's attention towards her "Aa-hmm! Well... so everyone why don't we prepare welcome party for our new boss?"

One of the female employees came forward "No we can't. It's in our company rule, if we broke the rule then, we have to bear a big consequence."

Another female employee voice came from backwards agreeing with her "Yeah! It's true but at least we can welcome him by giving him a beautiful flower."

Everyone agreed with her opinion and so did Sizu.

"Well... that's it then. Let's welcome him with a beautiful flower." After saying that Sizu strolled straight to Melissa "Aren't you excited for this?"

"For what?" Melissa asked working on her file without peeking a glance at Sizu.

Sizu gave a heavy sigh "I had already expected this from you so don't worry, I'm not surprised. I'll tell you. Our new boss is going to attain within this week."

"So...?" melissa responded without any excitement or emotion.

"So?" Sizu grabbed melissa face and turn towards her, fixing each others gaze "So... our new boss is our retired boss second son. I heard, he is truly handsome and he is young but I don't know whether he is still married or not?"

"Does have anything to do with me?" Melissa asked gazing at her.

"Well... not really... but yeah... I mean if we got chance to hook up with our boss then..." Sizu launched to possess a daydream with a drool.

"Would you leave my face now? I have tons of works to do." Melissa wasn't interested at all.

Sizu felt so boring now, her all excitement was vanishing because of Melissa's reaction "I knew you would response something like this way, but even so, I wanted to share my happiness with you."

Melissa didn't mumbled anything as she continue to do her work.

"It's the same as always. Why are you even bothering to tell her?" The soft voice came from behind.

Sizu immediately turns her head to the voice "Oh! Jenny, I know." She let out a helpless sigh.

Jenny chuckled lightly and strode towards Sizu and Melissa "So, you're still working, huh!"

Jenny and Sizu has always admire Melissa. She had just joined this company three months ago and her working ability is so perfect that she could pass Jenny and Sizu at any time who has been working there for more than a year.

Maybe, she could get a promotion at any time too. She was just too hard working employee towards her work. Even the retired boss was really satisfied and pleased with her excellent performance.

Jenny extended her hand towards where Melissa had put her precious book beside the computer.

Melissa instantly grab her hand and glared at her with a cold, lifeless face.

Jenny shortly withdraw her hand from Melissa and raised her hand upward as if she was surrounding to her "Don't worry! Don't worry! I don't want to die so soon at this young age. I was just going to take that file, not your precious book."

Melissa cold face gradually disappear and return back to normal "Ask me first, I'll give you by myself."

Sizu cackled and patted jenny shoulder heavily "I honestly believed that you were going to die."

"Stop it. That's not funny." Jenny took a file from Melissa. "I'll return this back you tomorrow." After saying that, jenny went towards her way.

"No!" Melissa instantly rejected her. Sizu knew that she would reject her but she wasn't ready to give up yet. She requested her many time, finally, Melissa agreed to go with her.

Even though Melissa didn't wanted to go, she had no choice but agree with her. Otherwise, Sizu wouldn't have left her alone until she won't accept her request.

After the work was completed, Melissa and Sizu went to the shopping mall.

Melissa was holding her precious book on her chest carefully. After buying some cloth, they went to the famous park near the shopping mall for some rest.

"Do you want some cold juice? I'll bring it... you wait here okay?" Sizu went to buy juice near the park shop.

On such luxurious restaurant, near a famous park, mainly businessman came here to have a business meeting cause the view in the park and everything else was perfect to have a nice meeting.

Melissa saw a garden with varieties of beautiful flowers in front of her which made her remind of her precious memory. She walked towards the garden recalling those precious memories.

The more she was losing herself in those beautiful memory, the more she started to feel an intense real pain over her head as the a huge stone was hitting right back to her head. She started to feel so weakness over her all body as if it was giving up on her. She couldn't even stand straight properly.

She searched for her medicine in her bag just to found out that she had forgotten her medicine on her office desk.

She wanted to take that medicine so badly, to reduce her crazy unbearable pain. Fortunately, Sizu came at the right time.

Sizu knew very well about Melissa sickness and about her medicine. Fortunately, the medicine shop was really near to the park.

Melissa was suffering too much pain cause of not getting that medicine which helps her to calm down. She was still holding her book in her arm and due to the pain in her whole body, head, she couldn't move and can only wait for Sizu at that same spot to get the medicine.

While she was waiting panting heavily, someone was rushing to the exit of the park. When that person was rushing, he dump on Melissa unknowingly.

Melissa glared at the person, He was wearing a black suit with white plane shirt and dark blue tie making him outstandingly handsome and perfect to be real. His face was really smooth, his wavy hair covering his forehead, sexy lips, phoenix eye, which can make anyone fall in love at first sight unable to resist... he was just like a prince of every girl's dream.

Her furious gaze fells onto him only for a second as she averted her gaze from him to her precious book where it was dropped.

She was honestly disgruntled at the moment, not cause she fell, it was cause her precious book drop.

He strolled towards melissa "I'm apologise. I was in hurry so, Are you alright?" His voice was damn sexy and hot to be real but Melissa didn't gave a damn about him.

Melissa glanced at the book and was about to get her it but Just when she was moving, he ambled ahead and gave his hand to help her out to get up.

Unfortunately, he may have done the biggest mistake of his life. He actually stepped on her precious book by his shoe unknowingly since he was in hurry but due to this, it made Melissa drive crazy like a madman.