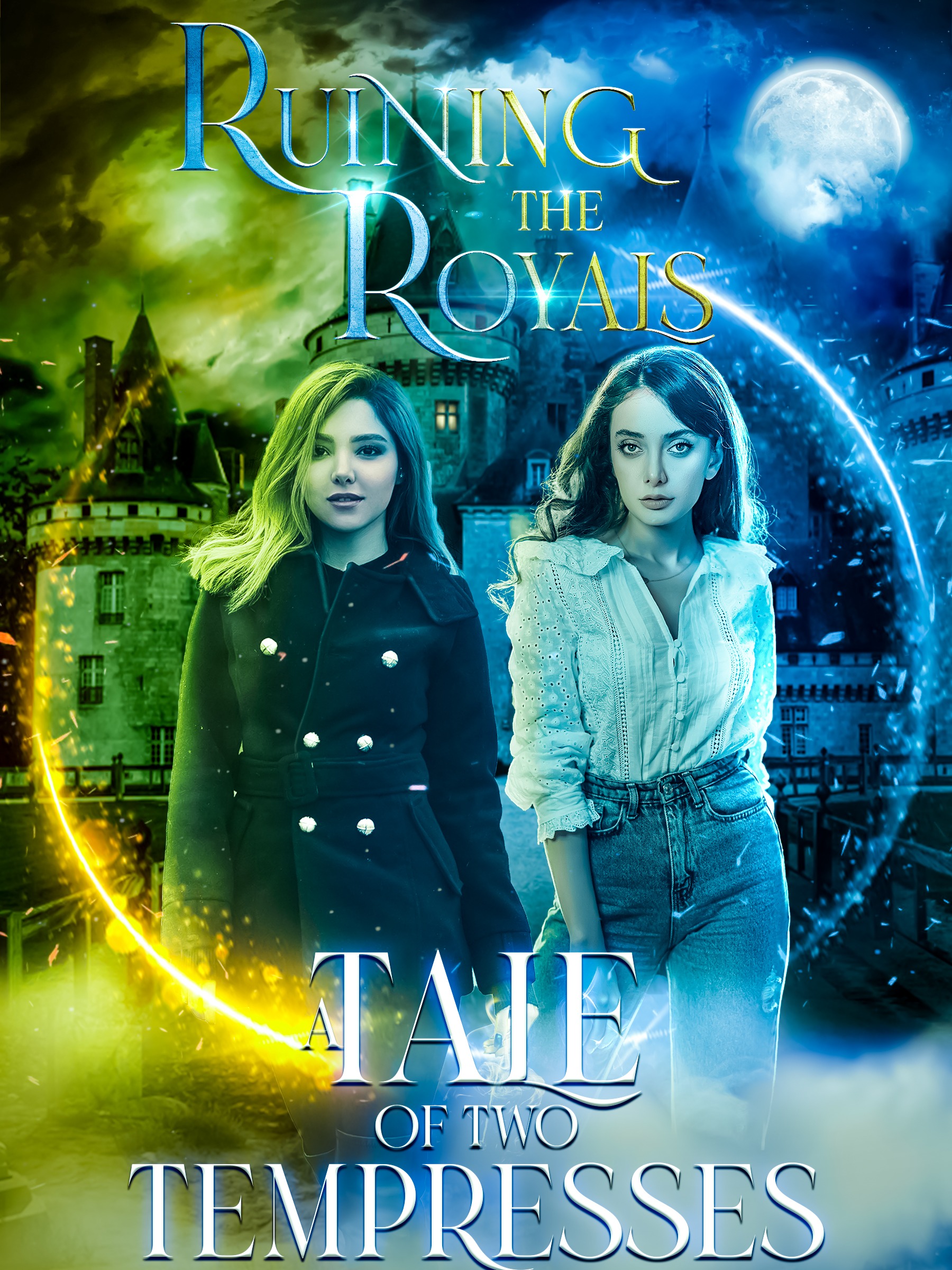 Ruining the Royals: A Tale of Two Temptresses

Everyone undergoes The Becoming the year of their 18th birthday, no exceptions. Best friends Aila and Adreanna have been looking forward to taking over their mothers' business as mediums, so imagine their surprise when they come through The Becoming and are told that their powers are too dangerous? They're shipped off to an elite academy intended for the upper echelon of society, those who are *meant* to have strong powers. Of course, nothing is ever as simple as getting in and getting out, is it? Aila and Adreanna find themselves the center of attention at the Spellbound Academy of Exemplary Magicks. Not only are the four royals, representing each of the elemental realms, against them, but so are their supposed future queens. So how do two unsuspecting ladies handle four devilishly handsome who seem to hate them by virtue of their common upbringing when every force of nature seems to be pushing them together? When push comes to shove, the Aila and Adreanna find themselves forced to show their true powers, which they can't seem to control. Nothing is as it seems, but together, they can do anything, even tame the wild elements. Light and Dark collide as the elements fight for supremacy. Love is found in the most unexpected places. And secret prophecies are exposed in an explosive betrayal of everything the royals think they know.

I look in the mirror, inspecting my reflection carefully.

*Today’s the day, Aila. The Becoming. Everything needs to be perfect.*

I add a little more shadow to my eyes, making the brilliant turquoise color pop. My silvery-blonde hair, which my best friend Adreanna calls ash colored, reflects the light streaming in through my open window. I twist and turn to inspect every inch of myself, pleased with how my bell-sleeved peasant blouse drapes across my bust. Unlike Adreanna, my breasts are a comfortable size 36 C. I don’t envy her heavy as sin 36 DD cups.

The blouse highlights my curves nicely without making them overly prominent, and the linen slacks drape straight down from my butt, making the bubble in the back a little less in-your-face. Adreanna is always telling me to ‘flaunt what you got,’ but I prefer a more subtle look. *She can reel the men in with her sexy style, and I’ll keep them coming with my hidden secrets.*

The thought has me smirking at my reflection in the mirror. Deciding to let my hair hang free, I spin, giggling as it swooshes behind me, coming to rest against the top of my bum when I stand still.

“Aila, hurry your ass up!” comes Adreanna’s shout from downstairs.

“Clearly not, since I don’t hear your sexy steps on the stairs, woman. We’re gonna be late, do you really want to be late for your *Becoming*?”

Grimacing at the horror of the possibility of being late, I tug on my rhinestone sandals and rush downstairs to meet my best friend.

Adreanna and I were born just minutes apart on the same day, in the same hall, of the same hospital. Our mothers bonded over similar circumstances and our similar birth times. Both of us were raised by single mothers, due to the circumstances of life… My father died protecting my mother during the invasion twenty years ago, and Adreanna’s father was never in the picture… her mother doesn’t like to talk about it much, but we did a little digging when we were 14, and discovered that her mother was actually raped. The man who raped her was never caught, but we found the police reports. We were both surprised that she decided to keep Adreanna, given the circumstances, but I’m definitely grateful that she did. We may as well be twins, with how close we are.

“Finally!” shouts Adreanna, throwing her hands up in exasperation as I halt before her.

“Sorry, I didn’t realize how late it is… you look good, by the way.” I tell her, licking my lips suggestively.

She laughs and sashays out the door, a lascivious grin on her face.

“I know, darling, I’m delicious. Now let’s get this show on the road, I want my powers!”

“What powers?” I goad, giggling when she shoots me a baleful glare.

“I guess, I mean, our mothers are both *touched*, so it makes sense that we will be too… What are you hoping for?”

“I want to read the cards and the stars like mom… you?”

“What’s a matter, don’t you look forward to randomly passing out and channeling the gods?” she asks with a laugh.

We catch the bus to The Ritual Center, where all citizens of the Free City of Azreth go during the solstice after their 20th birthday, to undergo *The Becoming*, a ritual where any latent powers or abilities are unlocked. We learned in primary school that *The Becoming* wasn’t always a thing. Before, people just awakened their powers naturally as they aged, and some not at all. Most humans have some sort of latent ability, though they were out of reach once upon a time.

Twenty years ago, *The Invasion* happened. Demons, angels, fae, shifters, and more descended upon our little pocket of reality, and with them they brought diseases and new magics. Supposedly, the magic realms that they previously inhabited could no longer sustain life, so the Royals of the Elemental Domains offered them sanctuary. Prior to their arrival, most of humanity didn’t know that they had magic, but one of the diseases the newcomers brought with them awakened latent abilities in sudden bursts. Many people died in the aftermath, their bodies and minds unable to cope with the unexpected influx of power.

Those whose minds couldn’t handle it sometimes went mad, attacking those around them indiscriminately. That’s how my father died, one of the newly awakened was frenzied with his power. He targeted our family, attacking my pregnant mother while she and my father were out on a date. My father, whose latent powers, if he had any, hadn’t unlocked, intercepted the man and held him off until the authorities arrived.

Mom said she thought everything was fine, until the man got free of the authorities restraining him and launched a bolt of pure energy at her. My father intercepted the energy by throwing himself between her and the bolt. He died before paramedics could arrive.

Once everything calmed down, the royal families of the Elemental Domains, four empires who divide the continent between them, established *The Becoming*. They cast a powerful spell, using the abilities of all four families, which bound all powers of anyone under the age of 20. In order for their powers to be unlocked, an individual must undergo *The Becoming* on the first solstice after their 20th birthday.

We’re in Azreth, one of the few cities on the continent that remains free from the rule of the four royal families. Instead, we have a council who often mediates disputes between the royals, as well as governs the city and the other neutral territories. Azreth is considered neutral territory, so we have a constant influx of citizens from every realm.

“You ok, Ai?” asks Adreanna, touching my shoulder as the bus pauses at a traffic light.

“Yea, sorry, just thinking,” I tell her, shaking my head.

“Who can say for sure… Are you ready for the ritual?”

“I’m not sure… on one hand, I’m excited… Once we’ve been *awakened*, we can join The Shoppe and help our moms… but at the same time, no matter what happens, nothing will ever be the same again.”

“Yea, true. Whatever happens, we’ll face it together,” I tell her with a grin, holding out my right pinky.

Her answering smile has my chest aching. Adreanna truly is the most beautiful woman I’ve ever had the pleasure of meeting. She takes my pinky in hers and pumps our hands twice before dropping my hand and turning back towards the window.

“Together,” she murmurs as she watches the city fly by.

Smiling softly, I admire her. I’ve low-key had a crush on her our whole lives. Men are amazing, of course, but Adreanna is like my other half. My soul mate. She has raven black hair with streaks of deep crimson twinkling from beneath the dark tresses. The color is natural, which has given her endless trouble throughout our lives, with teachers and colleagues insisting that it’s dyed. Her skin is a pale ivory, in contrast to my warm, olive skin tone. Her eyes are so dark that they’re almost black, with little specs of crimson and silver flashing as her emotions play through them.

Where I prefer loose-fitting clothes, Adreanna is all about skintight leather and corsets, which complement her ample assets. She usually has her hair in a braid down to her calves, but today it’s loose, falling to nearly her ankles when she stands. My hair is difficult enough to manage at bum length, so I can’t imagine how hard it is for her to take care of hers.

Today she’s in a striking black and red corset with silver ribbing and a matching skirt that falls to mid-thigh. The look is complemented by thigh-high ‘hooker boots,’ as she likes to call them. She’s got a spiky belt threaded through the loops of the skirt, and a spiked cross, inlaid with rubies, resting between her breasts.

“Stop staring at me, I know I’m gorgeous,” she smirks as she pokes me in the ribs.

“I know, me too… I’m amazing.” She grins at me before turning to face me fully.

“In all seriousness, I love you too, Ai. Whatever comes, we’ll deal with it. Together.”

“As I’ll ever be,” she says with a grin, gently pushing me out of our seat.