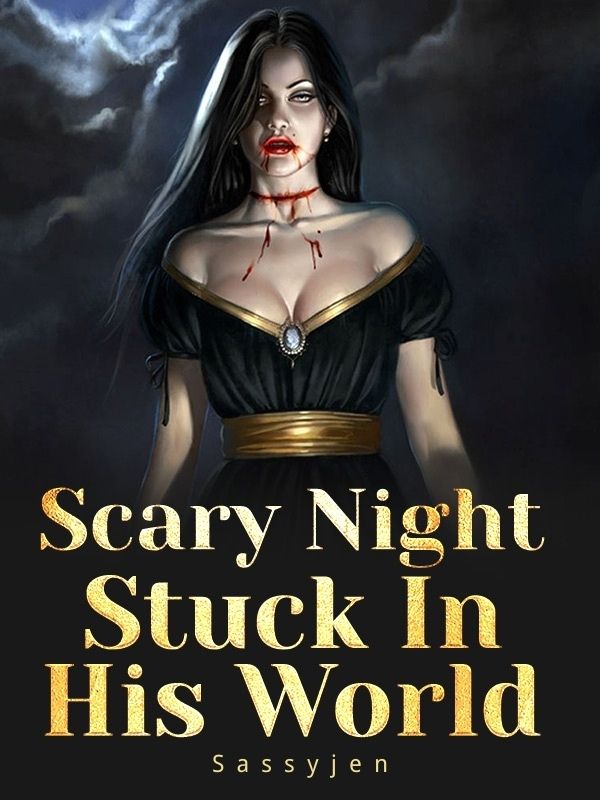 Scary Night Stuck In His World

Meet Amelia, everyone dream girl but very stubborn. Her parents warned her never to go to the cursed house but she ignored it, she falls in love with the demigod she saw there not knowing he was a vampire prince called Dimitro. Halloween period was a perfect plan for her to go with her crew, she is desperate to find out everything about him. " I had a dream, that I was stuck in an unknown place I never knew existed, it was a scary night for me"Now Amelia is stuck along with her friends and those she dislikes in her lover's world meeting a bloody war.She thought the stories about vampires, Lycans, Witches, and Hybrids were fictional not until the day she got stuck, her chances to survive are now in the hands of her lover.After the red moon, lots of mysteries got revealed, Dimitro finding out from his father that he is an abomination, a hybrid.The enemy is closer than they think, many lives were lost, a lot of betrayal, hatred, and love took place.Lorenzo, the alpha mated to a weak Lycan called Nora, also hybrid, her pregnancy brought a great threat.

I so much hate it when the alarm wakes me up, wish I could sleep a little, I rose from my bed then entered the bathroom to have a shower after brushing my teeth.

Immediately I finished, I dried up my body with the towel, I sat facing the mirror as I applied body lotion on my skin then I put on my uniform, I applied a little touch of makeup on my face, then I combed my hair and said, "Amelia guess you are done and you looking awesome, time to go."

I came downstairs and perceived food aroma from the kitchen, I knew it was mom cooking, "yummy" I said, "good morning mom"

I started making breakfast when my parents started talking about the college I will be applying for after am done with high school.

I quickly finish my food then I left for school, "bye mom, bye dad."

I am not in for their conversation this morning cause I know my parents so well, it will always end in an argument.

"My name is Amelia Anthony, I'm 19 years old and also in my final section at Nobles High School, am from Spain, name of my city is Valencia, I'm the cheerleader of my crew but my parents always call me stubborn."

I was taking a walk before boarding a taxi when I took note of a house that was built like a castle, how come I never noticed it at all, I must say if this house wasn't abandoned, it would have been among the top ten buildings in this lane. I finally boarded a taxi and headed to school.

I got to school, my friends were already waiting for me so we could enter our classes together, Sofia and Chloe are my best friends, they mean everything to me and we're very good at dancing, we are called the Starlight.

Now let me tell you a little about us, the Starlight is known as the hottest girls in high school, we don't bully anyone except you deserve to be bullied. I don't have time for boys but my best friends hang out with guys just for fun.

Gael is my very good friend that grew feelings for me but in return, I just want him as a friend, he plays basketball and we cheer for their club.

We heard the sound of the bell, it's time for class, the history teacher came in, I dislike her class so much, she kept saying things which I know is not real, like the vampires for instance and she made mention of the lycans as well, half-human and half-wolf, "what a boring class, I'm feeling dizzy already", I said to Chloe and she laughed.

I was taking a nap in my special room, I love it in the coffin, it's so comfortable. The coffin was opened as I rested inside, my eyes were shut but I can sense and still see things faster this way.

The servants came in with a cup of my drink but they stood watching me, " Prince Dimitro looks so handsome when he's asleep "

" you can say that again, he more handsome than his brother"

" I don't want him to open his eyes, I just want to keep on staring at him, looking at him alone makes my heart happy"

I smiled within me, I know am handsome but I can't stoop so low having sex with my servant as my brother does.

I opened my eyes and they were frightened, " greetings my prince",

I came out from the coffin and took the drink ( blood) and I felt great again, I put on my daylight Amulet, the servant was still staring at me and I asked, "do you have something to say"?

" No my prince sorry yes my prince," one of them said

"Okay I will come with him, you can leave now" and I wink at her.

" not you but for me". They argued when leaving.

I know Gustavo will be busy digging a hole now, he can never change, we may have our differences but I still love him.

Oops my bad, "my name is Dimitro, I am 128 years old and still looking young as ever, son of Primus the great leader of our kind, I once have a lover but something happened, the stuff that happened will be a story for another day."

Sometimes I wonder how the human World will look like, only heard the stories and as for the Lycans, I will make sure I defeat them when the time is right.

I entered my brother's chamber and I guessed right, he was having sex with his servant, "father wants us," I said, " I will join you outside, I hate you so much, you just ruined the fun I was having," he said looking frustrated.

"and I hate you the way you hate me." I threw back at him

I waited and he joined me, yes my brother is still handsome and we are of the same age.

We greeted father, " my great sons time for your training. Firstly you need to learn to be very fast when you sight prey or running from your enemy, relax your mind and increase the strength, there are two deer over there if you can sense the smell of it, I will put on my timer, kill it and bring it back here under 20 seconds"

"Father I got this," my brother said

I did as father instructed and I caught the deer and bite it and it died immediately and I came back to father, I used thirteen seconds but my brother was faster than me he used ten seconds and my father smiled and we proceeded to the other stage.

I took a walk around the woods and saw a door that sparks, this could be the door father was talking about, I walked passed it, I was unaware I have crossed the boundary to the Lycans, immediately I noticed it, I went back cause am not prepared for a fight today.

Sometimes I feel lonely but it's difficult to move on, I caused her death and my brother uses it to weigh me down always, I can't love anymore since the incident, I closed the love chapter from my life.

I haven't found my mate and I don't care to have one, my father being the alpha and leader of our kinds makes me the prince as well, I can get any lycans of my choice.

"Strip naked." I commanded her, the maid took off her clothes, I was in my human state same with her, her boobs are tempting as well, I brought her closed and use my tongue to tickle around her nipple and she responded to every move I made on her body, I pushed her to the bed then I heard the sound of the Lycans, " whoooooooo, " there is an urgent meeting, "now I want to have fun, they helped me ruin everything,", I murmured. I asked her to leave as I put on my clothes.

They held some vampires hostage, this is bad now, am not ready to start a war.

"same with me, I didn't eat much this morning". Sofia added

"Let's go to the cafeteria to get food".

We walked down to the cafeteria then we were interrupted by the mean girls.

I forgot to tell you about the mean girls, they are our rival in school and we hate them with passion.

Chloe said, "hey bitches get out of my way".

And one of the mean girls responded rudely "or what? "

"You will regret ever blocking our way", they started laughing, "the starlight girls are scared of us"

Unexpectedly they threw their food at us.

Seems an unexpected fight is about to happen...