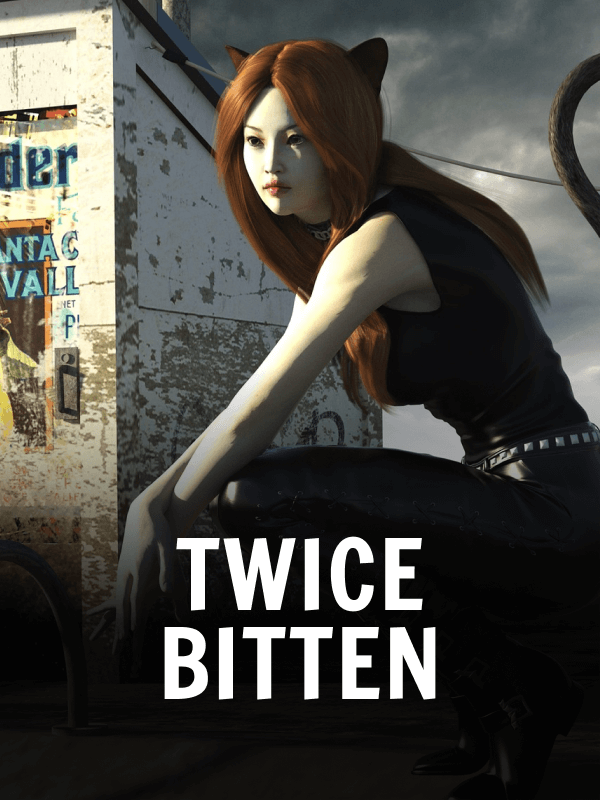 Twice bitten…once saved. Despising the sight of blood isn’t a desirable quality for a vampire, never mind an Enforcer, a vampire sworn to protect a sacred talisman from those seeking its power. Couple that with a twin brother who can feel and taste your every sensation and immortality feels more like a curse. Too bad Gabe and Mathias’ troubles have just begun. When the guardian of their talisman literally falls into their lap, they discover the draw of the pendant goes much deeper than just their pledge. It rekindles their sexual desires, and they’ll use all their vampire tricks to lure Ripley into their bed, and into their withered hearts. But when Ripley discovers the truth, her life and the fate of the talisman are put to the test. Can the men earn back her trust or will this sunset be their last?

“Fuck, Rafe,” slurred Alexander. “Fuck him and his holier than thou attitude.”

Gabe glanced at the bar, his fist clenched around the glass, as he watched the bastard down another drink, tipping the bottle back, exposing his throat. What Gabe wouldn’t give to curl his fingers around the creep’s neck and tear off his arrogant head.

“Easy, brother,” warned Mathias, nodding towards Alexander. “He’s not worth a scene. Not this close to sunrise.”

Gabe uttered a hushed growl, turning back to his drink. He tried to lose himself in the cool feel of the smooth glass against his fingers as he thumbed the lip, wishing the liquor would wash away the twisting feeling in his gut, once and for bloody all. But it didn’t help. Nothing did.

“I had him,” ranted Alexander, the alcohol threading all of his words into one long, garbled syllable. “He wasn’t even fighting back, using the last of his strength to beg his whore of a human to toss him the pendant. Everything was going perfectly until she destroyed the damn thing…bitch! If it hadn’t been for her, I’d be king of this fucking realm by now!” He wiped at the series of small scars etched across his cheek. “My only consolation is that they both probably died along with the talisman. A fitting end for a poor excuse of a vampire. I suppose what they say is true. Once a preacher’s son…always a preacher’s son.”

Gabe felt Mathias tense, and grabbed his brother’s arm before the man stood up and started a war they couldn’t win. Alexander never travelled alone, preferring to send his minions out to test the waters. There might be only a handful of them in the bar, but Gabe knew there were dozens waiting in the shadows. And getting killed before their talisman was found, wasn’t part of the plan.

“Relax, Mathias. He’s just showboating. Give the bastard five more minutes, and he’ll stagger back to his rock for the day. You were right. No sense starting something we can’t finish.”

“But he’s determined to claim one of the remaining talismans. If we eliminate him now, it’ll be one less to face later…if there even is a later.”

Gabe sighed. There was no mistaking the desolate tone to Mathias’ voice. After searching for centuries, neither maintained much hope that they’d find the mysterious pendant they’d been created to protect. Even knowing Rafe had finally discovered his, wasn’t enough to stay the sombre mood. No one had heard from Rafe, or the human girl since, and that didn’t give either of the men much comfort.

“Another vampire will simply take his place, and if it’s all the same, I’d rather face an opponent I know…and Alexander’s greatest downfall is his predictability.”

Mathias huffed, pressing back on the chair as if the damn thing could bring him some form of peace. But Gabe knew there wasn’t any to be found. He turned to watch his drink swirl around in the glass, reflecting pools of light onto the table, when Alexander stumbled across the floor, stopping close to the table.

“Well, well. I’ll be damned. If it isn’t the illustrious, Sir Gabriel, and his simpleton of a brother, Mathias. After all that’s happened over the last year, I never expected to see you two around here…not without your own army.”

Gabe’s lips twitched into a smile as he faced the bastard, shrugging his indifference. “Didn’t know we needed one.”

Alexander laughed, washing his foul breath across Gabe’s face. “Only if you hope to stay alive.”

Mathias scowled, glancing at Alexander over Gabe’s shoulder. “Bugger off. Your breath smells like cheap beer and we’re really not in the mood.”

“From what the ladies say, you two are never in the mood. But that doesn’t surprise me. Denying what you are only makes immortality a waste…just like your buddy Rafe found out when he chose to stand between me and what I want.”

Mathias raised an eyebrow. “From the sounds of it, Rafe won.”

Alexander growled a moment before his face shifted into the hideous beast hiding inside him. He lunged at Mathias, only to end up with his neck curled into Gabe’s hand.

“Separating your head from your shoulders would bring me a rare pleasure I haven’t felt in centuries.” Gabe pulled him closer. “But it won’t serve my purpose.”

Gabe glanced around as a dozen vampires shifted into view, their fangs gleaming in the strained light. He tightened his grip, trying to ignore the drop of dark blood that welled from beneath his thumb as he sank his nails deeper into Alexander’s neck. A roll of nausea washed over him, and he tossed Alexander across the room, grinning when the bastard bounced off the far wall.

Another vampire rushed him, but Mathias stepped in front of him, deflecting the man’s attack and sending him careening into a nearby table. Gabe sensed his brother shift into his vampire form, their connection so strong Gabe’s teeth lengthened in response. He tugged at Mathias’ shirt, silently warning his brother to back off, as Alexander strutted back over, blood still dripping down his neck.

“Is that the best you can do, Gabriel?” Alex wiped at the thin, red line. “How on earth do you plan on destroying us and protecting your precious talisman if you can’t even stand the sight of blood?”

“You won’t be bleeding when I shove a stake through your withered heart.” Gabe cocked half of his mouth into a smile. “I don’t mind fire and ash in the least.”

Alexander laughed, glancing around at the increasing number of vampires. “What makes you think we won’t simply kill you both now?”

Gabe snorted, patting Mathias on the back, as he nodded at the circle of men. “Even you aren’t stupid enough to start a full-fledged fight with dawn already huing the sky. Besides, we both know only an enforcer can activate the talisman. Kill us, and your cherished trinket becomes nothing more than a worthless piece of spun glass.”

Alexander growled, dragging his gaze along Gabe’s skin before nodding at his men, smirking as they drew back, fading out of sight. “Your time is coming to an end, Sir Gabriel…” He took a step back. “Make no mistake. I won’t be denied again.” A dull, grey light illuminated the man’s silhouette as he opened the door and disappeared into the fading shadows.

“Damn.” Mathias nodded at the windows. “We don’t have much time. The sun’s rising.” He grabbed his jacket off the back of the chair. “We should have left before that asshole saw us.”

Gabe huffed. “I won’t crawl away like a frightened rat.”

“No one is questioning your honour. But that little show may have cost us far more than preserving your pride.”