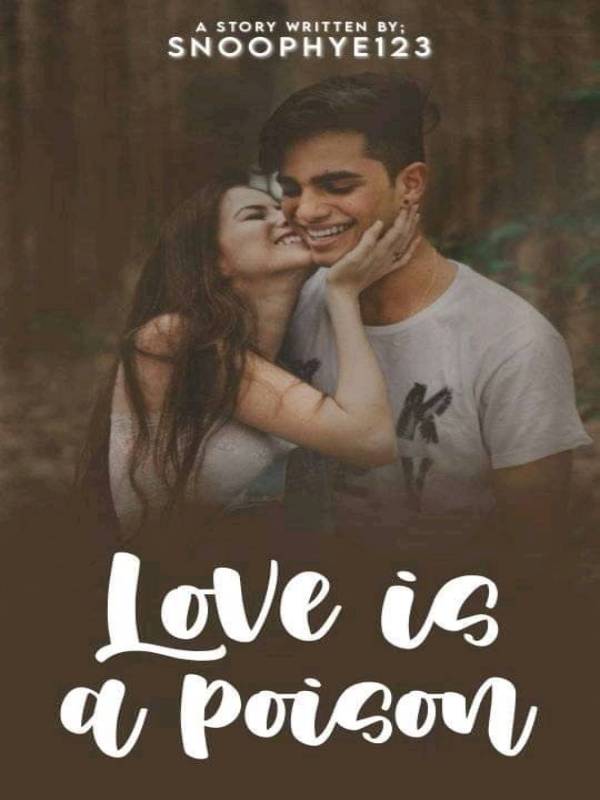 Love is a poison

Although Madelyn Eve Villanueva is already a well-known actress, she still feels painful when she thinks of the rainy day. She made a promise to herself that she would never be affected by his presence. But she didn't expect the wind to change, and the promise she'd made to herself was slowly shattered... "I want to talk to you, and please ... I don't want to see your face again, ever," he said in a serious voice. "Is it a joke? Don't be like that Ethan, I'm nervous about what you're saying," I laughed but I knew it was just an effort. "Do I look like I'm joking with you?" his voice became sarcastic so I blinked and stared at him. He isn't the same man I remember. "E-ethan..what are you saying?""I asked confused. His fists were clenched and his jaw clenched. "Let's b-break up ..." Three words but very painful to listen to."

Ethan and I remained in a relationship from high school to college. Our friends believe that we could never be separated because Ethan was always attached to me everywhere I went. For me, Ethan Gabriel Mercado is an awesome boyfriend who never given me a headache.

Mercado's is one of the wealthiest businesses in Cagayan, with a global reach that includes Manila. Their ancestors are businessmen who have constructed a few structures and factories throughout the country. Such a distinguished family doesn’t like me at all, so every time we get together they think I’m just using Ethan because of his wealth.

Many people want to take Ethan away from me, other people say that Ethan is going to marry someone, but I don't believe it because I want it from Ethan's mouth, and I have a lot of trust in him that he will not abandon the four-year relationship we've formed.

I'm 19, and he's 24, so we're a couple of years apart. While age was not a barrier in our relationship. At first, I didn't believe in him, but I grew to appreciate him even more as time passed.

"Maddie, where are you going?" Mom asked when she saw me fully dressed.

I smiled. "Ethan texted me that if possible I would meet him tonight," I said in a gentle voice while combing my hair.

She sighed. "You probably know that many people say that she will marry someone else. I just don't want to hurt you," she said in a calm voice.

I stopped in my combing and became uneasy. "Mom, I've never trusted what other people say; I want Ethan to say he’s getting married," I said, forcing a smile.

The loss of a deep breath occurred when I turned away. I was a little concerned that what others were saying might be true, but I trusted Ethan. Ethan absolutely loves me and would never replace me for the woman he met for the first time.

“Brother, in the park where we always meet," I said happily while riding the tricycle.

"Why, you seem to be meeting more often," he said teasingly so I laughed.

I giggled. "He told me he had something to say so I just agreed to meet. You know what if he’s going to propose in front of me, right?” I said in a joking voice.

He simply chuckled and led me back to the spot where Ethan and I used to hang out. I thanked him before walking into the park where Ethan was waiting, clutching my bag securely as I looked about.

I took a big breath as I noticed Ethan standing up while crouching. I smiled and waved to the man who was staring at me.

"Ethan!" I shouted in a happy voice and immediately went to him not far away.

I was slowly taken aback to see his black eyes as cold as ice. I blinked and hugged him because I felt I had a problem but I was shocked again when I felt he didn't hug me back.

"What are we going to do here? Date?" I said jokingly but he just looked at me as if what I said was meaningless.

"I want to talk to you, and please ... I don't want to see your face again, ever," he said in a serious voice that was erased by my smile.

"Is it a joke? Don't be like that Ethan, I'm nervous about what you're saying," I laughed but I knew it was just an effort.

"Do I look like I'm joking with you?" his voice became sarcastic so I blinked and stared at him.

He isn't the same man I used to know. Because every time he sees me, he immediately hugs me and I always see his sweet smile. But it’s different now, because when I look into his eyes, I know there’s a problem and I’m nervous.

"E-ethan..what are you saying?" I asked confused.

His fists were clenched and his jaw clenched. "Let's b-break up ..." Three words but very painful to listen to.

I took a deep breath and my eyes widened as I looked at him. My chest throbbed loudly, his eyes averted but I could see his restraint.

"Huh?" it was as if I was deaf to what he said. "You're joking right? You won't be able to break up with me k-because you love me. Is this what your parents told you? To divorce me? Stay away from me? I can understand but just don't leave me, I beg you," I said in a calm voice and touched his arm.

He swallowed and looked at me before saying the word that exploded my world. "I'm getting married ..." he said in a difficult voice and bowed.

I was almost knocked off my feet when his arm was loosened. When I heard what he said, it was as if something stabbed my heart; when I glanced at him, I saw the sparkle in his eyes and the path of my tears at the same moment. As I stared at him, my hands trembled, as did my lips.

"What did I do wrong? Is this a prank? I know you won't get married because you love me, maybe there's another way ..." I took a deep breath and smiled at him. "Maybe ... you can talk to your parents ... c-can't you just talk to your brother? Don't do it to me–"

"I'm getting married so please! I hope you understand that I'm going to have my own family." I jumped at the sudden rise of his voice so he was also stunned and averted his gaze.

I felt a crash in my heart, tears kept flowing in my eyes. I bit my lip and looked at him intently who was now in tears as well.

"You don’t love me anymore?" I find it very difficult to say those words. "C-cause if you love me you won't allow yourself to marry someone else because you love me," I wiped my eyes with the back of my palm.

He bowed and his tears also continued to flow in his eyes. "Y-you didn't do anything ... it's not your fault ..." he said softly so I cried even more.

"You don't love me anymore ..." I repeated and cried even more because I didn't hear anything from him.

He swallowed and sighed. "F-forgive me ..." he said in a low voice and left me alone while crying.

Later, I sobbed as well as laughed. Because of the pain I was experiencing, I was caught in my chest and heaved a sob as it began to rain heavily. I was in excruciating pain and wanted to scream, but I was losing out.

How deceptive the world is, because the only person who gives me courage has completely destroyed me. Why is the world so deceptive? I only have Ethan. Because Ethan promised not to leave me, I'm not sure if I'll laugh or get upset with him.

I gripped my knees because I felt numb and could only feel agony and embarrassment. I was expecting him to stay with me no matter what occurred. Where have you kept your word? The bitterness I felt swept over me like poison. I sobbed because I still couldn't accept it.

And I have to add, Love is a Poison. My system is poisoned by broken love's venom. Toxic and lethal.