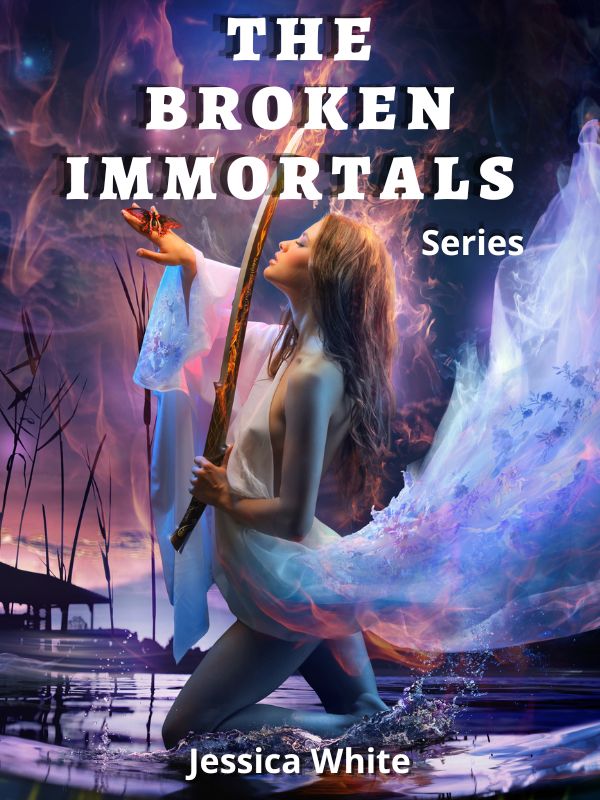 In this Dark Fantasy and Paranormal Romance series of stories, you'll meet a cast of broken, but loveable witches, werewolves, and other Immortals trying their best to save the world. A warlock king on a mission to defeat an ancient enemy, supernatural beings who can't seem to straighten out their love lives, and the secrets that bond them all...Mistreated all his life and forced to climb the ranks under a ruthless dictator, the warlock Daniel Darke believes a brighter tomorrow lies beyond his world. So when he's visited by a beautiful woman in a vision, he follows her through a portal to a supernatural land. Despite being one of Earth's most dreaded warlocks, when Daniel arrives in the City by the Sea, he is welcomed as a trusted friend and protector. But as soon as he comes face to face with the woman of his dreams, memories of other lifetimes come rushing back to him as his powers begin to multiply. With all the memories and visions of things to come laid out before him like the pages of a book, the Darke King readies for the return of an ancient enemy. However, it is a man from his wife's past that he needs to be on alert for.

The Downfall of Daniel

The tingle in his sweaty palms should have been a warning to the young Commander as he passed through the throne room threshold. But when the Emperor calls for you, there is no refusing the command. “Did you believe there was any secret I wouldn’t know about, Daniel?”

While he stood before his Master, Daniel’s black hair fell over his eyes as he closed them and tried to silence his mind. But there was little use. The sneer curling on the decrepit old sorcerer’s face revealed he had learned of Daniel’s treachery. “I can gaze through your mind, young witch.”

With his rotting, wrinkled fingers bending to summon him, the old man motioned for his guards to bring the prisoner forward. The falling sensation in his hands and feet warned Daniel that his mother had entered the room, and he lifted his eyes to find her hands bound as she kneeled before the Emperor.

From beneath the shadow of his gray hood, the Emperor glared at his protégé. “What shall I do with a traitorous witch?” The old wizard raised his brow as a smile crossed his evil lips, and he raised his finger to his forehead. “I know.”

A glint of the knife he took from his belt sent a shiver of icy pain through Daniel’s chest as the Emperor snatched the wide-eyed woman by her hair and sliced through her neck without hesitation.

The delicate white dress she wore was soon drenched in crimson as blood poured down over her body and the spark of life left her dark eyes. The entire world collapsed on Daniel’s shoulders and crushed the once cruel man into nothing.

Her lifeless body slammed to the cold floor, and her life force splashed across the room and sprayed across the young man’s face.

The wicked giggle wiggled its way through Daniel’s devastation, and his eyes rose to meet the old man’s. “Did you really believe I wouldn’t find her? Stupid, arrogant fool. Well, you were wrong, and now you will suffer for that egoism. Young one, you will bow to me and declare your undying allegiance, or you will endure the same fate as this garbage at my feet.”

“I’ll fucking destroy you.” Daniel’s black boots beat against the slick marble floor until the Emperor raised his hand and froze him in place with his invisible grip.

The halted clicks and chokes of amusement gurgled in the villain’s nose. With a flick of his wrist, he flung Daniel across the room and sprung down from his throne. Pushing his cloak off his shoulders as he rushed to his apprentice, the Emperor held out his hand and stole the breath from Daniel’s lungs.

Without even enough air to curse his murderer, Daniel clenched his teeth and stared him in the eyes until he crashed to the floor, with the laughs of his Master echoing around the sterile room.

The ageless monster circled him and clasped his hands behind his back as he laid out his plan. “Now, I will reign down an era of torture upon you like this world has never seen before. By the time I am through, nothing will remain. You will disappear, and no one will even remember you existed. When you came to me, you were nothing, and you will leave me like nothing.”

His trembling hands pushed against the cold floor as Daniel came to stand in defiance of the Emperor’s desire to listen to him grovel. “You can kill me. I don’t care anymore, but I won’t die on my knees.”

The thin, wrinkly cheek under his eyes lifted as a smirk came to the old man’s lips while he imagined all the pain he would inflict on the boy. “As you wish.”

While the Emperor decided on his next move, a whiff of something beautiful swept across Daniel’s face, and his heart raced with a shot of life. A glowing form stepped from behind the monster and glided toward the doomed witch.

Her scarlet hair fell over her shoulder, and her icy blue eyes pierced through her brilliantly illuminated aura. She paused as she came to Daniel’s side, and the light drifted away, revealing her face. Her fingers wove together in front of her chest, and he could feel her fear in his gut. “Please save us, Daniel.”

His ears thumped with the pulsing blood through his veins as he reached out for her, only to slip through the illusion. While the last faint notes of her sweet voice left his ears, goosebumps rose on his arms, and his eyes snapped up to the Emperor. “I’m coming, my love.”

With a new purpose filling the young man’s heart, Daniel felt a spark of ancient magic rising within him.

He looked over at the old warlock before him as the side of his mouth curled and his hair lifted from his shoulders. Out of the palms of his hands, a blue glow rose and rushed over his body, inch by inch.

The hundred wicked whispers in his ears took control, and his arm flinched from his side, then drifted upwards. The Emperor tried to break through the flames encompassing Daniel’s body. Still, not even the old warlock could stop the unworldly ancient creatures that favored Daniel at that moment.

When his finger came to his lips, a blackness crossed Daniel’s eyes as he shook his head, and the evil command fell from his tongue. “Shh.”

The fiery spirits flowed from Daniel’s mouth and engulfed the old wizard in their scalding embrace. He stood over the burning flesh and bone pile until it smoldered down to ashes, then spat on the sad remains as his pointy teeth peeked through his smile. “I don’t bow down to any fucking body; I’m the Master of the Flames.”

His eyes fell on his mother as he shook off the beast inside him and blinked around at his destruction. The dream-like recollection of the past few moments passed before his eyes, and he raised his hands to his face as the long-forgotten feeling of amusement huffed from his chest. “What the fuck is happening?”

Even though she was the only person who ever gave him a second thought, he couldn’t shed a tear for the woman who gave birth to him. The rarely used emotion of guilt gnawed at his throat and made him swallow down the regret of every wrong he’d ever done.

He crouched down and slid his hands beneath her body, then tugged her into his chest with a grit of his teeth. Not a soul dared question the man as the awestruck soldiers parted, and he carried his mother out the fortress gates.

He entered the dead forest and dodged the brittle thorny branches that slapped and ripped at him. When the old remnants of life thinned into a clearing, he laid his mother on the rocky ground and kneeled beside her.

His fingers grazed her icy hand, and he swallowed down all his regret. “You were a wonderful mother; I wish I had been a better son.” His hand closed around hers, and he brought it to his lips, then placed it back across her chest and stood at her feet. “Goodbye, Mother.”

When the prickly tickle rose from his skin and the tiny bumps spread through his body, Daniel brought his palms before his eyes. The blue flame ignited just as the soft crunches of feet against the dead forest floor came to his ears.

With a shudder through his whole body, he glanced to his right in time to see the vision’s fingers drag across the charred bushes.

The once black stems sprouted new buds, and the ugly darkness that covered them was again lush with green life.

Like lightning flashing across the midnight sky, her light rushed his nerves when her fingertips grazed his arm, and the blackness retook his eyes. The hushed voices in his mind gave their directives, and as Daniel looked over his mother, he brought his finger to press his lips. “Shh.”

A brilliant flash of light swept across the woods, and when it cleared, the only thing that remained was the man dressed in black and the reignited army of demons dwelling inside him.