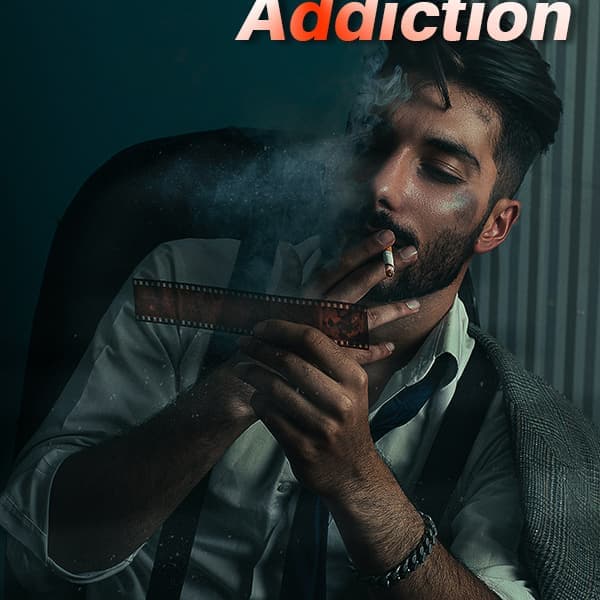 (BOOK ONE OF THE ADDICTION SERIES) "You came as a treasure to me " *** After Larissa Lana Conzalato runs away from home with the help of her uncle Franco. She expected a simple life just like her but only for every thing to turn into a dangerous but beautiful Adventure. Gaetano Di Martino easy going but ruthless, hurt less Mob boss and more handsome for his own good. He had given up on love until he crosses paths with the daughter of his enemy.

Her dark waves flew with the winds.. Her silver liquid eyes watched the moon in the backyard just like every other night she lived.

Her plump red lips formed a beautiful smile that illuminated the beauty of her face.

She was a huge fan of nature and nothing could ever stop her from watching the beautiful stars that never failed to light up the skies daily. Seeing them above adding a beauty to the plain skies became her world of thoughts, peace and comfort.

She knew her father would be back soon, the thought of him intriguing a rush of fear within her body. Him being back concluded to her going back inside as soon as possible.

She flinched as a sweat covered up her fore head.
Just like every daughter she longed for his love, attention and acknowledgement but only his hatred and violence was all she received. It clouded her heart and took away the happiness within her replacing it with a feeling of rejection.

She stood up sadly from her swing bench losing the only smile she always received just from watching the beautiful stars and the moon then turned around walking back into the gigantic house while greeting most of her father's men on the way.

She was always happy to see her father or at least do the only thing that made him find her useful, serving him wine. To him she had no more use than that.

She walked into the living room expecting to find him alone as always but today apparently she had walked in on his meeting with two some business men that wore well tailored suits, their cold expressions standing out and intimidating as there eyes turned to the petite her making her feel like all her flaws were exposed.

She could feel the heat rise up her throat to her cheeks, a feeling of being uncomfortable making her lower her head slightly allowing her Brown wavy hair cover up half of her face.

" Larissa! " Her father's deep voice whisper yelled making her almost jump out of her skin at his dark tone.
She gulped down a lump in her throat and slightly looked up, her eyes coming in contact with his cold silver ones that matched hers perfectly except hers would sparkle.

"Am.. Am so ..sorry" she stumbled over her words not knowing exactly what to even say before running out of the living room.

She couldn't even wait for a response or more stupid of her to think there would have even been one that wouldn't contain violence.
She neither couldn't wait to embarrass herself anymore or her father and make a certain mess of everything.

Just as a few steps had been taken she ended up finding herself trying to listen on her father's conversation with the other men.

"How much do I get on her? " Dante's deep voice made her confused and curious .
May be it was just all about business and not something concerning her allowing herself to push further thoughts at the back of her head

As she got her self to move the next words made her freeze in her steps, in surprise and Shock mixed with disbelief.
Her mind was screaming while her feet had a heart of there own making her run off to her room as a few tears started falling down her face.

"Well well she's beautiful enough for me to double the price.." A dark voice replied with a hint of amusement.

The words still played in her mind like a catchy song not giving her space to think she heard wrong. She couldn't believe he was selling her off to some man she didn't even know or maybe she was thinking a lot than she should be.

She laid on her bed, hiding her face in the blue pillow as tears fell down her eyes continuously. Her silent sobs being muffled by the pillow while a feeling of rejection took over her.
Her father was willing to sell her off, he was eager to get rid of her. All she need was just a little attention and his love just like any daughter but not even once did he refer to her as a daughter, to Dante Conzalato; Larissa Lana Conzalato was a waste of time

She had done all she could in her life just to see at least a proud look on his face or a smile her way but all she received was his disgusted side, his cold shoulder.

As the tears subsided.. She looked up over at her bedside table only were she always kept her mother's photograph.

She sat up as she grabbed it in her grip, pulling it in front of her eyes .
Maria Natalie's Green eyes looked up at her with a beautiful smile on her lips, her dark brown hair being held up in a beautiful messy bun. Larissa ended up hugging the photo so tight to her chest as another set of tears came flowing down slightly pink cheeks

She still wished this loving woman was still around, to hold her and make her smile at times like this, it made her hope she could change all the events that happened that day. The same day that started her all this hatred.
May be her father wouldn't even blame her for all of it all..

Her thoughts were interrupted by her bedroom door being thrown open harshly, almost giving her a heart attack.

She had no time to process what was going on before he grabbed her by the wrist pulling her harshly with him, her mom's portrait falling out of her hands to the bed as her heart beat increased ironically

"Father.." She cried out in pain from his tight grip on her left wrist but as always her cries were nothing to him, what he wanted to do always happened no matter what

Reaching the end of the stairs he let her go roughly that she stumbled her way in front of him, standing face to face with this man she called father. He slapped her hard across the face which sent her down on to floors.
She sat with her hands on the floor and tried looking up at him through her scattered hair that covered all her face

"Father.." She sniffed as he unbuckled his belt, unable to talk through the heavy tears that kept falling from her beautiful eyes

"Next time you will never listen in on any of my conversations" his bitter deep voice playing around in the cubicles of the room, making her flinch. Was he going to punish her what she didn't do, she only heard two sentences.

The whip laid on her skin making her flinch again and gasp, the bitterness of this man towards her came out more like a larva from a volcano. She wondered if once in his life he ever loved her as a daughter

Just like every night;
with it's every touch it left marks on her slightly fair skin.
Certain marks to make her remember and regret every minute of the day her mom died or when she was born

Laying on the cold floors with her wavy hair covering every inch of her face.

Soft sob and hiccups escaping her lips painfully slow while her baby green dress was all covered in her blood, her eyes looked up at the ceiling with all emptiness. It wasn't like she was in her thoughts, she was being taken up by a blank empty world.

Franco knelt down besides her fragile state, his eyes filled with pain and worry for her. He made sure his hands came in contact with her knees and back without hurting her more than she had been

He carried her off the cold tiled floors, her hands hanging in the air as if she didn't acknowledge him, but he understand.

Franco started moving up stairs to where her room was carefully as always, he had promised Maria that he will take care of this young girl, her baby girl but he couldn't even stop the violent side Dante had towards her.

He was like a second father figure to her and he couldn't let her suffer like this when he can do something else to stop this from destroying her.

He knew Maurotti would never take her as his wife.. He would either sell her as a slave to get more of his money he had spent on her and Dante won't care at all.

She deserved more and the precious ones only

As he placed her on the bed in her room he looked at her, his caring instincts towards her kicking in.
" Rissa.. Can you walk.." He asked calmly and her eyes flew open slowly and she shook her head slowly in a no gesture but sincerely she wasn't sure which is which.

She had no words left to say in such a state or any strength left as she thought.
"Let's try baby girl. Don't give up yet" he whispered soothingly while giving her a hand to take. She eyed it then his face and decided to try as he said.

She sat up slowly, her eyes closing again as she winced in pain along sitting properly then grabbed his hand for more help.
She was sincerely curious on what was going on in his mind.