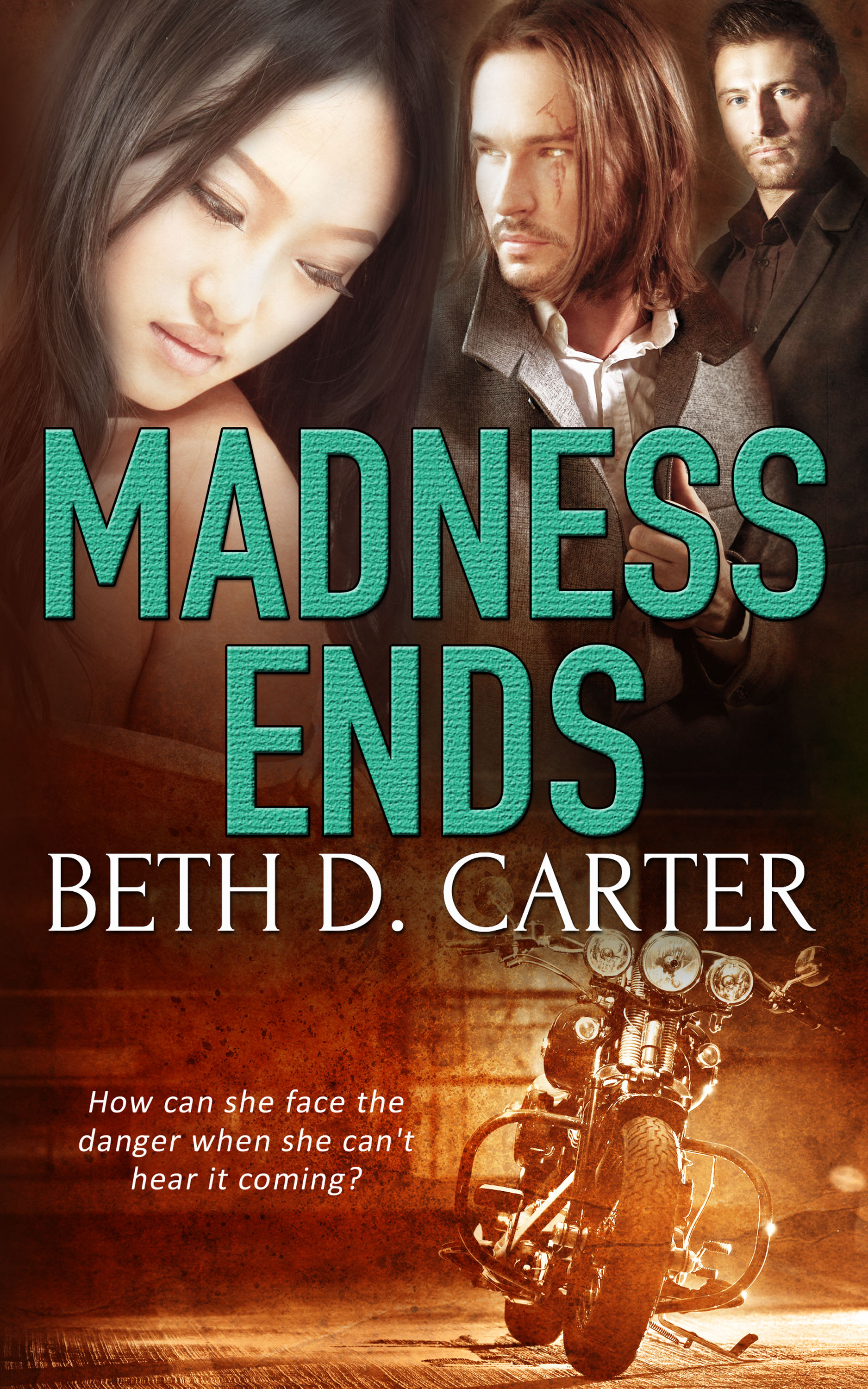 How can she face the danger when she can’t hear it coming? Kaiya Hanazawa lost her hearing as a child and her family cocooned her in protection. As an adult, she was saved from a human trafficking ring, and her grandfather put her behind walls so high they became her prison. Now she’s free and ready to prove that she isn’t as innocent as she looks. Gordon ‘Gabby’ Dixon doesn’t say a word—until he meets Kaiya. His knowledge of sign language helps bridge the attraction between them, but he’d never have Kaiya without his best friend Boone Tempest there to keep Gabby’s nightmares at bay. Kaiya travels with Boone and Gabby to uncover a mystery left by the Men of Hell’s previous club accountant. Little do the three of them realize that a man bent on revenge is following them. At night, passion flares between the threesome, but just before they’re able to reach for the happily ever after, a hailstorm of violence threatens to sweep them away.

Kaiya Hanazawa, her gaze downcast, shuffled in silence behind her grandfather and two of his men into the small hospital. Her grandfather expected demureness from her, especially since she’d been returned after being kidnapped. The word bounced around in her mind like a ricocheting bullet. A shiver ran through her. She’d been very close to being sold into a human trafficking ring when she’d been snatched off the streets while attending a poetry symposium for the deaf. Had it not been for three brave bikers, there was no telling where she’d be. After her stint in a hospital, she’d been sent home and summarily carted back to the ancestral Hanazawa fortress. Forty-eight hours ago, she’d been in Japan, locked up behind walls and told she was there for her protection. Truthfully, she’d been there because her grandfather felt like a failure. He hadn’t been able to protect her parents, and even with all the clout he wielded in Los Angeles, she had still been taken.

Her cousin, Chloe, had come to Bair, Nebraska, to find the man responsible for saving her and to thank him. Now she lay in a hospital bed, shot, and Kaiya didn’t know what to think. Chloe had gone out of her way to free her from her grandfather’s prison and yet, if she died…

Kaiya shook her head. She didn’t want to think about that outcome, because if Chloe didn’t make it, Kaiya would be forced back behind the safeguards of her family’s ancestral home. Guilt slammed into her heart, making it ache. Her cousin fought for her life, and all Kaiya cared about was being a prisoner once more.

Her grandfather stopped at the waiting room and pointed.

“Wait,” he ordered in Japanese.

She bowed and did as he commanded, even though she didn’t want to. What she longed to do was scream at him. Hit him. Give him the finger and tell him to go fuck himself. But she didn’t do any of those things. She never did. Her grandfather was one of the men she feared the most, and fear did many strange things to people.

Kaiya sat in the waiting room. She looked at everything, not missing one single detail. The seats were as comfortable as they could possibly be in a hospital, even though some of them had threadbare cushions. Dirt lined the baseboards, suggesting the cleaning crew didn’t care all that much for cleanliness. The magazines were three months outdated. Kaiya only hoped the staff wasn’t as lackadaisical as the administration seemed.

In the waiting room doorway, two big, muscular men appeared. She shifted her focus. Interest gripped her as the rich smell of leather tickled her nostrils. She inhaled deeply. Both men were tall, filling the doorway with enough brawn to send butterflies dancing through her belly. The name Men of Hell blazed across the backs of their leather jackets, letting her know these men were bikers. A devil face, nestled in flames, sat between the rockers with the club name on top and Bair, Nebraska on the bottom rocker. She’d read plenty of erotic romance to give her all sorts of delicious fantasies, especially from the man with his back toward her. He sported long, dark hair pulled into a small ponytail that would probably cover his shoulders when free. She slipped her gaze lower to a nice ass encased in black denim. She had an urge to bite those firm cheeks. Scuffed black riding boots completed his ensemble. The roughness of his appearance, leather and tattoos, was the complete opposite of her silk and pearls, yet suddenly he was everything she found fascinating.

She couldn’t see the other man he was talking to, but she made out a hand gesture that was all too familiar. Sign language. He’d told the big biker to stay and a second later, he turned, heading into the waiting room. Her gaze met his and he halted. They stared at each other, and Kaiya had the sense of free falling, although she knew she hadn’t moved. His honey-colored eyes contrasted sharply with his tan face. A day’s growth of stubble lined his cheeks and chin, adding a tough texture to his countenance. He wasn’t conventionally handsome by any means. His features were a little too wide, his nose a little too crooked from being obviously broken once or twice. A scar ran down the left side of his face, dissecting his eyebrow but thankfully missing his eye. Yet, there was something about him that drew her. Maybe it was the sorrow and rage trapped in those eyes that spoke to her—two emotions she knew all too well.

He sat next to her, and although he kept his gaze trained away, she couldn’t help but stare at him. He was big and slouched in the chair to rest his head against the back of it. Maybe to keep from looking at her? Kaiya didn’t know for sure. A tattoo crawled up the side of his neck, originating from below his collar. The word LIVE lined his fingers between the first and second knuckles, and she wondered what word graced his other hand. Maybe it was just the bad-boy image that drew her, but she didn’t care. She wanted to talk to him. Taking a deep breath, she leaned over until she was in his line of sight and signed to him.

He swerved his head to look at her so fast she was shocked he didn’t get whiplash. She signed again.

He studied her face, her hands, finally glancing at her ears. From the outside, she knew she looked like a perfect little doll. Makeup expertly applied. Hair flawlessly coiffed. She wore expensive, impeccable clothes. No one knew her inside didn’t match her outside, not even close. Even Chloe assumed she was just a beautiful shell. Everyone saw only what he or she wanted to see, not bothering to notice that deep inside resided a dark and restless woman.

The man straightened and brought his hands up in front of himself. She caught the word RIDE on his other set of fingers, and tingly feelings shot through her. She stared at his big hands, waiting.

Finally, he signed back. “I am Gabby.”

She smiled at him. He was slow, which meant he was out of practice, but knowing they could communicate eased the tightness in her chest. She never got the opportunity to talk to someone who wasn’t part of her grandfather’s world, and for the past year, all she’d been doing was practicing her Japanese sign language. She’d grown up using the American version, and much preferred it.

“Are you visiting someone in the hospital?” she asked.

He shook his head. “My president’s woman was shot.”

Kaiya cocked her head. “My cousin was shot. Chloe.”

“Yes. Chloe,” he responded. He cocked his head. “You’re the new accountant?”

“I don’t know,” she signed. “All I know is that Chloe requested me to come to Bair. I am an accountant, though.”

He stared at her hands in confusion then looked up at her. He spoke. “I’m rusty at sign. I don’t know what you just said.”

She read his lips and nodded, letting him know that she understood. She slowed her hand motions.

Gabby turned his head toward the doorway, and she followed his line of sight to see her grandfather standing there. Like always, a cold hand squeezed her insides whenever he was around. She might have hated living in Japan, but at least she’d been five thousand miles away from him. Hiro Matsumoto glanced from her to Gabby and back again. Disapproval turned his features into a sour frown. Oh yes, she was quite familiar with that look.

“You are now in the employ of Romeo Barrigan,” her grandfather signed. “If you wish to decline the work, come with me.”

Shock swarmed through her, and she blinked, unsure if she’d only imagined the freedom that he offered. Chloe had always been protective of her, ever since she’d gone deaf at the age of ten. What had her cousin given their grandfather in order to get him to let her go?

“Do you wish to stay or leave?” he demanded.

Kaiya got to her feet to face him. “I wish to stay.”

Her grandfather drew his shoulders back, causing him to stand ramrod straight. “If you do this, I will not protect you anymore.”

She bowed at the waist, showing respect. When she stood again, she signed, “I understand.”

Weariness appeared in Hiro’s eyes, causing the fine lines around them to tighten. He suddenly seemed to age right there, looking far older than his seventy some years. “Chloe will need someone to take care of her until she is on her feet again. I am unsure if these men are able to perform that task.”

He opened his mouth as if to say something, but a second later, closed it just as fast. He flexed his jaw angrily.

She held his stare unflinchingly.

Although he had spoken it aloud, she understood him. She bowed again, then he was gone, walking swiftly away while flanked by two lackeys. Hiro Matsumoto wasn’t a good man. He’d made many enemies over the years, so his need for bodyguards was constant, even in the small town of Bair.

Gabby tapped her shoulder to get her attention and she read his lips.

“So you are our new accountant,” he said.

“So it seems,” she signed. Knowing that she wouldn’t be returning to Japan caused happiness to bubble up inside her. “I am free.”

“You weren’t free before?”

She shook her head. Then she grinned, and she knew she probably looked like a crazy woman, but for the first time in a very long time, the shackles constricting her broke free. She felt…limitless.

“I’ve just received a get out of jail card,” she signed.

Gabby chuckled. Or at least, she saw that he did. She couldn’t hear him, of course, and a small pang hit her heart that she’d never know what his laughter sounded like.

He broke off when another person entered the waiting room. Kaiya felt his presence and turned to see a man dressed similar to Gabby with the same leather jacket and cautious expression. His short hair was just as dark, and he stared at her intently. She realized this must be the man he’d been talking to earlier. He didn’t seem as hard-edged as Gabby, but that didn’t make him any less tough or dangerous. His gaze met hers, and again, she had a sense that she’d just met her destiny. Fanciful, perhaps, but maybe it was time for her to believe in fairy tales again.