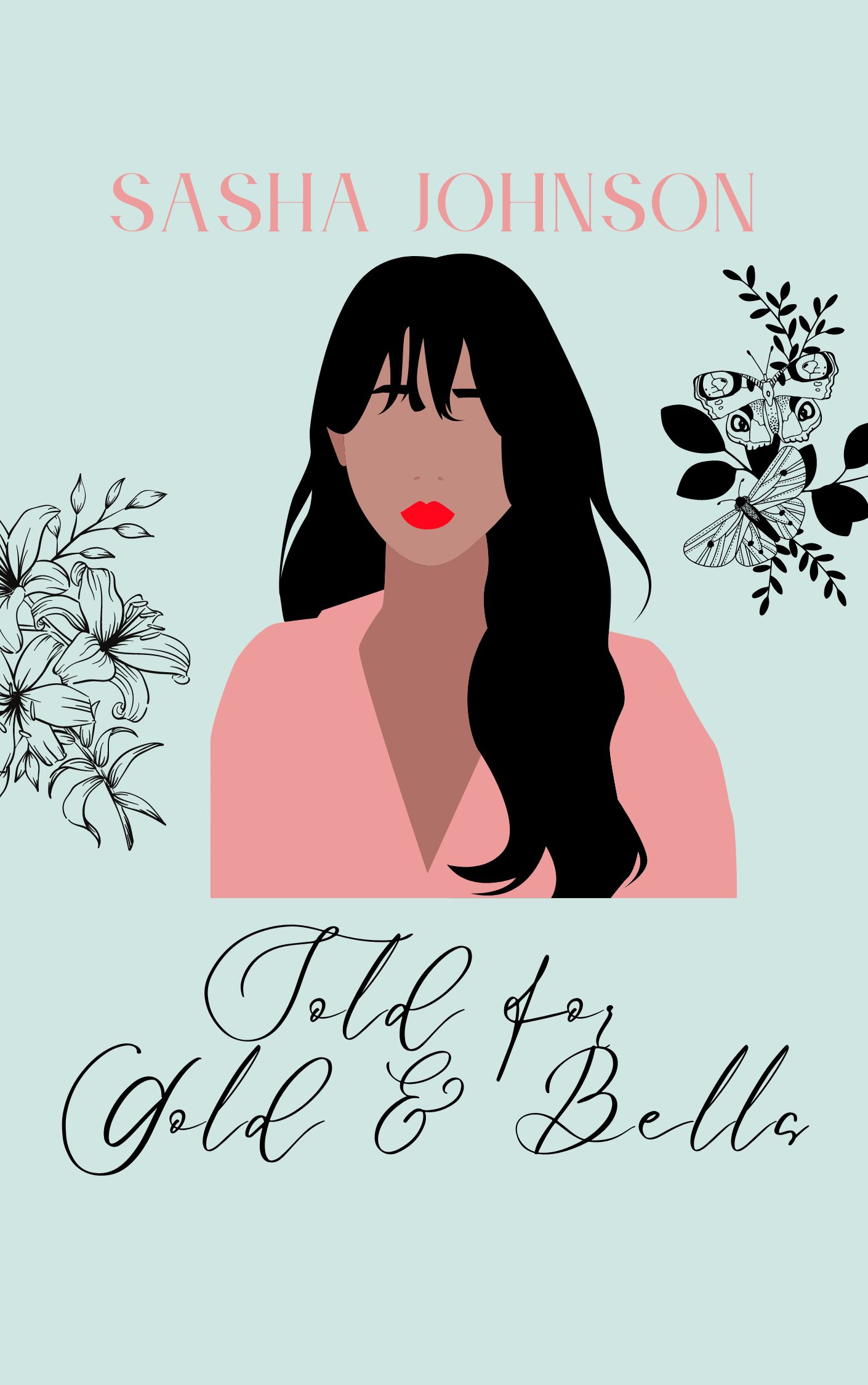 Sold for Bells and Gold

Gia Glass. But I'm not made of glass. I've mingled with sharks and wolves all who have the intension of swallowing me whole. I'm drowning in debt and the only solution I have is to marry a ruthless loan shark or become a high class proustite. That's until Bradley Wolfe shows up in my life, he doesn't save me, but I will have to marry him in order to save my estranged father from his own harrowing fate. Bradley is everything I feared he would be, but in the end will he be my saving grace when my world continues to spiral or the thing that pushes me down?

Rocco shut the door behind him. Closing me out from the rest of the outside world, blocking me from freedom, preventing me from backing out from this deal. Not that I would ever back out. It didn’t take me all night to decide what I had to do. She was my Mom and I wasn’t going to let anyone take away what she worked so hard to achieve. Even if she willing borrowed the money from Rocco, I wasn’t going to sit idly by and watch her go down.

This was my fourth meeting with Rocco. I hated coming to this club even though it was exclusive and lavish it was still the scene of many shady deals. Rocco wasn’t an old sweaty man with a stomach that expanded so much it strained the buttons of his suit that I thought he would be. He was five years older than me. He was extremely handsome with his pushed back black hair, strong jawline and sculptured body.

He took over from his father months earlier. He wasn’t giving me a break, he wanted everything my mother owed and with interest on top. I had a payment in my bag, he laughed at the last one-thousand-dollar payment I brought in last week.

He walked to the back of his black desk. He smirked at me. Last week he expressed how much he wanted to bend me over his desk. I groaned and looked at the painting of a thousand dots on the wall. I bet it was a priceless painting. I bet it would get me out of the debt I was in.

I leaned back in the leather seats. “What a big bad loan shark like you can’t afford an eighty thousand dollar painting?”

He leaned forward so much so I could smell the perfume on his suit. Damn him.

“What is it? Thirty thousand dollars?”

He barked out a laugh, “That isn’t nearly what your mother owes me.”

I wasn’t exactly sure what the exact figure was. I just knew it was a ridiculous amount of money. With everyday that the money wasn’t paid. Five hundred dollars was added to the debt. Yeah, I was screwed.

“I have something that can help your mother.”

Rocco slithered out of his desk and settled himself on the edge of it. He bore down me. His scent was even more intoxicating.

“Alright…” I dragged out my words as long as I could then slipped out of my seat.

“I have a proposal too.” I panted then placed my hands on my hips.

I pressed my lips together. What was he up to?

“I… I want to takeover Mom’s debt. Sign it over to me. I promise I’ll make sure everything is paid I just need time.”

“Oh, I know you’ll pay everything back. Time on the other hand is something you ran out of a long time ago.”

“It’s time I tell you my proposal.” He got up and I swallowed the lump in my throat.

I blinked a couple times and let two seconds of silence pass between us.

“What? Did you just ask me to marry you?”

Rocco shrugged then settled on the edge of his desk. “Seems like it. It’ll erase your debt. Of course it’ll mean no heavy shopping and lavish trips for at least a few months.”

“You’ve got to be joking.” I was about to start passing when Rocco grabbed my arm and pulled me to his chest.

“With every passing day your debt gets bigger and bigger.”

“You don’t need to remind me.”

“Then why do you even need time to think about my offer?”

“Of course I do! This is my whole life we’re talking about here.” I pushed back my hair.

“Or you could ponder my other options just so you know which offer is better.” The smirk on his face didn’t give me much confidence.

“You could come work for me.”

“Yeah, be an exotic dancer or a premium girl.”

Rocco was standing right on front of me. My quivering body excited him.

“I’m sure I don’t need to explain to you what a premium girl is. It looks like you already have an idea.”

He was such a bastard.

“Listen, I have to think about this. Seeing as there are two options now.” I tried my hardest to force out a smile.

Rocco returned to his desk and settled in his chair.

“Seems pretty simple to me Gia. Bind yourself to me in holy matrimony or give up your body to a thousand men for hundreds of years.”

He is such a pig! That wasn’t even enough to describe how much I hated Rocco. I wanted him to smell like shit so I had more to speak ill about him. Unfortunately, the beautiful bastard smelled exotic.

Marry him? I couldn’t do that. I was only twenty-one and I wanted to fall in love naturally. If my true love popped up today I wouldn’t hesitate to run off into the sunset, but I was beyond certain Rocco was not the love of my life. I wanted something real. Besides, I was sure if I gave myself to him I would only belong to him I couldn’t say the same for him.

The wind blew wildly I could barely see the street because my curls were in my face. At least I wore a pencil skirt so I wasn’t worrying about my skirt exposing my underwear. Though, I had worn high hills I feared I would go flying into the dumpsters in some ally.

I scurried into my apartment building. I walked into the elevator and leaned on the wall. I wouldn’t be able to afford this place next month. I already took an advance at work. I had two other part time jobs and little jobs that added fifty dollars to my savings. All of which went to Rocco for the past three months. I groaned as I rummaged my bag for some change. I still needed to eat.

I pulled out a stuffed envelope and gasped.

“Oh, no! What is this doing here?” The elevator opened on my floor.

I was supposed to give it to Rocco. There was over two thousand dollars in this envelope. More than what I’d ever given him.

I stuffed the white envelope in my bag and walked to my apartment. I needed to get out of my heels and put on some pants and a jacket. The weather wasn’t playing nice outside.

I pushed the door open and tossed the keys on the tiny table near my short bookcase by the door. I still had stuff in my tiny apartment. I hadn’t started pawning my items yet. I heard shuffling in the kitchen and froze.

The ruffling in the kitchen stopped.

“Lilly?” I dipped my head to the side.

A woman in a fitted pink and white uniform appeared in the kitchen. I sighed then kicked off my heels.

“Hi mom,” I flopped on the couch, forgetting I had to go back to see Rocco.

He could wait. I wasn’t about to let mom know I was going to see him. She got upset when see spoke about him. His father did the most damage.

“I had a feeling. I brought you groceries and I made dinner. Come eat.”

She shot me a state at would paralyze any mischievous child. I wasn’t seven anymore. Mom still scared me even at twenty-one, but I respected her more than anyone else.

“Come eat Gia.” She marched into the kitchen. That was an order and I was expected to obey.

Which I did. I found her in the kitchen dishing up two plates.

“Mom, you didn’t have to I have enough.”

The mash potatoes hit the plate then she arched a brow at me.

“Enough? Gia, this house was empty when I got here. You haven’t been taking care of yourself. Look at you I bet you lost a couple of pounds.”

I looked down at myself. Maybe I shaved off a few pounds.

“You’re darn right it won’t. I found out you’ve got another job.”

“Part time only,” I scrawled. Who was the nosy person that let the cat out of the bag? Couldn’t be Lilly, but she would tell anyone anything when she was loaded on caffeine.

“I’m not going to let you lose everything you’ve worked hard for.”

She folded her arms and stared me down, “Neither am I. I worked hard to raise my daughter.”

She pushed a mouthwatering plate in front of me. I couldn’t resist.

“Just let it go mom. I’m going to handle this. Rocco offered me a deal as well.” The fork froze between my lips.

What did I open my big mouth? “Yeah, a sort of payment plan. He isn’t all bad, you know.”

Did I add that last part just in case I accepted his marriage proposal? I sure as hell wasn’t going to be a premium girl. Either option stole my chance at true love.

“He isn’t? Well, I guess he must not be all bad if we offered you a deal.”

I shrugged and went back to my plate.

“But, I came to a conclusion that’ll save both of us.”

“I’m giving them the restaurant and the house. That should be enough to cover my debt.”

I set my fork down and settled my gaze on her. How could she say that?

“No, you’ve got people depending on you. I won’t let you.”

Tears burned in the back of my eyes. She couldn’t get rid of the restaurant it was home. All my memories were in that restaurant and in the house my mother worked herself to build. She built both without a dime from my billionaire father. Asking him to help me out of this was a bloody waste of time.

“Finish up your food Gia. I’ll see you tomorrow. I’ll schedule an appointment with Rocco tomorrow.”

“We’re done talking about this.” She snapped.

She picked up her bag and left after a kiss on my cheek.

I groaned and the fork clattered on my empty plate.