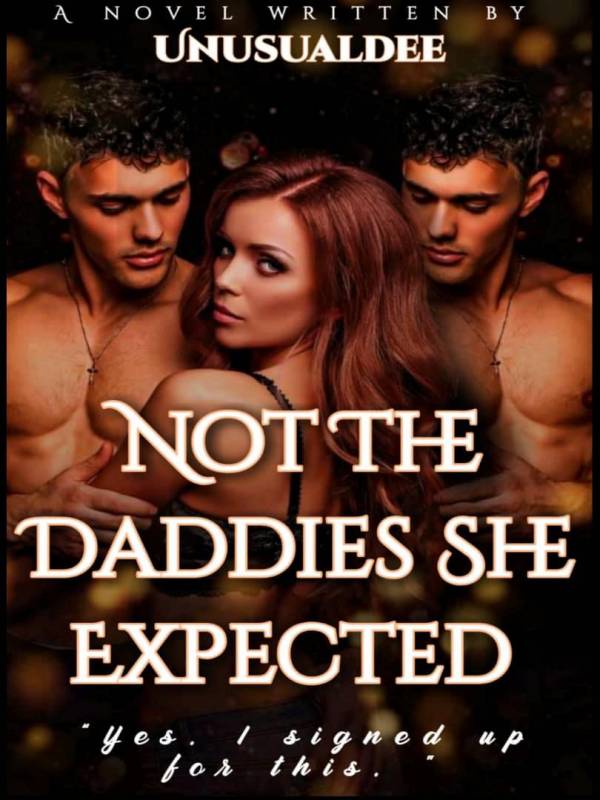 Not the Daddies She Expected

Warning This book contains explicit and matured BDSM/Erotica content!!! Married, sex-deprived Anna didn't expect that her sexual fantasies will be fulfilled to the peak when she decided to accept the invite of the Twins sibling she met on Tumblr until she got to their mansion and she was caged and prisoned after signing a legal consensual form. "Why did you accept our invitation? Tell us again," - Jacob asked Anna as he slapped her already, red swollen cheek. "Because I want you guys to treat me like a sex slave" - Anna gulped.

Anna was about to light up the cigarette she stole from her father after accomplishing the heavy chores that he demanded she must perform every day, if not he would beat and starve her as usual when she heard her father's voice again, coming from the house.

“Anna! Anna! Where's that little b*tch, ” Mr. Walson shouted as he started throwing things around. He was beyond angry, everything wasn't just going as he wanted.

Upon hearing the emergence and the angry voice of her father, Anna knew that this wouldn't be good. She quickly put her cigarette in its pack and quickly returned the pack to where her father always kept it

before screaming her reply to her father. “Father, I'm here, ” Anna shouted twice, so her father wouldn't accuse her of ignoring him which she knew he hated.

“I’ve been calling you since 10 minutes ago, and you are in this same house. Do I look like a joke to you?” Mr. Walton demanded as he pulled Anna hair and landed a huge slap on her face which immediately made Anna flinched and fell down in pain.

“I said do I look like a joke to you? Answer, you little bitch, ” Mr. Walson rained few more heavy slaps on Anna’s cheek and kicked her violently but Anna just endured the abuse because if she opened her mouth, this wouldn't stop anytime soon.

After few minutes of slaps and kicks, Mr. Walson finally calm down as he caught his breathes and kicked the chair wildly in frustration.

But Anna was still mute, with her red swollen cheeks in her hands as tears ran down her cheeks. She quickly sniffed and cleaned her face because she knew that's exactly what her father wanted, seeing her cry and weak. If he turned around and saw her crying, he will continue slapping and kicking her. Apart from alcohol and cigarettes, the other thing her father derived joy from is seeing her miserable.

“Where’s Maria? Is she inside her room?” Mr. Walton asked Anna, after calming down.

“She..she’s not back from school yet, ” Anna stuttered from as she wasn't able to fully form sentence because her cheek was burning of pain.

It wasn't always like this, in fact, the maltreatment and abuse just started two years ago when she was 16 and immediately after her mother's funeral. Her once loving and caring father turned into a bitter man and started maltreating her because he believed she was the cause of her mother’s death which wasn't in any way her fault but he wouldn't even see reasons. He just wanted to digress his pain and grief onto someone, and she was the only one available.

Since that day, her father had told her that there's nothing like education in her life anymore and her only use was to cook, wash and also clean the house like a typical house maid in her own biological father's house. If it wasn't that people always said she was identical to her father, she would have thought that she was adopted by him.

“Since Maria is not around, you better listen well to me now and get the hell out of this house before she comes back. I owed someone a huge soum of the money, I might never be able to pay him back and he in return also needsa contract wife, who will obediently stay in his house when he leaves for business trips and have his kids. You are just an additional weight in my arm and also look at how big and nourished you've become, you are just eating all my food and my precious daughter is even slimmer on compare to you,” Mr. Walton asserted, looking at Anna with disgust clearly noticeable on his wrinkled face.

“The man will be here to pick you up on few minutes, because I've already bethroned you to him and signed the neccesarry papers. So you better do well and be a good wife to him because if you ever come back to this house, I can assure you that your face wouldn't be as smooth as it is now, ” Mr. Walson threatened as he sat down on the couch.

Because he hadn't asked her to stand up and she dreaded receiving another slap and kicks from him, Anna sat down on the tiled floor with her head bend low as she listens to him.

“What are you still sitting and acting like a cripple for? Do you want your future husband to meet you here? Go inside and pack the little rubbish you have and make sure that you hid all those marks on your body. And you better not take anything that's not yours else if I find out, you know what I will do to you, ” Mr. Walson retorted when he saw that Anna was still motionless on the floor.

Immediately after his remark, Anna quickly dragged herself to her room to pack her clothes as he had commanded.

The only thoughts in her heard was….

She was finally going to have a break from her abusive father.

Even if she was going to be a maid to the man and not his wife, she will gladly leave.

After packing, Anna quickly scibbled some words in a paper as a letter for her sister.

I've left to become the wife of the man I've never met or seen because that's our fathers wish. He owed him a huge debt. Don’t look for me or be sad for me. I'm glad to finally leave. See you.

After writing the letter, Anna quickly hide it under the candle lamp because she knew that if it were to land on her father’s hands, she wouldn't even be safe in her so-called future husbands house.

Going through the content in the letter again in her head, Anna tried to verify that she hadn’t exposed too much to her sister. Because, unlike her father, her sister care and they love each other as siblings.

If she's going to miss anything or anyone in this house, it's definitely going to be her sweet curly headed younger sister who looked so much like her mother. Anytime she look at her younger sister, she always see traces of her mother in her eyes. They looked so much alike maybe that was the reason why she was pampered by their father while she was abused instead but she couldn't bring herself to blame Maria.

She was innocent and sweet, she couldn't bring herself to dislike her because their father was a wimp and alcoholic who only abused his eldest daughter and fawn over the younger one because she looked just like his deceased wife.

“What are you doing up there, do I have to drag you out? Can't you hear the car honking!” Mr. Walson shouted at the top of his voice when he saw that the little bitch hasn't come down yet and the man he who he had already sold her to was in their driveway already.

Is she trying to act stubborn with him?

“Anna!” he shouted again, and Anna quickly recollcted her thoughts and ran down stairs.

“Father, I'm here, ” Anna quickly answered when she was in his presence.

Mr. Walson was as angry that he was about to slap her again when he remembered that the old hag was still waiting outside. He reluctantly held himself back and looked at her with disgust.

“He’s already outside, just go and meet him. And remember what I told you, don’t you ever do anything that will make him send you back into this house. Else….” He dragged out as he looked at her work his cold eyes.

“As if, I even want to come back to this shit hole, ” Anna mumbled under her breath as she held her small pack him her hands.

She doesn't have much clothes, her father burnt all.

According to him, she was just a little bit that doesn't deserve a penny from him. So he burnt all her clothes, and the ones in her hands right now are the ones that Maria managed to save from her father's hands.

“Hey, come back here,” Mr. Walson suddenly shouted at Anna. “Are you sure, you didn't take anything that a not yours?” He asked as he pulled the little pack from Anna and dragged it open as he searched for anything that might be valuable.

After seeing that she didn't have anything valuable on her, Mr. Walson turned back and went back to the couch while Anna quickly packed her belongings again.

The only valuable thing she had on her was her mother’s engagement ring which was given to her by her mother in the hospital before she left this world. But her father don't know about it and he had never asked about it.

Departing from her home, Anna took a long glance at it and heaved a long breath. She's leaving…

Car honks immediately brought her out of her daydream and she quickly hurried to where she was hearing the honks from to meet her soon to be husband.