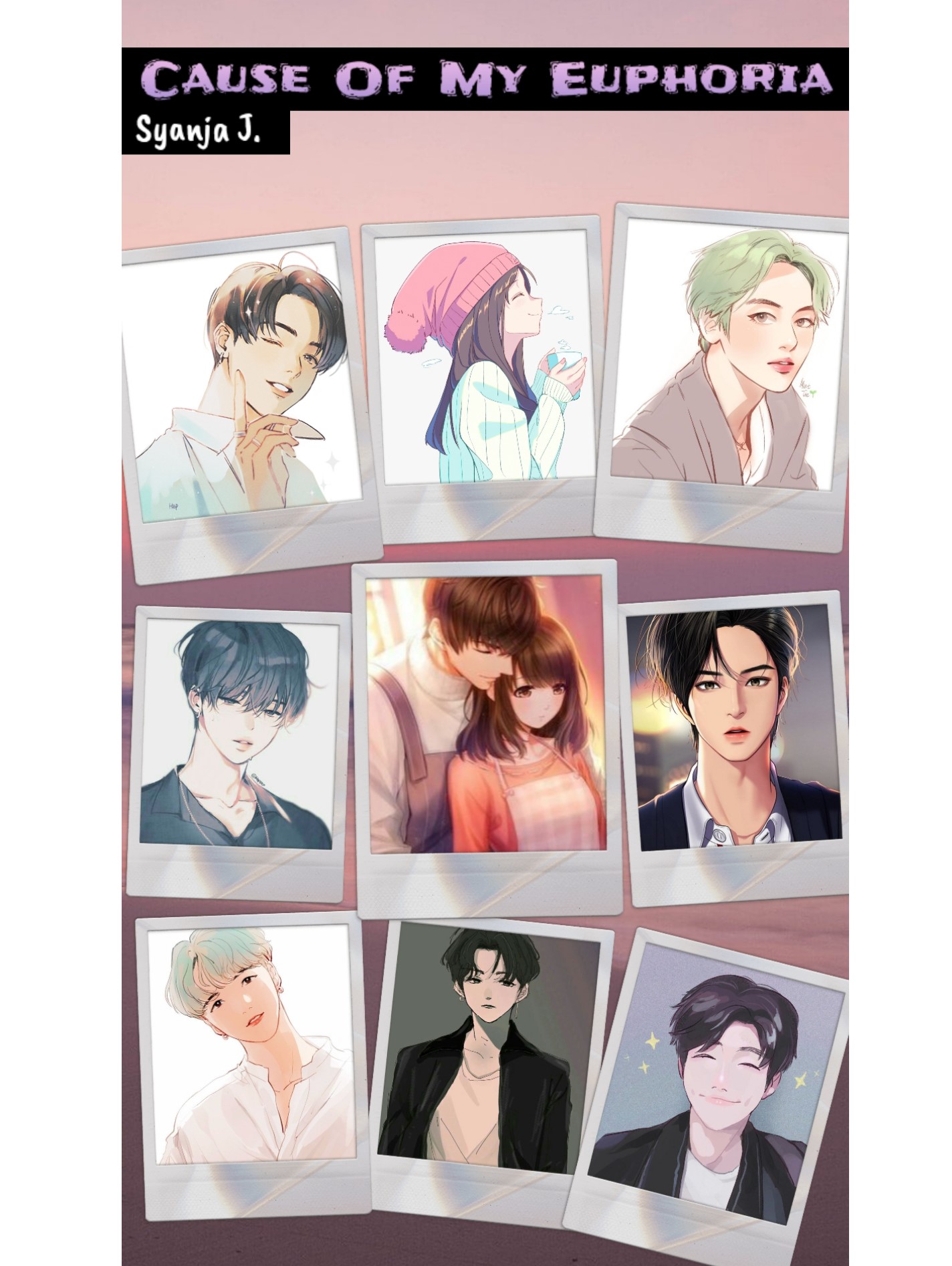 Cause Of My Euphoria

After trying so many jobs and other careers, Syanja finally decided about what she wanted in her life. She wrote novels and was waiting for an opportunity. One day, she got an email from a big company that was far away from her hometown. She didn't take long to accept the offer and signed the agreement with them with no hesitation. The main reason for joining that company was that it is the best company all around the world for authors, and she wants to be successful in her career. One day, the CEO's younger son, Jeong Jung-Hoon, saw her helping someone. Her actions and beauty amazed Jung-Hoon and slowly his feelings started building up for her. His friends and brothers helped him to chase her. After some meetings, they get close to each other and fall in love, but Syanja's ex Hyung-Shi comes back to her life. He met her and tried to take her back to him. Jung-Hoon was also busy with his work and hardly made time to spend with her, because of their different careers. They distanced themselves. Rumours began spreading. They started losing trust in each other and spread their ways and focused on their careers, but both of them didn't know what fate wanted. It wasn't the end of their love. They changed themselves, made their character strong, and met each other again, this time more powerful souls, this time no love but anger. This time, they made each other regret everything they did for each other. They tried everything to make each other down, but it made them closer than before.

Seok Syanja, a 23-year-old novelist, She has a powerful and intriguing personality. Large hazel eyes, long brown hair, a perfect smile, a nice figure, short stature, and an alcoholic voice. A wise young woman, passionate and hardworking, she was mailing another large corporation, crossing her fingers that someone would like it and hire her. She felt more at ease writing at night, when no one could bother her and she could easily concentrate on her work. "Oh. I'm hoping for at least one opportunity to prove myself. That's why I couldn't sleep at night so I could concentrate on my work."

She has been speaking to herself until she receives an e-mail. She reached for her phone right away. She received an email from someone (VIM EMPIRE AND COOPERATION) interested in hiring her as a novelist. When she saw the message, her eyes widened. She began to scream with joy. "Yeah, finally." I have an opportunity. She responded to their message and provided them with her contact information. She eventually received a call from the company.

There was a young lady there. "Hello, Ms. Seok." I hope everything is well with you. My name is Kim Li-No, and I work for VIM EMPIRE AND COOPERATION." Syanja spoke with a lady. The lady requested more information from Syanja and gave her some time to make her decision. Okay, I'll let you know in two days what I've decided. "Now I have to talk to my family and make them agree with my decision," she sighed after a phone call. I can't let it go. This is my fantasy. I didn't give up easily. I've already squandered far too much time. So this time, I'm not going to let anyone take it away from me." She fell asleep. She couldn't sleep even though it was past midnight. She was considering how to persuade her family to agree. She falls asleep after much overthinking.

Syanja was sleeping peacefully in the morning, but when the sunlight hit her face, she groaned and sat on the bed. It was nearly 9:00 a.m. Syanja jumped out of bed and went about her daily routine. Syanja rushed down to the kitchen after a quick shower and sat at the dining table, making everyone frown. She finished her breakfast quickly, which worried her mother, and Syanja then attempted to converse with her mother. "Mom?" Her mother gave her a look. She noticed her daughter was preoccupied with her own thoughts.

She approached her and took her hand in hers. "What's the matter with you, my child?" Syanja smiled as she looked at her mother. I just wanted to let you know that I've been writing novels for a while now and that I worked extremely hard to be chosen.." Syanja's mother gave her a puzzled look. She had no idea what she was talking about. "Could you please explain it to me?" "What are you thinking?" Syanja sighed deeply and told her everything, telling her it was a fantastic opportunity and that she would be able to assist them as well. It's been a long time since they've had so much trouble in recent years. "Mom, after that, I'll be able to financially support you all. Please accept it." Her mother looked at her, as if something was constantly going through her mind. "I'll speak with your father." Syanja thanked her and hugged her tightly. "You are the best mother universal truth." Syanja's mother went to talk to her father in his room.

Syanja prayed and waited for good news. She keeps telling herself to relax. She put her hand on her chest and calmed her racing heart. "OH! I'm hoping Dad will agree with my decision. Her father called her after several minutes. She began to panic. Her hands became cold, and she began to sweat profusely. Her father yelled once more. "I told you to come here, Yanja." Syanja flinched slightly, jumped to her feet, and dashed to his room.

She knocked on the door and waited for a response. "Please come in." She entered the room and stood in front of her mother and father, staring down at the floor, a fearful expression on her face. "What have I heard that is true?" While looking down, she heard her father's angry voice and simply nodded at his question. "Hmmmm? I need your formal reply." She nodded several times right away. "Yes, father. I'd like to have it." Her mother smiled slightly as her father looked at her. "All right, if you can take care of yourself on your own, I'll let you do it." Her face lit up with joy as she hugged him. He stroked her back.

Syanja entered her bedroom and sat on her bed. She photographed Jeong Jung-Hoon while staring at him. She let out a long sigh. I'll be visiting your country. Finally, after so much effort, I was given the opportunity. Perhaps I'll be able to see you. I hope I don't run into you suddenly. I'm overjoyed." She sadly chuckles. I know it's insane, but it's also true that I can't deny it. Maybe it's called love. Because you are the source of my happiness."

Jeong Jung-Hoon, 24, is the youngest CEO of a well-known and prosperous conglomerate. He worked extremely hard to realise his ambitions. He understands the value of time and priorities his work above all else. His childish behaviour can be endearing at times. He understands how to seduce a woman. He exudes charm. In his adorable smile and eyes. It is difficult to make him fall in love because he is far more intelligent than anyone else. He has a lovely figure and the most adorable face.

Jung-Hoon sat with his group members, discussing their project. He is the group's youngest member. They were discussing their upcoming project, which they hoped to complete in a month. They worked extremely hard for it. The project's leader, who is his elder cousin and friend Kim U-Ram, is so serious about the work that he is informing them of some new changes.

Kim U-Ram is the CEO of his own company and is 27 years old. He is one of the wealthiest men in the world and runs a successful business. U-Ram is a sophisticated and refined individual. He has a calm personality, but he can be clumsy at times. U-Ram sighed, leaning against the table. He looked at the contractor, who was always talking. "We need to change some of the steps here, as well as the storyline." "It sounds very familiar." Because the lines sounded similar to those in their previous story, they all agreed with him. The contractor is attempting to convince them to accept their decision. "You know, we made your stories sound good, and now you're urging our work into question?" U-Ram remained silent for a while. They all exchanged glances and made eye contact. One of them was irritated by the contractor's decision.

Min Ha-Yoon kept calming himself, but it was starting to get on his nerves. He looked at Kim U-Ram and slammed his palms on the table, making everyone flinch. Min Ha-Yoon is a partner in Kim's company and is twenty-eight years old. He was a 50% shareholder in U-new Ram's company and one of the wealthiest men in the country. He avoided talking and was cold-hearted, but no one could mess with his boys. "We know you improved our stories, but don't forget you earned money from us as well."

They all grinned as they left the office. The contractor agreed with their decision as well. They have to because they are so well-known all over the world that they simply cannot afford to lose the contract. U-Ram cast a glance at Ha-Yoon. Ha-Yoon gives him a friendly smile. "What? "I told you not to ask for them, and what I said was true." U-Ram rolled his eyes, knowing Ha-Yoon was correct. Nothing was wrong with what he said in the conference room. They got in their car and drove away, leaving the company in their immediate aftermath.