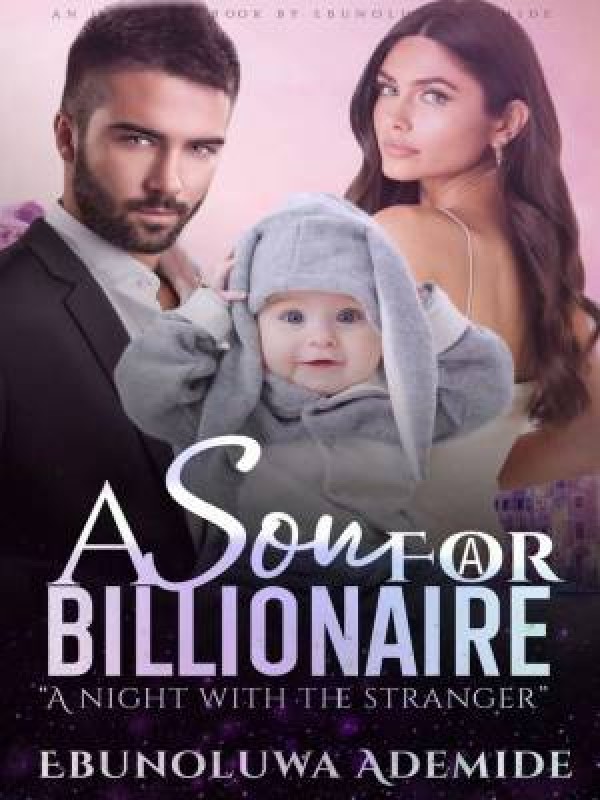 A son for a billionaire

Ivy Rivera, eighteen years old was known to be the girl from the wrong side of the river. Everyone in Winslow, Arizona, a small town where she grew up looked down on her and she was labeled a jinx.Ivy Rivera's life changed after spending a whole night with a stranger who showed her love and attention she had never received even from her parents.Soon Ivy found out that she was pregnant, and to avoid being mocked by people, she left the small town to start a new life in Los Angeles. Ivy Rivera locked up her past life to focus on her career as a photographer. Her top priority was to give her child the life he deserved and the love she never received as a child from her parents. One day, Ivy found the stranger she had a night with ten years ago. Feelings would stir up but would Ivy be willing to let the stranger near her son? Would she set things aside and let love overpower the doubt and fear she has been keeping for years? An eye-opening love story and family drama.

Leroy was playing a video game in his room when he remembered that his mom had promised to get him a super hero comic book this weekend. He didn’t want to lose the game to the robot playing with him but then the super hero comic book was more important. Then Leroy jumped nimbly to his feet, ran out of his bedroom and motioned towards the kitchen to talk to his mom.

“Mom! Mom! Mom!” Leroy screamed as he entered the kitchen where his mom was preparing dinner.

Ivy jumped in fear thinking something bad has happened to her soon. “Leroy! Are you alright?” She asked in a worried tone with her eyes checking out to see if he has gotten hurt anywhere.

Ivy went ahead o him. “No..you don’t look fine? Baby did you go out for a run again?” She asked with a raised eyebrow.

“No mom! I only ran from my room to the kitchen!” Leroy answered.

“But..baby I have always told you to be careful about running around the house. You might slip and fall.” She pointed at him.

Leroy straightened after the panting fit stopped. “I just remembered that you promised me something, so please can I get it now?” He asked.

“Baby, what is it you want to get from me?” Ivy asked, pretending not to know.

Leroy rolled his eyes. “My super hero comic book!” He reminded her in a slightly raised tone.

“Baby, do you think I will get you a super hero comic book again?” Ivy shook her head as she went back to what she was doing before Leroy stormed into the kitchen.

“Come on mom, you promised to get to me one.” Leroy said.

“Oh well you see baby, I am taking back my promise.” Ivy grabbed a napkin to bring down the pot from the gas.

“But why mom?!” Leroy requested.

“You have refused to read your books and all you ever did was play your time away on your video game and you expect me to reward you?” She stood at an akimbo.

Leroy sighed. “Come on mom, I -“ Ivy interrupted her son.

“And you wandered away from me in a public place yesterday and still expect to be rewarded?” Ivy asked in the sternest voice she could muster.

She noticed the look of knowledge register on Leroy’s eyes followed by a look of shame.

“I am sorry about yesterday mom, I only went to find some super hero comic books. I didn't mean to scare you.” Leroy apologized with a remorseful look on his face.

Ivy felt herself cave in the face of his remorse. “Don't ever do it again, I couldn't find you and I searched through the entire area screaming like I was insane.”

Leroy went ahead to embrace his mom. “Ugh mom I said that I am sorry and I also promise to make it up to you.” He tilted up his face to look at her.

“Thank you mom, so will you please get me the new superhero comic book collection?” Leroy asked as he pulled away from his mom.

Ivy cupped his jaw and flashed him a smile. She reminisced about how she had gotten this smart and intelligent child and then how much she had accomplished in the ten years. Ivy remembered that she had left her parent's house as an unlucky one and was labeled a jinx. She was one whose mother had conceived and seen as a bad luck to the family.

At the time of her birth, her father had lost his job and was involved in a fatal accident which almost took away his life. So many bad occurrences had surrounded her birth and It was a legacy that proved impossible to live down with no matter how hard Ivy tried. So in the end she had done her best to live up to it.

It had been so lonely for her to live without her family and that had made her cry herself to sleep every night.

“Mommy..can I get it now?” Leroy repeated snapping Ivy out of reverie.

“Yes..Yes baby..I will get it for you. But you should always remember to read your books and don’t wander away from me because anything can happen to you especially in such rowdy place as a grocery store.” She stated it clearly to her son.

Leroy stared at his mom in disbelief. “Come on mom, don’t think like that, nothing bad is going to happen to me.” He embraced her again.

“You can't say nothing bad will happen. Bad things are bound to happen but we should always pray to God to protect us.” Ivy said with a shrug.

God knows plenty of bad thing had happened to her, more than enough that she had left her parents house and cut her sister Emily from her life in her bid for survival.

“Baby..I know you are sorry about it.” Ivy grazed his cheeks with her knuckles.

“Mom..I promised that I won't do it again.” Leroy added quickly.

Ivy shook her head. “Good baby, I will pin down your promise because next time I won't be nice to you.” Ivy hugged him and rubbed his back even as she made this threat.

Ivy leaned down to press a kiss on her son’s forehead. “I love you.” She said.

“I love you too.” Leroy responded as he hugged his mom tighter.

Ivy knew she was indeed blessed to have him. Prior to his arrival Ivy had broken down in the ultrasound room when she found out she was having a baby boy. But from the moment he had entered into this world, Leroy had been the most gorgeous creature.

Leroy made everyday an adventure and Ivy wouldn't trade him for anything in the world.

“I prepared your favorite dinner.” Ivy announced as she pulled away from her son.

“Yes..please sit so we can have dinner.” Ivy said.

Leroy’s eyes beamed with happiness. “Thank you mom!” He exclaimed as he went ahead to take his sit at the favorite spot on the dinning set.

“So about your comic book, have you checked out if it is available at any store around the area.” Ivy asked.

“Yes mom, it is available at every store in New York now and I am pretty sure it will be available in stores around Los Angeles by weekend!” Leroy replied as his mom dished out their meals.

“Alright..I will make out time so we can get it this weekend.” Ivy said.

“Is that a promise again mom?” Leroy asked.

“Yes baby..I promise.” Ivy answered as she crossed her hands over her chest and watched her son with endearment in her eyes.

And then Leroy rattled on about his plans to get more super hero comic books.