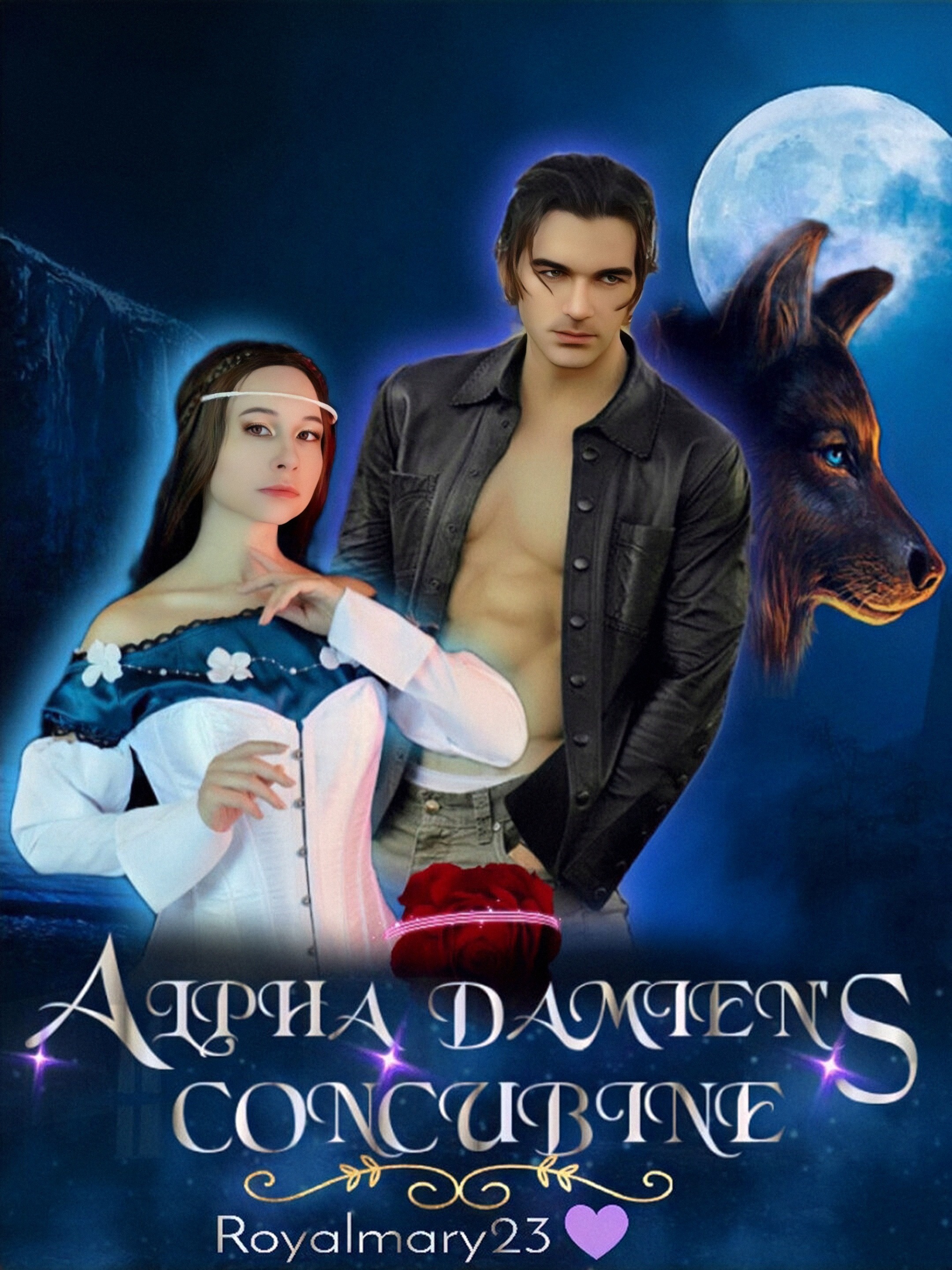 His lips almost touched my earlobe as he whispered, with his actions sending shivers down my spine "Because you are my mate, dummy.." ~~ Damien, the Alpha of the Blue Moon pack has been yearning for his mate for over nine years. He finally collides with his mate who got auctioned for sale. "Her scents alone was intoxicating, she scents of strawberries, roses, and fountain water" ~~ Damien bought his mate, Samantha and he made her stay in his pack as one of his concubines. What happens when he can't make his mate the Luna of his pack because he is being threatened by his wife to expose his deep secrets?

The soft mutter of voices...

I rubbed my hands quietly as I wondered why the meeting did not begin earlier this evening.

A loud cough echoed in the hall and my heart leaped for joy. Finally...

"This meeting is for everyone. We called for it because of the urgent need to have a king. We all need a leader, a true king. The one with a cold and brutal heart, one who led before and will lead again" The elder, Elder Scrolls uttered loudly as the other vampires chorused in jubilation.

His thin, dried lips widened with a smile and he continued.

"I and the council thought about this and the one to be awakened as our next king is Amy!" He continued, and the noise of jubilation died down.

“Why Amy? Other vampires are capable of ruling over our troops” Yaju spoke. His voice grates me. How I wish we were not of the same clan

"My father served for over a hundred decades. He deserves this title and as his first daughter and only child, I volunteer to awaken him from his coffin," I spoke with confidence and murmurs filled the hall.

The councils whispered to each other and Elder Scrolls glared at my right side. I looked there also and I saw Eric, he wore a smirk on his face as a wicked smile appeared on his face.

“I'm also against Amy being our king” Eric glared at me as I huffed. He and his father, Yaju have always been against me after the incident that occurred ten years ago.

"This is total disrespect! How dare you stand against the council's decision!” Elder Scrolls declared with a loud, roaring voice and everyone bowed. This is a form of respect given to the councils and elders because they are next to the king and they also appoint the next king after their bloody ritual. Who wouldn't want to rule the vampires and have everyone under their feet? Even the brats among us respect them.

After a deep sigh, Elder Scrolls continued his speech, this time, his voice became calm and friendly.

“Amy will be awakened as per the council's decision. No one is allowed to object or say anything about that.“

I smiled at the thought of being respected by the others and kicking Eric's butt out of his job.

“The custom to let the first child wake the father, Samantha will awaken her father," My heart rejoiced and I glimpsed at Eric and Yaju's disappointed face.

"Samantha is the first child. Yeah, she is. But our female vampires have proven to be more powerful, but she.….she has proven to be useless and powerless." I was about to utter a word and a piece of my mind at Eric's statement but Arci stopped me. Arci let go of my hand and I lowered my fist in patience.

"What if she fails in awakening her father? She is not even one of us. She is a weakling just like the humans. I would wish to perform the duty as Lord Amy's right hand to awaken Lord Amy." Eric said as he walked back to his position

I clenched my fist. If not for the councils, I would have chanted a spell to lock him up in another world entirely.

Murmurs filled the hall as I wondered who they would support, me or that white, biting, and sucking creature named Eric. I so wish to awake my father so that I can tell him how long I suffered with his right-hand man.

The councils whispered to the elder and the hall became silent.

No! I can't trust him with my father's coffin. What if he is helping the other vampires that are against my father? No, I can't risk the opportunity to see my father again after ten years of losing him to a coffin and my mother being cremated.

"Eric, we can't break the rules and customs because of capabilities.." The elder spoke as I smirked at Eric, even though I was being insulted. He clenched his fist as he opened his mouth to speak.

"No more statement, Eric. Samantha will awaken her father” Elder Scrolls uttered as my heart rejoiced again. It must have felt like a slap on Eric's face. More than what he thinks is to come. I will make sure I end his life myself.

"Eric, you can accompany Samantha with your men, that way, you are also doing your duty." A vampire among the council said as an evil smile crept on Eric's face.

"It will be an honor, my Lord." He curtsied.

"You may all return to your domains." Elder Scrolls stated and everyone left the hall-including I and Arci. Arci was my only support and friend, though, she is Yaju's daughter, Eric's younger sister. She aged hundred years last year and I am so excited that I have her by my side

"I feel like punching his face so hard that no one would want to look at his face," Arci said as she punched the wall, making it break and fall apart

Fortunately, her vampire features are visible unlike me.

I have no sharp canine, fast movement, or even a strong body. The only feature in me is that of my mother, a sorceress after the incident that happened ten years ago.

"Samantha?" Arci waved at my face and I pushed my thoughts aside.

"Were you even listening to what I have been saying?"

Something bumped into me quickly. I turned back to see what bumped into me and I sighted two vampires holding a man stranded in chains, his face and body looked dirty and he was pushed into the hall hurriedly.

"How could you bump into my friend that way?" Arci yelled as I ignored what happened.

"Ignore them," I replied. It's normal to see someone like him chained into the council's hall. Well, demons and vampires have been rivals since their development.

I strode out and I sighted Eric by the gate.

"Here we go again," Arci whispered as she rolled her eyes.

Eric glared at me and then at Arci.

"Arci, go into the car right now." He ordered and Arci held my hand.

"I am going to stay at Samantha's house," Arci replied and I grinned

"Can't you let her stay at my house?" I queried with a fake smile drawn on my face.

"Arci, you should listen to your elder brother," I advised and she frowned.

"He is not my brother. He is just that dirty piece of shit that bullies you." Arci replied as I faced her.

"But I think you should go with him. You are safer with him since I am not as strong as he is." I replied and she embraced me with a peck on my cheek.

"You are not weak, Eric is just a jerk," she replied as Eric clapped. I sighted Arci's father from far away and I nudged her elbow. She turned back and also sighted her father.

"We will talk later," she said hurriedly as I smiled at her. Her family hates me, especially her father because of his father's kingship. Arci entered the car quickly and faced back. I waved at her and she waved back.

"Whatever spell you used, I will break all of it," Eric smirked. He walked into the car as the car sped away. I drove home and I met my magic instructor, Charles.

Charles is a sorcerer and he has been my magic instructor since I was young.

“Can we take a day off training?“ His voice cracked and I was shocked

“Is anything wrong? Seriously, you never take a day off, what happened today?“

“The councils need me because of the demon they caught at the river bank. He is a stubborn one, he is also the brother of the demon king” He replied as his cold eyes glanced at me

“I will be back sooner or later,” I noticed the small bag he held and I became worried

“Later? What do you mean by later?“ I asked and he walked away, ignoring my questions.

Well, it's good we took a day off. No training or nagging, I will spend the rest of my day sleeping….

I felt a beam of light directed at my face. I jolted from sleep immediately. I opened my eyes widely and I saw a pair of red-colored eyes, a few inches from my face. The eyes blinked at my face as I noticed the sharp fangs that were exposed.

I rolled away from my position as my heart raced. I balanced my body as I was prepared for karate.

I examined the invader that I assumed was in my room. Eric held a torchlight and he tilted his head. I threw a pillow at him and he was quick to hold it.

AUTHOR'S NOTE: Hello, thank you for reading! Please leave a comment to help my book grow, and to also inform me about any error or mistakes. Love you all!