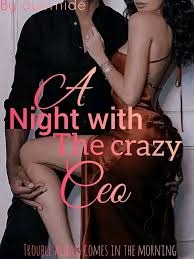 A Night With The Crazy CEO

What happens when a crazy waitress Brianna meets a hot,crazy billionaire Adrian? Will they fall in love at first sight or will they hate each other? What will transpire between them?   Adrian Carter is the CEO of AC organizations. He owns companies, boutiques, restaurants and so on. Half of the industries in California are under his name. He is the richest bachelor in the country and also part of the richest men in the world. Oh I forgot to mention that he is as hot as hell and almost all the ladies are crushing on him. One thing about him is that he easily loses his temper.   Brianna Jackson is a beautiful, crazy and sassy lady. She came from a poor family of three consisting of her mother, sister and herself. She lost her father at a very tender age so the burden of taking care of them had been on her mother. Currently, her mother has been diagnosed of anemia and it is developing rapidly so she had to drop out of school to take care of her family. Years later, the money she's realizing from her job is not enough to fend for them so she went in search of a well-paying job. What happens when the crazy CEO comes across the sassy lady? Will something transpire between them? Find out in this story.

I was at the restaurant where I was working an afternoon shift. I work as a waitress and currently I am watching my best friend and also my colleague Cherry running around in the restaurant's kitchen trying to put things together for customers to eat.

"Brianna!!!! What the hell are you doing sitting around instead of taking customers orders?!!!" That was the manager's voice.

'I'm in trouble'. I thought inwardly. Wanna know why,the manager hates employees sitting around when there are no customers so she prefers us finding something to do to keep ourselves busy rather than resting.

"No customers are around at the moment so I wanted to rest for a little while". I answered nervously.

"Well some people just came in so go take their orders". She said.

I took my notepad and pen then walked over to the new customers who are already occupying a table.

"Good afternoon,my name's Brianna what would you like to order?". I asked the two handsome men sitting at the table.

"I will like to have a plate of pasta and a glass of orange juice". Came the first reply. I jotted it down and waited for the second guy's order.

"What would you like to have?". I asked the other guy impatiently but he just kept quiet. I was starting to lose my patience when the first guy told me to get him what he ordered but with a glass of apple juice.

I walked back to the kitchen to get their orders. As I was walking back to their table and got closer,I tripped and everything in my hands fell on the quiet guy. I gasped in shock when he stood up angrily because if this was to be a movie steam would be emitting from his face.


I got up from my seat furiously when the hot pasta burned my skin. I was already in a bad mood because my best friend,Manuel forced me here to grab a bite when I was in the middle of sorting out some files. The clumsy waitress just had to ruin my mood totally. I dragged her up roughly from the floor and held her arm tightly.

"Let me go!" The waitress yelled.

"Where is the manager?!!!" I shouted angrily.

"Is this how the employees treat customers in my restaurant?" I demanded from the manager annoyed.

"No sir. I'm sure it was a mistake". She replied nervously.

"I don't care. I want this lady out of this place and the next time I come back here and find her consider your job gone". I said.

I dropped the lady's hand. The manager dragged her a little far from where I am and said some things to her. I was a little confused when she came back to where I was but it was not for long. She kicked me very hard where the sun never shines. I  groaned in pain.

"I guess I have nothing to lose since I've been fired already". She stated already going out of the restaurant while I just stood there watching her walk out.

I stomped out of the restaurant almost limping.

"You shouldn't have gotten her fired". Manuel stated when we got to the car. I glared at him to shut up and he did because he knows better than to exchange words with me when I am angry.

"It's all your fault. If you didn't force me here I would still be in my office and not have gotten kicked at in my dick". I stated annoyed.

I ran out of the club almost close to tears. That handsome hunk just had to get me fired because of a little mistake but I gave him a piece of my craziness. Immediately I got outside the house,I wiped my face with the sleeve of my dress before putting on a fake smile because my little sister Marianna can be very inquisitive and it would be worse if my mom is there with her. Well I shouldn't be too sad cos I still have two other part time jobs:the daycare which I do in the morning and the club where I work as a bartender at night.

I worked into our poor looking apartment. It was looking normal but everywhere was quiet so I guessed my sister was not back from school. She is one of the reasons I want to work harder so she would not end up being like me while the other reason is to get the money to treat my mom because the doctor said her ailment was developing rapidly and I don't want me and my sis to lose the only family we have left.

I walked up the stairs to my mom's room to find her asleep on her old rusty bed. I wished she was never diagnosed of anemia,everything would have been better. I sighed and snuggled very close to her on the bed and started feeling sleepy. When Marianna comes back she'll wake me up.