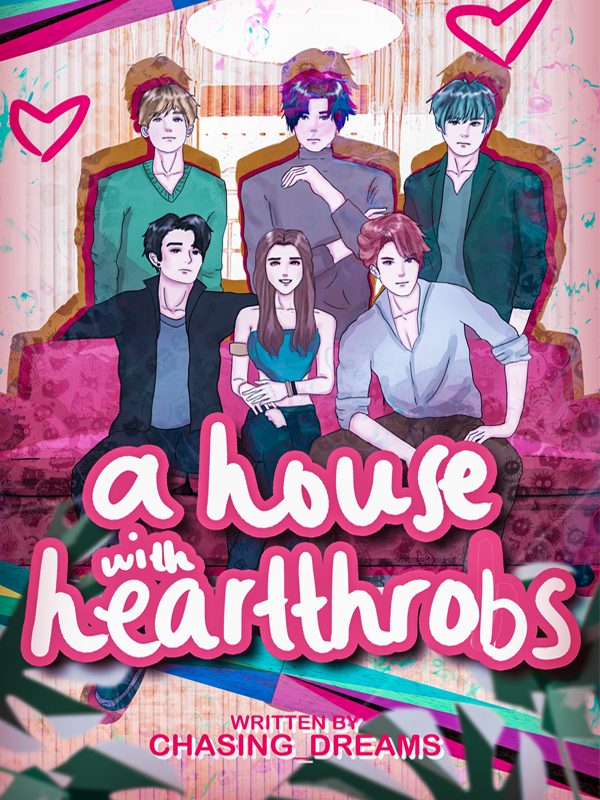 A House With Heartthrobs

When Kaoree became orphaned due to the death of her parents she worked as a maid of five men. He fell in love with one of them but unexpectedly - whether they hide the past and forget it, there are people coming back to mess everything. Will they be able to overcome it because of the love, and friendship that they bond them together? Or, there are things that can't be changed because that's what's destined to happen.

Disclaimer:
This is a work of fiction. Names, characters, businesses, places, events, locales, and incidents are neither the products of the author's imagination or used in a fictitious manner. Any resemblance of actual persons, living or dead, or actual events is purely coincidental.
Do not distribute, publish, transmit, modify, display or create derivative works from or exploit the contents of this story in any way. Please obtain permission
----

I love handsome boys, but I never had a boyfriend. Because of the love my parents gave me, I don't find the need to seek more. I love watching TV dramas. My biggest actor crush is Donny Pangilinan. Who wouldn't be thrilled with that handsome and humble man?

"Kaoree!" Jezrielle calls me. Jez for short. He has been my friend for a long time.

He loves shopping, and the paper bag that he was holding is proof of that.

Every time he earns a salary in his part-time job, he buys some stuff like make-up. Jez really loves make-up! He's like a second version of Paolo Ballesteros.

"Goodness! There are so many men there, Sis!", He pointed to the alley on the corner of the street along the barangay hall. It's vacation time, so we have a basketball league in our town. I'm sure that's why there are many people in the court, to watch the league.

"Crazy! All this time, I thought you have forgotten about me already!" I said as I carried another paper bag he was holding. This bag I am holding is heavy.

He laughed, then adjusted his bangs to block his eyes.

"Just a few trips from your house, and yet you can't visit me!" Jez used to live in the same town as mine with his parents. They moved in when he was in high school. However, we now live in a different town.

Jez is two years older than me. I am currently a fresh Senior High School graduate, while Jez is an incoming third-year college in a university. He has a younger sister named Apple, who's also my friend. But compared to Jez, Apple is not that close to me.

"I'm sorry! I have a lot of part-time jobs these days. I came to my mother's house and then viola! I'm here visiting you! Aren't you glad?" he was kicked out of their house. His father caught him putting make-up on his face and could not accept that his only son was a woman at heart.

He currently lives at his friend's house. There is no rental fee, so it's okay because he can save money. He only pays for other expenses such as water and electricity bills.

"It's good that your parents accept you even if you flirt," he snorted. I laughed. "I'm not a flirt. Okay, maybe a bit flirty, but I have regretted that already!" I did not like anyone with numerous men courting me because Donny Pangilinan's level is what I want! But of course, I have to be an actress first, so maybe he can stay with me.

"You are so full of yourself! You will grow old as a single woman because you rejected those men! If my body was a woman ..." He even raised an eyebrow at me. "I'm going to be pretentious!" I just ignored what he said.

"It's good that you visited me today because it's my father's birthday."

"It's good to know! I didn't have a snack when I got out of the jeep earlier," he said. When we got home, we found a few acquaintances. Some were taking food while others were chatting with my dad, who's holding a chicken. He even sniffed it. It looks like his real son more than me. I once thought of making it tinola, but every time I attempted to slaughter the chicken. Dad always came home, and I almost got caught.

"You seem to have many visitors," said Jez.

"Sweety!", It was Mama putting the plates on the table. She kissed me on both cheeks. "Why did you take so long? I thought you were in Charlotte's house for a while" This holiday, I went to do a part-time job teaching Chander, Ate Charlotte's daughter.

Ate Charlotte is my Mama's batchmate, but they are not close, so she was not invited either.

"Ma! Look who's here! It's Jez!" Mama gasped in surprise.

The two kissed on the cheeks.

"Wow! You look so handsome!" said Mama. But that is true. Compared to his last visit here, he looks different. He seems too stressed in life.

"Yes, Tita! But I'm not handsome. I'm beautiful" we laughed at what it said.

"Is that you, Jezrielle?" Dad is still holding his chicken. Does he have no intention of releasing that?

"No, Tito, I might be a doppelganger" Dad was very scratchy at what he said. "You're a teenager now! He looks more handsome compared before" Dad tapped his shoulder.

"I'm touched! Uncle!", His tongue almost twisted at what he said.

Mama invited us inside. I saw some of my Papa's co-workers at a construction site. Sadly, we have no relatives that are invited. Because they are living in the province. Every vacation, we come to visit them. My grandparents on Mama's side are both dead. Lolito, Papa's father, has also passed away. My only cousin is alone-his name is Lucky, younger than me.

Jez and I scooped up something to eat.

As usual, Shanghai was his first target, while mine is a hotdog stabbed with marshmallows.

"There are no handsome guests here. Most of them are all old people!" Jez drank some water.

"It's more important that you eat," I said to him.

"My stomach is full, but my eyes aren't, so I need to see a handsome guy!" he cried.

After a while of crying and murmuring that he wants to see handsome guys, Mama came to talk with him.

"Of course, joke! That's okay. You're still kids. Just enjoy, but not right away!" I don't know what they are talking about, but Mama sees she belongs in generation Z when she engages in conversation.

"Yes, Tita! Do you know I already sent her too many guys to date? But she doesn't want to," he snorted.

"Who is it? The guys should be handsome and kind!" Mama first inquired into the picture shown by Jez.

"It's mine!" he complains as I took his cellphone.

" My dating life always leads to failure," I said. The recent man he chose to be my date has a girlfriend. It's a good thing the woman didn't slap my face.

"Just choose there!" Jez and Mama giggled as I stared at the picture. They are all handsome, but why does all of them know how to smile except for this one who looks like an anime guy?