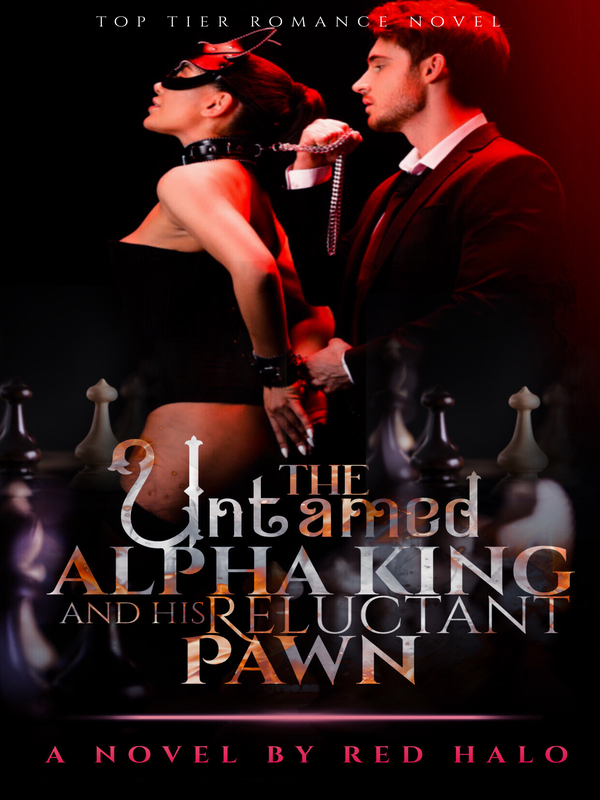 The Untamed Alpha King and His Reluctant Pawn

Vincent's breaths were fast and shallow, hissing in and out through his clenched teeth. He worshiped her body, keeping up the rhythm, increasing the pressure, and using his weight to imprison her in a world of carnal pleasure. With her hair sprawled across the pillows, Isadora warped her legs around Vincent's waist, trapping him with her. The strength of what was building was staggering and it edged dangerously closer with every thrust. The high was torturous. If he stopped, she'd cry. Cry, and beg. And maybe kill… "Vincent!~" Isadora cried out in ecstasy. * * * Warning, this novel is rated 18+ with potential unsettling themes. Lance Martinez Pedro, is a powerful figure dominating the world of Mafia's. A ruthless genius with an unshakeable empire in the dark world of assassinations, illegal dealings, loan sharks and most of all drugs. He was a madman with a history that made him have the peculiar habit of using humans, particularly young children as lab rats to test out his top projects. In one of his causal exploits, Vincent Antonio Fernandez, the son of a powerful neighboring mafia group, had been unfortunate to be at the wrong place, at the wrong time. A boy who found it hard to keep to the simple rules and was kidnapped together with many others, serving as a new batch for Lance to experiment on. Night and day, these children had to suffer the torture of being injected with many substances of unknown origin of components. Discarded as they were brought in, batch after batch, gradually losing their minds and humanity... ...in most cases ultimately into addiction. More than a decade later, Vincent is a free man, managing his own Mafia empire, his Influence heavily pressuring others. Having so much power, he swore to kill Lance destroying everything he ever owned. Someone else robbed him of that opportunity… Things take an ugly turn as he discovers his captor had a daughter, hidden in the country. And oh no was she no innocent catnis…. something more sinister --a broken angel. Manipulative, unrepentant, slippery, strong hearted… She was all he hated. Getting her in his presence, he loathed her in an instant. His hate was fueled by the horrible things she had done without regrets. Her hateful self made him boil hotter than an active volcano. From then on, He swore she would pay for her father's atrocities. All the grudges her father garnered, all the pain he inflicted, the young lives he took…. She shall inherit them all!

I've been good, father, I swear! I hadn't caused any trouble. I've been quiet… like a good girl. I listened to all you said. Why… why do you still do this to me? Had I done anything wrong?

Teachers… classmates… I've been a good student too. Did I miss a step to get punished so harshly?

These thoughts ran endless, the ache down there in my elementary school skirt throbbed without rest as it voiced its own grievances.

I don't think I can take any more punishment there anymore. No more… please...

The sound of footsteps was fast approaching. It couldn't be… they couldn't have found me so soon. Will I get punished for running away? Oh, you stupid Isadora, why did you leave they will definitely punish me more!

I need to go… move right now… away from sight.

"Ahh!" A suppressed wince escaped from my mouth.

I couldn't move, it hurt too much down there. My sitting position must cause this… they will catch up… I'd get beaten again… no… no…

A grumpy voice reached my ears… a voice I would never forget.

I remained still unable to look up. They caught up?

"How did you find my hideout?" The boy, I assume, huffed.

No one's hitting me yet? Why… oh no do they intend to do it later… has my punishments gotten greater… has...

"Hnngh!" I screamed in pain as my head was forced up from the comfort of my knees, the breeze kissed my face.

"Are you deaf or something? When I'm talking to you, you speak!"

It wasn't my classmate, or teachers or father… it was a senior. Have I offended a senior? It seems that I'm a bully magnet.

"Shit! Don't get snot over me." He let go immediately looking very repulsed.

Panic rose to the boy's face, "Calm down! Calm down!! Stop being so loud! Do you want to reveal my hiding spot??? It's already hard enough to escape from training." he spoke through gritted teeth.

Calm down? He… he wasn't going to hit me? I calmed immediately with a few hitched breaths.

The boy stayed in a squat not looking too pleased. He kept an eye on me and the other at the exit, cautious of something. I soon realized… he was escaping from something… just like me.

My eyes cleared a little and I recognised him immediately. He was Vincent… the school's naughtiest kid. He is always used as an epitome of a bad example. The worst of the worse.

I shuddered as a sharp tone pierced my ear drums.

"Vincent! Come out now. There is no time to play such games. We have lots of work to do!" The commanding tone insisted.

"Ha… haha haha. What a speech! Do I look like a fool or something." Vincent mouthed.

He isn't being a good boy.. but he can afford to laugh? How strange.

"Why are you staring at me like that, weirdo?" He taunted with a smirk.

Overwhelmed, I ended up blurting out.

"You… Why are you so happy? It doesn't make sense. You didn't listen to anyone and you are too glad. How… how do you do that?"

I clasped my hands over my mouth. I spoke without permission… trouble… trouble

He stopped smiling and focused on me. His gaze on mine.

Vincent steeped into his thoughts. Seeing how she is shaking like a leaf she must have had an episode again… recently to be precise. This little girl is quite known for her mysterious behavior. It's rumored that she is mad and overly timid. Not like I indulge myself in filthy rumors anyway… witnessing this firsthand, It seems to be true. What happened this time?

This position lasted for a moment before he spoke.

"You… I know you. The big crybaby from class X. Should have known."

"That..that doesn't answer my question." I squeaked, "How are you so happy? You are not a good person? How…"

He had some good advice for her. She is too irritating!

"Who are you or anyone to define what's good and evil!" He yelled impatiently, "Listen carefully and don't talk to me after I say this. You sound so irritating."

Hah~ "You idiot. I can tell from a glance what the kind of virtuous life you adopt. Not working so well is it?"

I shivered eye-wide. What's wrong with my behavior? Isn't it perfect… Did I sin? Did I do any wrong? Is he mad

"It's me first…. a family motto. Be selfish, you should always come first in everything and situation otherwise risk forfeiting you own part of the fun." His voice got considerably lowerwith much more emotion in his eyes,"At least that is how I was taught."

He suddenly grinned, makingme question if the sentence he made previously was her imagination,"It's you or them… always choose you. You must understand that… ight...you… just.. Don't … faint... on… me! "

I barely heard his next words as in a moment my body used the ground for support as I felt consciousness slip away. However there was one thing I grasped at that moment.. be selfish, always come first.

The opposite of all that I know….the careless words of a 7th grader.

Little did he know it became my lifelong motto.

+++
Screams. The irritating yelps of pain filled the surrounding area of the torture chamber room. Blood spluttered in various directions.

These filthy jobs are usually executed by my underlings but this was special. I was sending off a member of my family to the cold embrace of death.

The anger that took over my body was indescribable. He betrayed me. Me. The. King. The person who owned his life.

Nobody betrayed me and got away with it. I trusted all my men. They were my family, but when one of my own betrayed me, they paid the ultimate price. Death.

The man tied to the iron chair choked on his own blood as his body shook in fear. He refused to answer.

"Why did you betray me… the famiglia?!" I roared like a wounded lion and forced out the pliers clamped to his teeth.

"Gah...Arrrh… Ahhhh!!!!" He screamed in pain but the complacent smirk on his face did not wipe off. Neither did the utter terror which possessed his body diminish as he realised his bleak fate.

"Wu-why I spied?… haha… ha...You…" His words slurred , struggling to talk,"You aren't Worthy to be Don, Viktor is more formida…."

Three hot bullets struck through his head blowing his brains out. The head stood still for a few seconds before drooping down on its chin, fresh blood dripping on the ground.

"Clean this up." I commanded leaving the scene.

As I stepped into the dark hallway, the air around was stale and unpleasant as always. Send offs always ended up like this, I have lost a reliable ally this time. Purging the Famiglia is a difficult but necessary thing to do. All who betray me go through the same fate.

But how much more would Viktor sacrifice to infiltrate my domain?

I see my second in command, Mateo, standing in front of my chamber's doors. He knows not to go in when I'm not around.

"I'm back from the assignment, boss." Mateo saluted, dropping his gaze low in my presence.

I got into the room and he followed closely. I got behind my desk and sat; ready to receive his reports.

"Look at me and speak, Mateo!" I command him to confirm my suspicions.

His teeth grinded against each other and his hands were clenched too tightly. His always neural expression had disappeared, he bore bad news.

"I investigated TS Father's case in relation to his men and domains; and found high level underground information about him…"

My hands squeezed until a fountain pen broke it in two. I hated that name!

"He has a daughter."

Blood pulsed rapidly in my ears.

Daughter? The old bastard has a daughter!.

"This is all I've gathered about her." Mateo handed over a detailed fine.

Guess the apple doesn't fall too far from the tree.

Oh! Lance… everything you have done is flawless. How did you let this one loose? This daughter… this abomination!

Oh Mateo! Now I understand what it took to carry this news. It must have taken a lot of him to keep his composure in front of me.

I looked at the dark ink in my hands; all over the place… not like I'm faring well either.

“Find her and get her here! No matter what it takes!”

He cut her off with the coldest gaze, in his scrutiny she didn't dare move an inch. It was as though all of her muscles suddenly failed and her body dared not rebel against him.

Before she knew it, he had clasped a collar choker tightly around her neck. His eyes pierced through hers as he spoke in a deep baritone voice.

You are mine now. Don't think of escaping.

Isadora froze, something about this man's gaze shook her to the core still she couldn't tear away from it, she didn't dare to.

"Lock her up." He gave his last commands and turned to leave.