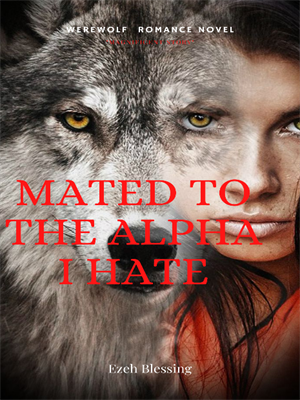 Mated to the Alpha I Hate

"You are mine alone and no one else would have you." Jayden the school's well known bully and an unrepentant playboy shrieked at her and she frowned anger seething through her. "Point of correction, I would never be yours so get that into your thick stupid skull." "Get away from me for I have a have a boyfriend who awaits me." Rhoda yelled at him pushing him off and walking away from his sight. Jayden was the school's head bully. Once you refused to sleep with him, he would bully you till you succumbed. In Rhoda's case, she was strong headed and refused to be affected by his bullies. She ignored him and bare whatever thing he does to her as long as he never saw her panties. She was finally happy she when they entered their final class as would soon be freed from his bully but it looked like the moon goddess hated her and would never let her be happy. Rhoda's world crumbled the day she finally turned 18 and discovered that her boyfriend Luca who had been with her ever since she was 8 wasn't his mate, rather it was Jayden whom she dreaded. Jayden was grateful as the strong headed girl would finally melt in his hands. But was Luca who rejected his mate a year ago for his girlfriend ever going to allow Jayden have what was his? Would Rhoda ever accept Jayden as her mate? Would Jayden be letting her go just because they might refuse?

I walked into the School premises holding my back pack and dialing a number on my phone.

"Hello Luca where are you" I asked smiling and I also felt him smiled at the other end.

"I'm already in class, I'm sorry I didn't come to pick you up, I had to leave the house very early he said and I nodded.

"Hope all was well as to your leaving the house early" I asked.

"Yeah, mother wanted me to run some errand at the silver pack"

"Alright" I would see you during the recession. "Stay out of trouble babe" he said and ended the call.

I giggled, smiling. I love it when he calls me pet names.

He hadly does that though but Reign and I loved him dearly.

A little introduction about myself*****

My name is Rhoda and I'm from the Moon stone pack.

My father is the Beta and Reign is my beautiful wolf.

I have a very sweet and caring boyfriend and we have been together for 9years. His sweet name is Luca.

Luca is our pack's Alpha son, we became friends when his father became the Alpha and mine the Beta.

Our friendship blossomed into a beautiful relationship as we aged and now, I can't wait to turn 18 and officially be marked by him.

Don't ask me how I knew he would become my mate. We have been together for a long time and even the moon goddess must be aware of our love.

Enough about my personal life, lets get to my school life.

Luca and I attends Westbridge High school which is situated at the center of Darkmoon pack.

I am in Class A while Luca is in class C.

Two blocks away from mine that was why you heard me say "I would meet him during the recession".

We both are finalists.

I have a best friend Rose who I'm sure would be waiting for me in front of the class with arms spread out.

I love my school and everything in it except for one person.

His name is...."Hey watch it, I was suddenly pushed down by a force.

I stumbled forward, my phone falling out of my hands to the floor and a leg stepped on it preventing me from picking it up.

Reign growled as she realized who it was and I sighed.

Talk of the devil and he would appear.

Looking up and facing the only torn on my flesh.

"What do you want now" I said glaring at him and he laughed.

"You ofcourse, surrender yourself to my precious d'ck" he said grinning and I hissed.

"That would only happen in your wildest imagination" I said and Reign growled "stupid pervert" she muttered and I laughed.

"Give me back my phone I said as he already picked it up and pocketed it" that would also be happening in your wildest imagination" he said and smirked.

Stupid!!!!!. "Give me my phone Jayden I said getting annoyed but he ignored me and started walking out.

Eiiishhh!!! Devil I called and ran after him, we were almost at the front of our class when he stopped.

"If you really want the phone, you know where to get it, at the restroom for a quickie price" he said and I rolled my eyes.

"In your dreams Fool" I said and he turned and ran out in a flash.

See what I was trying to explain to you guys. This boy is the only tormentor I had in this school.

Now I would have to beg him before he would release my phone.

"Common cheer up and let's get to class, it's a new week and we haven't seen Rose for some days now" Reign whinned and I scoffed.

"Just tell me you want to see Lana, stop using Rose to lure me in" I said already knowing her aim and she whimpered.

"Ok let go see Rose" I said and she jumped happily. Well she only wanted to see Rose because of Lana; Rose's wolf.

Reign and Lana are best of friends just like Rose and I.

I walked towards the class and just like I told you guys, Rose stood in front of the door her hands spread out wide.

I walked into them ofcourse and Reign jumped inside me on feeling Lana and quickly blocked me off her thoughts.

"Gossips!!! who knows what they are up to" I said and Rose laughed.

"Leave the wolves alone let them catch fun while we do ours" she said dragging me to our seat.

"Tell me how your weekend went, I want to know about it all" she rasped. Well I knew she was talking about my weekend with Luca.

I grinned on remembering my Saturday outing with Luca.

"Awww!!!! You are tomatoe red" she teased and I blushed more.

"Quick tell me all of it and don't miss a single detail" she said and I smiled.

"Well he picked me up by 5 and we went ice skating; from there we went to the beach, we got cotton candy and finally he took me to the cinema" I said concluding my gist but Rose being Rose, she wanted to hear naughty parts.

Ok? So have you guys finally done it she said smiling and I hit her arm lightly.

"Get away from me please. You know I haven't turned 18 and doing it with him when I wasn't sure if he would be my mate is a sin" I said and she scoffed.

I did it with Max when hadn't found each other and he turned out to be my mate so we officially marked each other.

Luca would definitely be your mate and I can't wait for next two month when I would be getting the whole full gist" she grinned and I laughed.

"Definitely, no single details left out" I said raising my hands to indicate honesty.

"By the way, what happened to your phone, I called it few minutes ago but you weren't picking". She said and I sighed remembering Jayden and my phone.

"Jayden took it" I said and she raised her brows confused. "How, where and why? She asked and I laughed.

"Easy ma'am detective with multiple questions" I said and explained everything that happened outside with Jayden to her and when I was done, she spranged up from her seat.

"That brat, I would deal with him she shrieked matching forward to the back roll where Jayden was sitting.

I didn't know he was already in the class.

I followed her and she got to his seat and she hit her hand on Jayden's table drawing his attention.

He raised his head and took his hand to his chin looking at me "you brought your little police for me" he said and laughed out loud attracting the attention of half of the students.

He hit his hands on his table as the rest looked up making the whole eyes stare at us.

"Look what I found in Rhoda's phone" he said raising the phone up, and I knew I was done for, as he was going to read out my messages with Luca.

"Baby would you still come pick me up for the weekend outing" he read and the whole class shouted.

"I am all alone at home my love, I missed you so much, I wish you were here with me by Luca" he read and the noise in the class increased.

"I really wish for two month to come so I would claim you and mark you to my heartfelt he read and everyone erupted. Laughter filled everywhere.

Some glared at me where some were looking at me as though I had two heads.

"Should I read this one" he asked and knowing what he was about to say, I shook my head hastily. "Please don't"...

"Seeing his gazed was fixed on me as he smirked, Rose used the opportunity to snatch the phone from him and ran out.