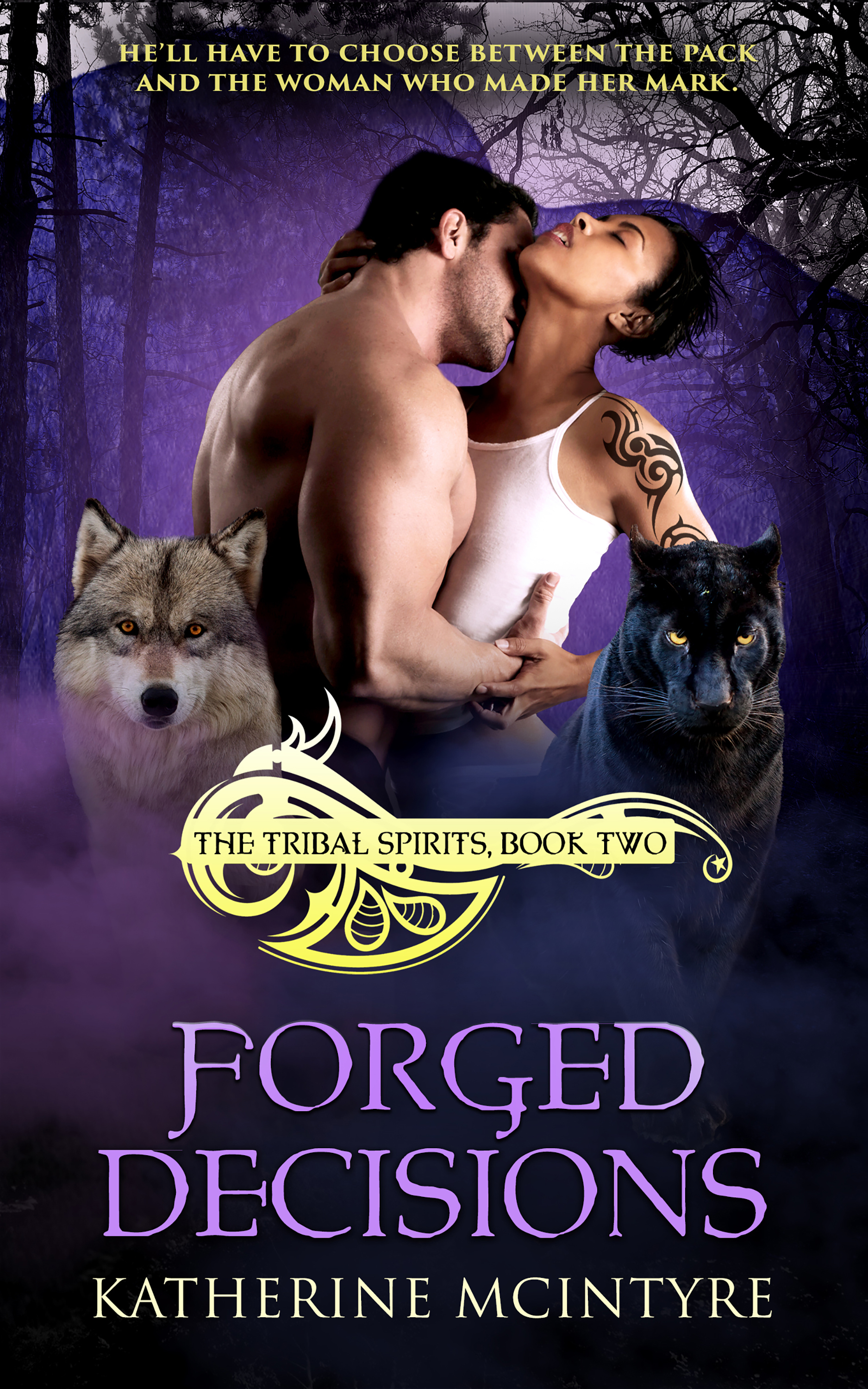 When Finn falls for Navi, a member of the East Coast Tribe, he’ll have to choose between the pack and family who saved him and the unforgettable woman who’s made her mark. Ever since Sierra and Dax mated, forming their alliance, Finn has been restless in his position as beta for the Red Rock pack. So, when Navi, the gorgeous, lethal member of the East Coast Tribe, conscripts him to help break up the Landsliders’ drug-running ring, he leaps on the opportunity. As they work together, their attraction deepens to more than comrades and far more than a one-night stand. Except Navi isn’t sticking around town forever and Finn has his own responsibilities tethering him to the Red Rock pack. When the trail to the drug ring leads them to the man who murdered Finn’s parents, Finn’s forced to confront the fears he’s buried and, in the process, the connection between him and Navi grows scorching and unforgettable. However, with an underground meth lab to bust and his parents’ murderer to take down, Finn throws his heart and soul into the fight, because he knows, even if he survives this, he’ll be forever marked by the goodbyes to follow.

Finn had been avoiding Beaver Tavern all week.

He sat in his Challenger, tapping ash out of the window as he stared down Raven’s car in the parking lot. Sneaking around, hiding from her at every chance—he was being pure chickenshit right now. The Tavern had already flicked on the open sign for the day and ever since the night of Dax’s victory when he’d spent the night with Navi, he hadn’t wanted to face Raven. Hadn’t wanted to untangle the complicated whatever they’d been dancing around all these years. His wolf lunged inside him, demanding straightforwardness he couldn’t muster right now.

He let out a stream of smoke, glancing at the time on his car’s interface. With his next class in a half-hour, he didn’t have long enough to dive into a serious conversation with her. His throat tightened when he wheeled the car out of the lot and his tires crunched over gravel. Even as he made the justifications in his mind, he knew he hid behind excuse after excuse.

A better man would’ve never strung Raven along this long, knowing at the end of the day they would never have a future together.

Finn wasn’t a better man—hell, he wasn’t even a good man most days. The previous alpha had groomed Sierra to take the reins and not him for a reason, despite their matched skills and strength. The current alpha of the Red Rock pack maintained the unshakable moral code his people needed to hold their territory and form a united front against any challengers that might come their way. Finn threw out a whole lot of swagger, but time and time again, he crumbled.

The hickory and oak trees of Rickett’s Glen rolled by, the dense forests he’d grown up running through. Those trails beckoned to his wolf on a regular basis since he skated a little more on the wild than the others, a little too attuned to the demands of his other side. He drove this route to work daily on the way to his studio. Thank everything holy he’d carved a successful niche teaching kickboxing and MMA out here, because if he hadn’t found some outlet for his aggression, he’d be flipping tables and slinging punches every night.

After the way he’d wussed out of the discussion with Raven yet again, he needed to burn some of the nerves making him buzz. Which made the upcoming class he was teaching perfect timing.

He pulled up in front of his studio, Kelly’s Gym, and parked along the patch of beaten earth that constituted the parking lot. Finn approached the shoebox of a place he couldn’t have been prouder of, the plaster siding glowing white and the near-flat black roof within jumping distance. His place might not compare to the massive gyms in cities like Philly, but he’d thrown a lot of work over the years into turning what used to be a couple of sessions a week into a thriving business.

Finn strode to the back and set the big fans on, his sole means to combat the sticky heat rolling through this sector during late summer. Once strong breezes gusted through the room, he began his own set of warm-ups, his wolf snapping at the reins a little more than normal. Not like he thought he’d be less agitated in charge—Sierra made an amazing alpha—but ever since he’d become beta of the pack, a restlessness had kept him on edge.

Even with their old alpha, his wolf had lunged forward to strike at any chance, a rebellious side of him that clashed with the community he needed to survive. Wolves were pack creatures and he’d witnessed life outside their circle early on when his shithead folks decided to ditch. The time away had been a nightmare.

Drops of sweat beaded Finn’s brow as he worked his reps with the punching bag, burning some of the aggression heating his chest. One-two, one-two, one-two.

A slight creak from the opposite side of the room startled the hell out of him. Finn whipped around, droplets flying from his arms when he turned toward the door he’d never heard open.

“Don’t stop for my sake—I was enjoying the show,” Navi drawled, leaning against one of the pillars in the center of the room. The damn panther could sneak around better than most, even with the raw, lethal energy radiating from her. Like Finn needed more of a knockout punch—the sight of her shoved the air from him. Navi’s hooded gaze, those deep hazel eyes screamed sex, and the casual smirk on her full lips was a private one she’d only shared since the other night.

The tank top and running shorts she wore left her rich brown skin on full display, highlighting the sort of hips he wouldn’t have expected on a pipsqueak like her. Not that he’d ever call her that—he might be a dumbass sometimes, but he valued his life. She was one of the Tribe, the shifters imbued with the great spirits of the animals they transformed into and the governing force of their kind.

When he’d started flirting with the scary-as-fuck Tribe member during Dax’s trials, he knew he was playing with fire, but he expected her to shut him down. Never in a thousand years had he anticipated their unforgettable night.

Man and wolf alike couldn’t help the way his cock throbbed at the mere sight of her. When she moved, he noticed, and when she entered a room, he felt her presence as loudly as if she screamed in his ear.

“Got some aggression to burn before class, soldier?” she asked, approaching with a balanced, feline grace to her movements. His heartbeat raced. He wanted to slam her against the mats to claim every inch of her luscious body, but she patted the side of the punching bag. “We’ve tried that route,” she purred, her eyes glinting with amusement. “Now let’s see how you fight.”

Inches separated them and Finn stepped closer, moving into her space. “How’s that a fair fight, pussycat? You’ve got all those spirit-gifted tricks to whip out.”

Navi didn’t back down an inch, her calm smile twisting into a smirk. “Like I need my abilities to bring you to your knees. Quit making excuses, Finn Kelly, and spar with me.”

His heart thumped in his ears, the blood pumping through his veins in an intoxicating way. A slow grin rolled onto his face as he stepped back a pace and sank into a crouch. “I suppose we’ve got enough time for one round. Don’t go crying to your buddies that a Red Rock kicked your ass.”

Her mouth quirked with her grin, but Navi emanated lethal calm, her eyes flashing the silver of her panther even though she remained in human form. She was out of his league in every way, her abilities and the magic at her command the stuff of whispered legends, and yet Finn couldn’t help trying to catch the tornado by the tail. As she circled around him, the movement slow and seductive, her power crashed down like a tidal wave over the room until Finn near drowned in it.

Too bad he was a stubborn fucker.