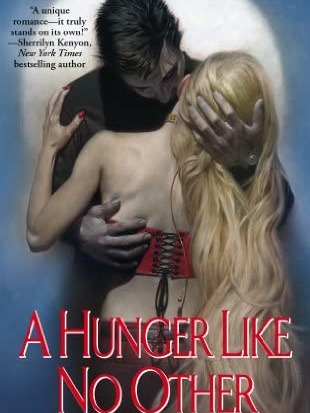 A fierce werewolf and a bewitching vampire become unlikely soulmates whose passion swill test the boundaries of life and death. After enduring years of torture from the vampire Horde, Lachlian MacRieve, leader of the Lykae clan, is enraged to find the predestined mate he's waited millennia for is a vampire, or partly one. Emmaline Troy is a small ethereal half valkyrie/ half vampire, who somehow begins to soothe the fury burning within him. Emma's parents lived in Paris before she was born. Emma's mother was a valkyrie called Helen last name Troy. She knows nothing about her father apart from the fact that he was a vampire. Sheltered Emmaline sets out to uncover the truth about her deceased parents until a powerful Lykae claims her as his mate and forces her back to his ancestral Scottish castle. There her fear of the Lykae and their notorious dark desires ebbs as he begins a slow wicked seduction to sate her won dark cravings . Yet when the ancient evil from her past resurfaces, will their desire deepen into love that can bring a proud warrior to his knees and turn a gentle beauty into the fighter she was born to be?

Sometimes the fire that licks the skin from his bones dies down.

It is his fire. In a recess of his mind still capable of rational thought, he believes this. His fire because he’s fed it for centuries with his destroyed body and decaying mind.

Long ago—and who knows how much time has toiled past—the Vampire Horde trapped him in these catacombs deep beneath Paris. He stands chained against a rock, pinned at two places on each limb and once around his neck. Before him—an opening into hell that spews fire.

Here he waits and suffers, offered to a column of fire that may weaken but is never-ending—never-ending, just like his life. His existence is to burn to death repeatedly, only to have his dogged immortality revive him again.

Detailed fantasies of retribution have gotten him this far; nursing the rage in his heart is all he has.

Over the centuries, he has sometimes heard uncanny new things in the streets above, occasionally smelled Paris changing seasons. But now he has scented her, his mate, the one woman made for him alone.

The one woman he’d searched for without cease for a thousand years—up until the day of his capture.

The flames have ebbed. At this moment, she lingers somewhere above. It is enough. One arm strains against its bonds until the thick metal cuts into his skin. Blood drips, then pours. Every muscle in his weakened body works in concert, striving to do what he’s never been able to for an eternity before. For her, he can do this. He must…. His yell turns to a choking cough as he rips two bonds free.

He doesn’t have time to disbelieve what he’s accomplished. She is so close, he can almost feel her. Need her. Another arm wrenches free.

With both hands he clenches the metal biting into his neck, vaguely remembering the day the thick, long pin was hammered into place. He knows its two ends are embedded at least three feet down. His strength is waning, but nothing will stop him when she’s so close. In a rush of rock and dust, the metal comes loose, the recoil making him fling it across the cavernous space.

He yanks at the bond wrapped tight around his thigh. He wrests it and the one at his ankle free, then begins on the last two holding his other leg. Already envisioning his escape, not even glancing down, he pulls. Nothing. Brows drawn in confusion, he tries again. Straining, groaning with desperation. Nothing.

Her scent is fading—there is no time. He pitilessly regards his trapped leg. Imagining how he can bury himself in her and forget the pain, he reaches above his knee with shaking hands. Yearning for that oblivion within her, he attempts to crack the bone. His weakness ensures that this takes half a dozen tries.

His claws slice his skin and muscle, but the nerve running the length of his femur is taut as a piano wire. When he even nears it, unimaginable pain stabs up its length and explodes in his upper body, making his vision go black.

Too weak. Bleeding too freely. The fire will build again soon. The vampires return periodically. Will he lose her just when he’s found her?

“Never,” he grates. He surrenders himself to the beast inside him, the beast that will take its freedom with its teeth, drink water from the gutters, and scavenge refuse to survive. He sees the frenzied amputation as though watching a misery from a distance.

Crawling from his torture, abandoning his leg, he pulls himself through the shadows of the dank catacombs until he spies a passageway. Ever watchful for his enemies, he creeps through the bones littering the floor to reach it. He has no idea how far it is to escape, but he finds his way—and the strength—by following her scent. He regrets the pain he will give her. She will be so connected to him, she’ll feel his suffering and horror as her own.

It can’t be helped. He is escaping. Doing his part. Can she save him from his memories when his skin still burns?

He finally inches his way to the surface, then into a darkened alley. But her scent has faltered.

Fate has given her to him when he needs her most, and God help him—and this city—if he can’t find her. His brutality had been legendary, and he will unleash it without measure for her.

He fights to sit up against a wall. Clawing tracks into the brick street, he struggles to calm his ragged breaths so he can scent her once more.

Need her. Bury myself in her. Waited so long….

Her scent is gone.

His eyes go wet and he shudders violently at the loss. An anguished roar makes the city tremble.

In all of us, even in good men, there is a lawless

wild-beast nature, which peers out in sleep.