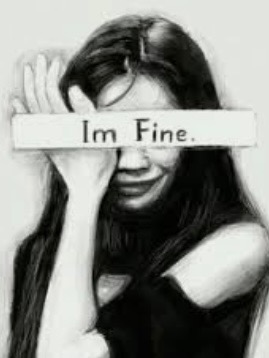 My parents broke me

There is this girl named Sarah. She has to deal with a lot in her life. She gets beaten and broken down. Everyone thinks that she is that happy-go sunshine but what happens behind closed doors stays there. She is 16 now and she found something out about herself and she has no idea what to do. Her family is rich so everyone thinks that they are this perfect happy little family but in reality are they? Things are not as they seem in the house. When she was just 4 years old her parents ended up getting divorced. I hope you enjoy the story!

Today I go back to school. I am now a freshman at Coosa high school. I am sitting at my vanity, doing my makeup, and getting on my school uniform. The uniform was ugly; it was a skirt past my knees and a hideous sweater. They say it will help everyone not get “distracted” from their schoolwork. Mom yells and says, “you're going to be late for school. You better hurry up. I'm coming, mom; I run into the living room and get my bag and get out to the bus. As I get on the bus, I see my best friend, Amy

When we got to the school, it was about 7:45, so we went to the cafeteria to get breakfast. As we sat down, this girl named Maddie walked up to us.

“Losers get a life,” she said as she passed by

We ignore her because she has bullied us well, mostly because I guess she feels intimidated by me.

Later on, when get got out of school, I got on the bus, and when I arrived home, my mother was there. I was not the happiest person about that.

I'm sorry I forgot to introduce myself. My name is Sarah. I am 16 years old, and I am adopted. I live in Rome, Georgia. I have seven other siblings. I am the second oldest on my mother's side, and the other I am the third oldest. My sisters are named Darla, Ashley, and Samantha. My sister named, Darla, is the same age as me. She is just three months older Then I am; Ashley is 10. She is the third sister after me; of course, she is shy and withheld. Lastly, Samantha is the baby. She gets whatever she wants, of course; she has them wrapped around her finger.

I was the Disappointment of the family. They adopted me. I never asked for them too. I was a baby. I was taken away from my mother, I ended up in foster Care. I was there until I was three years old. I remember this woman coming to see me, and I would go to her house and stay the night with her. She had a daughter the Same age as me. Can you guess who that was? You guessed it, my mother. Her name is melody, and she is a total bitch. My father doesn’t even get me started on him. He Scares me too much. Allow me to begin with my father. His name is Chris.

Chris Is a jerk, and I cannot stand him. He thinks the world revolves around him and that no one else matters but his new family. They intensely disliked me, and I had no idea why it started. When I was about eight years old, he started hitting me, and we would do stuff to me that I was not ready to even think about, you know. It was traumatizing. I still get nightmares about what happened to me.

My mother, melody, isn't the best either. She is also abusive. Not physically but mentally and verbally. She calls me fat all of the time, and I am not that big. I'm a decent size. I have meat on my bones, but who doesn't love that? She has succeeded in breaking me down and making me hate myself.

But enough about that for now. I am standing in front of my mirror, looking at myself. I have long brown hair, which is straight, and I would say it looks pretty. I have small pink lips, but they look good. I have a pretty blue dress on, and it has a lovely pattern on it. I have my black heels on, I think I look damn good but also not the best looking.

Soon it was time for dinner. I went into the kitchen and got my plate. I went to sit down and eat, and then everyone else came in and started eating. It was a comfortable silence until it wasn't. Melody began asking questions like “how was school” or “have you talked to your father.” She knows what happened to me, but yet she doesn't care. As I finish eating, I get up and take my plate, and put it in the dishwasher. Then I went straight to my room to do homework and sleep.

AHHHHHHH GET OFF OF ME

YOU WILL NEVER ESCAPE ME

I woke up screaming, and tears were rolling down my face. I always have nightmares is nothing new; just what happened to me when I was little still haunted me.