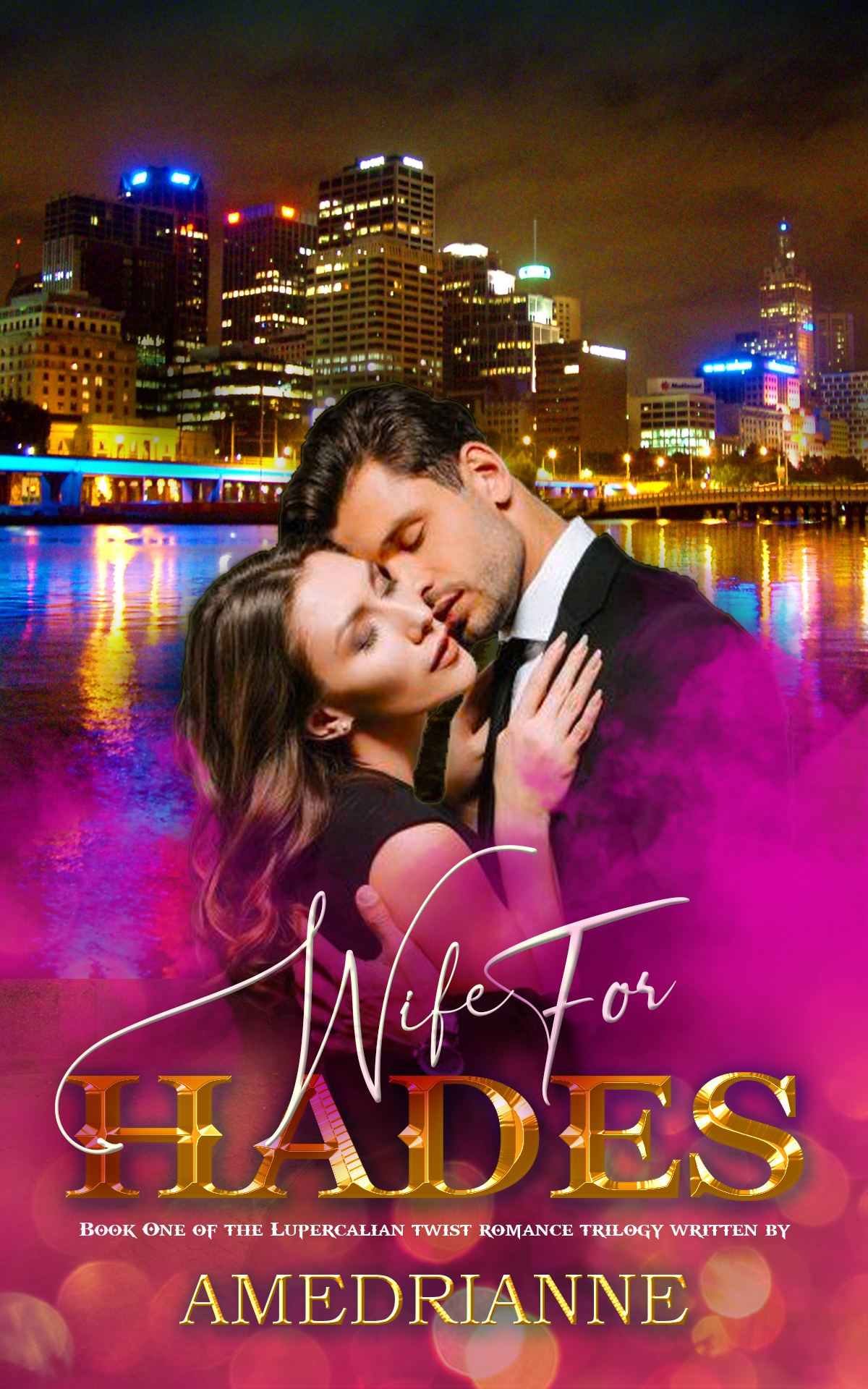 When the three famous celestial brothers—Hades, Zeus, and Poseidon—have their divine attributes ripped away, there is almost nothing left with them as they become mere humans. Not until a mortal woman, Rheis, adopts them as her sons. Their lives abruptly change from having no omnipotent powers or worshippers to becoming heirs to billions upon billions of properties. And while on a family trip in Italy, the brothers receive an invitation to an exclusive elite party called the Lupercalian Twist, which takes place every fifteen years on the fifteenth of February. The main highlight of the event involves the men being randomly paired with a woman they have never met before. Each bachelor is being demanded to win the woman's heart before the event ends, otherwise, they risk losing all of their possessions to the institution. As the event requires Hades the need for a wife, no one appears to be eligible for him except for a woman he met by chance before and that is Stephenie. But how far Hades can go risking everything he has to win Stephenie's heart when her ex-fiancé unexpectedly reappears to steal his wife?

It was a cold yet boisterous evening, crowded with a slew of gentlemen from various and sundry elite families. With each of their faces hidden under a dazzling mask, it was difficult to tell the difference between an oligarch and a tycoon. But one thing is certain—each mask concealed a bachelor who was awaiting to be selected for tonight's much anticipated event.

“We've come to see the highlight of tonight's event,” the presenter exclaimed, too eagerly. With the microphone in his hand. He spread his arms wide enough to welcome everyone as his voice boomed in the Grand Hotel Plaza's vast grand ballroom.

The ballroom, which was furnished with magnificent lounges alternatively aligned on each corner, was already taken by random gentlemen dressed predominantly in luxury suits and tuxedos, while cocktail tables were spread across the hall just enough to accommodate guests limited to a certain number of each group.

Above them, however, dangled an exquisite chandelier, the lights of which reflected against the murals painted on the ceiling, which also added some vibrancy to the red carpets and burgundy drapes, while still, of course, would leave anyone an impression of an ancient touch of the Roman empire from ages before.

The presenter continued, while the giant led screen behind him flashed a large banner with the word: LUPERCALIAN TWIST.

It was at this point that the Olympia Brothers, Zeus Dreon, Poseidon Luies, and the eldest of the three, Hades Aldione, arrived. Even with their masks on, their unrivaled stature matched no one from the crowd.

Others who had been anticipating their entrance paused to see the trio enter till they were able to sit in a lounge that had been arranged for them.

“Mother must have tricked us when she said there would be a lot of beautiful ladies here,” Zeus commented after his eyes roamed around seeking women.

“I see nothing except for mere bulls around here. It’s rather boring.” Poseidon added.

Hades sighed. Except for women, he hasn't heard anything else from his brothers since they arrived at the venue. He frowned at them and told them to act properly, but they only laughed at him.

“Come on, Hades. Mother is nowhere to be seen. You can get rid of that damn perfect son image you've been wearing for a while now,” Poseidon said. He elbowed Hades, who was still apathetic at the moment.

“I know you're bored as well. Your actions do not lie. We aren't brothers for nothing, Hades,” Zeus said. He spread his arms on the back rest of the lounge. Zeus had felt his limbs constricted from the trip merely to attend the event, as he cracked a muscle or two.

In astonishment, Hades shook his head. He couldn't agree with his brothers more. The event is truly tedious, but because their mother insisted on their participation, they all still must go and witness it for themselves.

“What was so exceptional about this occasion that there were no women to be found?” Zeus pondered as his eyes wandered around hunting for any sight of a woman with whom he could flirt.

“You didn't come along to just look for women to either bang for the evening, did you?” Zeus was approached by Hades. But Zeus held his stomach before he burst into a hysterical augh because of Hades' abrupt assertion.

“Brother, you wound me,” he said. Zeus pressed his palm against his chest to show Hades how sardonically offended he was. “I don't prowl women. They beg for me,” he continued pompously. He then stretched his long legs over the coffee table, and Zeus' natural blonde locks were swayed by his free hand away from his eyes.

Hades, who had grown agitated, chastised Zeus once more for his mischievous notions. He can't believe he was forced to babysit his dimwit brothers tonight. While the three were engrossed in their discussions, another man approached the trio. The man seemed to be one of the organizers. He stood in front of them and handed over three keycards. Each card had an embossed set of digits, which caused the three brothers to look at him in wonder.

“What is this for?” Hades inquired.

“These are the entries for the Lupercalian Twist, which will begin shortly,” the man explained.

The man turned his attention to Poseidon and spoke to him. “Yes, it's an event that occurs every fifteen years on the fifteenth of February. Where all eligible men are randomly paired with a single maiden for a matching event.”

“And then what?” Zeus snuck in after he heard about the women.

“Whoever wins the other's heart will receive a large sum of money from the organization. And if you lose, you must pay us the amount specified by the institution.”

“That's a nice catch,” Zeus said, then he flashed a grin. Hades can't help but notice a stray thought in the back of his mind.

Hades was supposed to approach Zeus once more, but Poseidon interrupted to speak something.

“Pathetic,” Poseidon replied instead. He glared quickly at his brother, Zeus, before he returned the cold stare back at the staff. Hades nearly believed Poseidon was thinking the same thing he was when he warned Zeus about his comments, but that was completely changed when Poseidon added, “Why would we waste our time for such games?”

“Because your mother, Rheis Olympia, signed an agreement to register the three of you,” the man said expressively as he fixed his tie. He shot them a pleased grin in assurance that all his words were genuine and without a hint of reluctance. It was as though he had prepared himself properly for the questions that the three brothers would throw at him.

Hades, who had been trying hard not to be affected by the news, eventually flinched. He wondered why their mother would agree to such a ridiculous event.

“An agreement?” He queried. Hades rose from his seat to meet the man's height. He was a few inches taller than the man, yet this didn't make the man falter even a bit.

“Would you like to see what's in the contract, Mr. Hades Aldione?” The man inquired.

Certainly, he desired to prove the veracity of his comments. But, for some reason, it was Hades who grew too hesitant to prove himself wrong and that the man might really be telling them the truth.

“Can you show me the contract?” Hades asks firmly.

“Just a second,” the man excused himself for a brief moment. He then returned shortly with a brown envelope. It contained a sheet of paper with a contract between Lupercalian Twist's management and Rheis Olympia.

They never approved of the agreement. It was a shocking news for the brothers because they had never imagined their mother would actually put their lives on trial, putting their lifestyles in jeopardy whether they won or lost the Lupercalian Twist event.