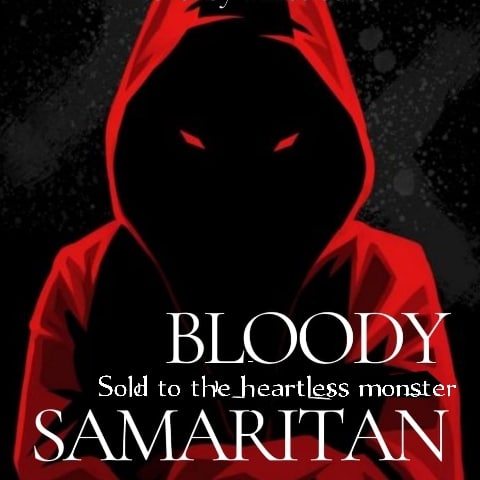 TITLE:- BLOODY SAMARITAN 😠 SUBTITLE:- SOLD TO THE HEARTLESS MONSTER. GENRE:- ROMANCE TAG:- BETRAYAL, RUTHLESS BILLIONAIRE, DEATH AND SEX. LOCATION:- LAS VEGAS, PARIS AND MIAMI. WRITTEN BY AISHAT KEMISOLA (THREE STARS) MALE LEAD NATHAN O'BRIEN FEMALE LEAD ADELE CLERK. Nathan O'Brien... He's Super Handsome, He's rich, He's heartless, He is nice, He has chains of companies and hotels. He is the richest man in Las Vegas. He is Cold, Heartless, ruthless and Arrongant and he doesn't respect or fear anyone, killing is his hubby. He's just 27 I forget to Add that he is a playboy, But he has choice, he only go for rich celebrities. Adele Clerk.... She's a 23 years old college dropout, working in a restaurant to save money for her sick mother Operation. Her father is an irresponsible man. What happened when Adele father sold her to The ruthless Nathan, just because he can't pay back the money he borrowed from him. It's not as if he used the money for something reasonable, He spent the money he borrowed from the ruthless Nathan on Alcohol and ladies younger than his daughter.

SUBTITLE:- SOLD TO THE HEARTLESS MONSTER.😌

"How dare you talk to me in that manner, have you forgotten I am your father, or have you lost it" My father yelled.

"And you aren't ashame to called yourself a father, look here Mr clerk, am still giving you little respect has my father because of mum, you're very shameless, just take a look at the lady you brought home" I said and the man I called my father burst into laughter.

"Are you jealous of her beauty?" He asked.

"Did you just called this beauty?" I asked and spat on the floor.

"yeah, I am more beautiful than you are, you f00l" the lady said.

But wait did this lady just refer to me as a f00l heaven knows I won't let this slide.

I drop my hand bag on the table and drag her by her hair.

"Aren't you ashame of yourself, a young girl like you going out with a man old enough to be your father" I said dragging her with her hair.

My dad move closer to me and gave me a slap that made me roll on the ground.

"Dad did you just slap me because of this b*tch?" I asked angrily.

"Adele that's enough" mum said and I eye Dad angrily and turned to walk away.

"Come back here" dad said. I placed my hand on my waist waiting for what he has to say.

"When are you collecting your salary?" He asked and I burst into laughter.

"Which salary?, Is it the one you and I worked for?" I asked.

"Tell me once you collect your salary I wanna use it for something important" my father said and walked out with the girl he brought home yesternight.

"Adele you should have known the kind of person your father is by now" mother said.

"Mother can't we just move out of this house for him?" I asked.

"No I can't move out my family will Mock me" mum said.

"Mum forget about what people will say"  I said and bend down to her level.

"Adele don't you think you're getting late for work" mum said.

"Mum I know what you're trying to do" I said and stood up, i pick up my bag from the table.

I moved closer to mum and peck her on her cheek. "I will come back early" I said and walked out. That man just spoilt my mood.

Nathan look at the pile of files in his front and growl out.

"I need a new secretary" he said and adjust his suit properly. You might be thinking what happened to his old secretary, he sacked and locked her up because she came late to work.

"Wyatt!" Nathan called and his personal assistant walked inside his office immediately.

"Did you message her?" Nathan asked. "Yes sir, but she hasn't reply Me" Wyatt replied.

"Get me a new secretary the first thing tomorrow morning" Nathan said and a message pop into Wyatt phone.

"That's a good news to you, to me it's not a goodnews" Nathan replied and stood up from his office chair.

"Send her my house address and tell her the amount am gonna pay her" Nathan said.

"No sir, and I have been calling his number since yesterday but he's not picking up" Wyatt replied and Nathan burst into laughter and Wyatt move back immediately.

He knows his boss only laugh when he is planning to do something evil.

"Let's go visit him, am sure Leo will be more than happy to see someone like me in his house" Nathan said and walked out and Wyatt also walked after him.

His driver quickly open the car door for him immediately he saw him and Nathan sat at the back seat.

*****
Nathan sat down with his leg cross in Mr Leo sitting room waiting for him.

Mr Leo open his door and was surprised to see Nathan sitting comfortable on his chair.

He opened the door gently to run back. "Don't you dare move an inch!" Nathan thurderous voice stopped him and he stood still.

Nathan stood up from the chair and move closer to him and he raised his chin up and smile at him.

"When did you promised to pay my money?" Asher asked. "Two days ago sir" Leo replied shaking. "Two days ago?" Nathan asked and Leo nod his head.

"So have you pay?" Nathan asked. "No sir, but I promise to pay you back next week" Leo replied.

"You and I had an agreement, but you refuse to pay me back my money because you are waiting for me to show you the stuff am made off isn't it?" Nathan asked.

"Am very sorry sir" Leo said. "Wyatt!" Nathan called and Wyatt rushed to his side.

"drag him to the car, I love it when ingrate like you refuse to pay back the money you borrowed!" Nathan said and walked out of the house.

ADELE P.O.V
"Babe why is your face like this?" My friend Claire asked. "Am just tired of that man that called hiself my father" I said and Claire burst into laughter.

"What's funny, what happened to you, why are you laughing like a physcho?" I asked angrily.

"Where's that bald head man?" I asked referring to our Manager.

"Ah, I will go and tell him" Claire said. "Hey come back here" I said and run after her before she walked to the manager office.

"Good morning sir" I greet my Manager. "Adele are you tired of this work?" My manager asked and I stare at my shoe.

"Can't you talk?" My manager asked and bang his hand on the table angrily.

"Mr clerk, can you see what you caused, this baldhead man is gonna me hypertension today"
@