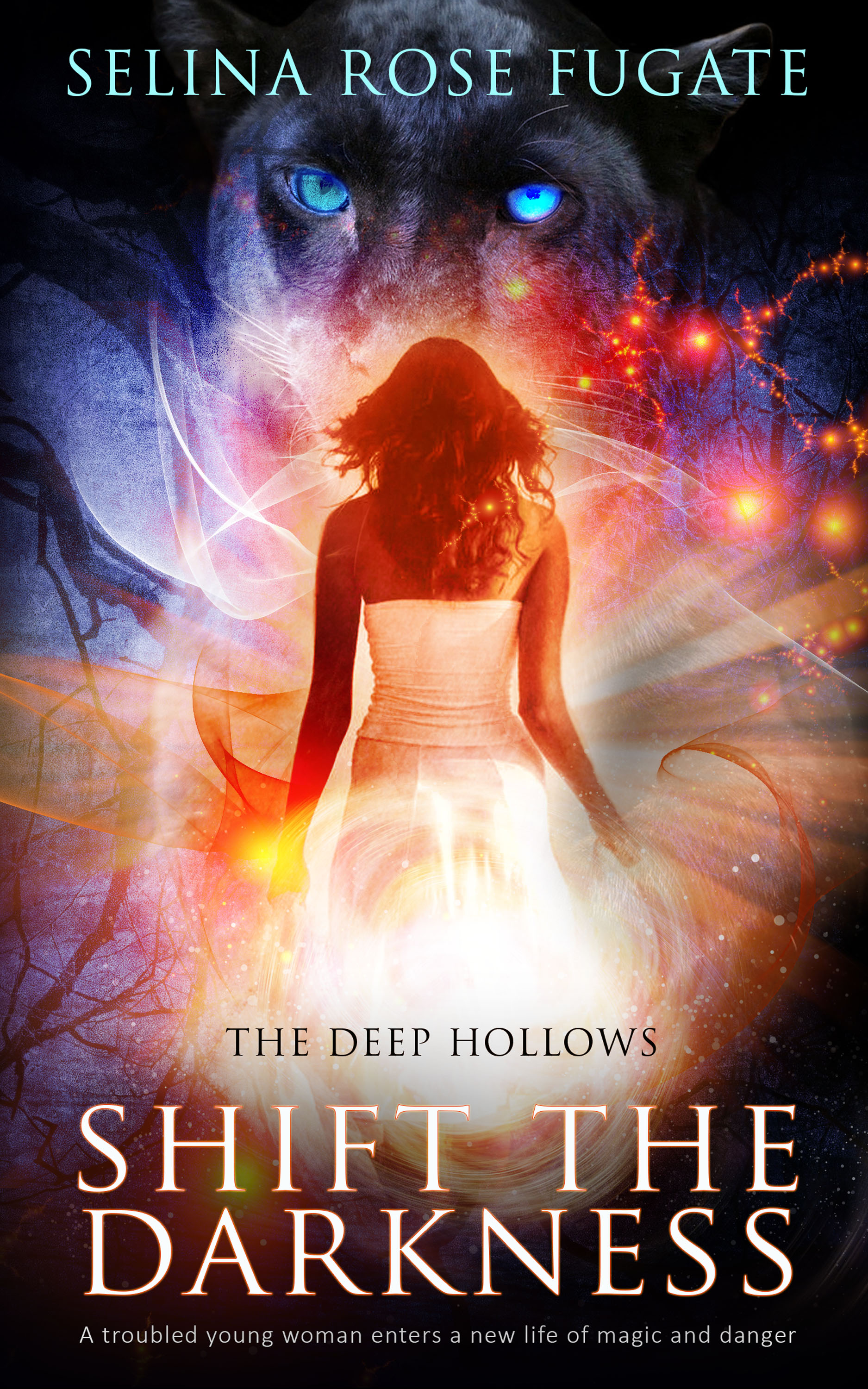 Deep in the mountains of Perry County, Kentucky, a troubled young woman enters a new life of magic and danger. Wren is fresh out of high school, and her life is a mess. Her mother is dying, her aunt couldn’t be more overbearing, and her moods are wildly unpredictable. On a mission to self-destruct, she’s driving her aunt crazy with drinking and broken curfews. But Wren isn’t just acting out—something inside her is changing. After being attacked by a red-eyed man and being rescued by a beast that transforms into a gorgeous boy before her eyes, Wren discovers that she’s a shifter, able to take the form of any animal she makes contact with. Complicating matters, Wren finds out she is a special kind of shifter—a tracker—and a powerful vampire needs her help to find the rogues of his clan who are planning to destroy the town, and everyone in it. In return for her help, she’s promised the one thing she wants the most—her mother to be cured. Wren will have to choose between the safety of a familiar embrace and the fiery touch of the boy who makes her question everything she thought she knew. In order to survive the trials ahead, she’ll have to open her heart, and find the strength of the woman she’s destined to become.

I staggered, holding on to the top of the car door for support. One of my fake nails broke in half as it snagged on the black foam lining of the door’s frame. I slurred a string of curses, rolled my eyes, and smacked at the hand tugging at my shoulder. I was just a little drunk, and more than a little stoned. We’d smoked a bowl only five minutes prior and I felt invincible, even if my nails were not. But Steve was annoying me. It was time to set him straight. I’d gotten what I’d wanted for the night.

“Fuck off, okay? I said no. Maybe I’ll have a change of heart tomorrow, but as of right now, I suggest you get reacquainted with your palm.” I rolled my eyes and made a suggestive hand motion for emphasis.

The tall, lanky, blue-eyed jock in front of me let go of my shoulder as if it had just burned him. The hand he’d removed hung suspended between us, the fingers flexing for a second and crushing on air before he ran them through his stylishly messy blond hair.

His hands went to his hips, and I almost regretted that I’d never see him naked. Earlier he’d taken me out for a cheap burger, told me I was pretty, and had driven me to a well-known make-out point. In Steve’s mind, that should have been enough to get him laid. Instead of letting him rip my clothes off to the sweet sounds of the local high school basketball game blaring from his radio, I’d brushed off his fumbling hands and had at once burst out laughing when he’d whispered lines he’d obviously picked up from a badly written rap song in my ear.

Now, standing in the grass of my front yard, I watched with a smile as he tilted his head to the sky, breathing deeply. I knew what was coming, and I waited for it. Steve didn’t miss a beat.

His expressive, handsome face, which had been flushed with desire just thirty minutes before, transformed and he gave me the look that every nerd before graduation feared. His top lip quirked up, his eyes narrowed, and the adorable dimple in his chin seemed to deepen.

“Fine, Wren. Doesn’t really matter anyway, because tomorrow everyone will think otherwise. I’ll even add a tattoo on your ass when I explain in vivid detail how we—”

A mere three months ago he would have snubbed me in the hallway, but now that school was over I was suddenly his favorite subject. Earlier that week, he’d conveniently jogged by my house, sweat glistening on his rock-hard abs with white shorts slung low. I’d been taking out the trash, and he’d stopped and lifted the heavy, reeking bag from my hand and had insisted that he carry it the remaining two feet to the garbage bin. It had taken him approximately five minutes to get my number and set up a date. He’d told me some lame story about how he’d always had a secret crush on me, but was too shy to approach me. I’d said awww in all the right places, pretending to be flattered that he’d lower himself to associate with someone as unpopular as myself, and I’d flipped my hair and giggled when he had told me I had beautiful eyes. His confessions had been crap, and I had known it. Three months prior I had been invisible to his kind. But then again, three months earlier I’d had morals and actual goals. As he stood before me now, I faced my own nasty truth—I’d never liked Steve. His self-assurance had made me want to wound him from the moment I’d shown up on his map as a possible adventure. He was a jerk, but really, I was no better. It was a game to both of us. He wanted to take off my clothes and discard me, and I wanted to take the confident smirk off his face. I wanted him to pick himself apart like the girls I’d seen crying in the school restroom after discovering Steve had given the whole student body a detailed description of their lady-bits after seducing them the night before. Most had been virgins, if you could believe the rumors.

I needed to feed the cruel beast inside me that had been growing at an alarming rate. Even I realized that something wasn’t right, that something inside me was changing. I was on the edge, which was understandable with all of the crap I had going on, but on some level I knew that it was more than a coping mechanism. Something was ready to break.

I staggered into him, pushing my body against his, smelling weed and the expensive cologne his mother had probably bought for him. I felt his muscles tense for a moment, then he relaxed, letting his hand slip down the small of my back with a little more pressure than he’d used earlier.

“Jeez. I’m sorry, Wren. You know I’d never do that, right? You just look so hot tonight, and I’m, you know, getting strong feelings for you.”

I snuggled closer, allowing a slow smile to shape my glossy red lips. “I know, Steve. It must be hard knowing that for all of your popularity, and all of your dad’s money, the real world doesn’t bow to your every whim. High school is over. You’re always going to be a big, stupid jock who will never play professional football and will never, ever find out if I really do have a tattoo on my ass.”

I kissed his cheek before my words had registered and stepped back quickly before he had a chance to strangle me.

He thought about hitting me. I could tell, but he settled for spitting in my direction and digging the jacket I’d forgotten out of his shiny new Jeep Cherokee. He threw the jacket on the sodden grass, flipped me the bird, then hopped into his Jeep and peeled away. I stood on my tiptoes and cupped my hands around my mouth, not caring that they were stained with resin from my herbal escapades.

“Hey! Thanks for the smoke!” I yelled loudly, my voice cracking a bit with laughter.

I wasn’t sure, but I thought I’d seen his eyes glistening with more than the effects of the weed before he’d hopped into the driver’s seat.

I giggled, picked up my jacket, and set to gnawing on my ruined acrylic nail all while humming some nameless tune. I staggered through the muggy mid-August breeze, stepping on the cracks of our sidewalk since I was pretty sure a broken back was the least of my mother’s health risks, and made my way to the front of our one-story white farmhouse.

Aunt Maggie was waiting just beyond the threshold. Dark circles stood out below her eyes, her hair was thrown back into a messy bun, and the pink pajamas with little cutesy ducklings on them even managed to look ominous. I would have made a jab if I weren’t so damn hungry. I’d have hugged her if I weren’t so annoyed, but instead I sauntered by, hanging my wet jacket on the coatrack and yawning dramatically into my hand.

“Thought you were gonna be home three hours ago, Wren. It’s two in the morning. Where the hell were you?”

I sighed, flipped my hair, and made my way into the kitchen without giving my angry aunt a second glance. I pulled a freshly washed bowl from the dishwasher and searched for a spoon in one of the kitchen drawers. Reaching up, I flung open an overhead cabinet and pulled down a half-empty box of Cocoa Puffs. I flicked open the box top and shook the cereal out sloppily, causing several of the chocolaty puffs to bounce onto the counter. I shrugged, knowing Aunt Mag would clean it later. I scooped up my load and made my way to the fridge where I toed open the door and grabbed a small jug of milk. I cradled it to my chest, almost dropping my cereal, and somehow managed to twist off the lid. When I poured the white liquid over my late snack only a little dripped into the floor.