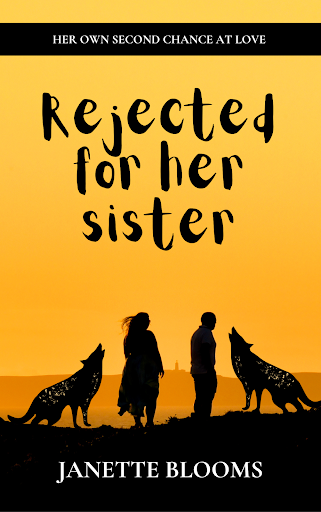 Rejected for her sister

Mika is wolfless, when she turned fifteen her wolf was nop where to be found. Growing up, the other packmate usually refers to her as the human amongst them. She wasn’t as fast as them and she didn’t have strength, she wasn’t allowed to play with them. She hated it but there was nothing she could do about it. Her eighteenth was approaching and Mika had only one wish, to unlock her wolf abilities. Adulthood brings Mika a lot of surprises including finding out she was mated to the pack’s Alpha and how he had the hots for her sister. Harry did the unthinkable, he rejected Mika for her sister. Mika couldn’t handle the shame so she ran away. She is prepared to face whatever life throws at her, nothing to be away from a man who would rather stay with her sister than be with his chosen mate.

Mika turned and tossed in bed, not like she had any decent sleep over the night. Her hed chose the wrong day to throb and now she has to deal with the fact that she has less than an hour left to sleep before she wakes up to take care of the pack duties. She usually thinks it’s crazy having a wolfless person do all their duties when they have extraordinary strength to do it themselves. The world is such an unfair place to live in and she hated it here. But she was grateful, at least she had a decent roof over her head and she had access to leftovers on the day she didn’t have too many works to do. Maybe one day, when she finally became independent, she would run away to the human world Alpha had always threatened to send her to and she would get a college degree and maybe get a high-paying job and get married to a human too. It was quite easy to say but the reality was that settling down like that was probably something she couldn’t do till the world ends.

She looked up from the old storage room she had converted into her personal space and her eyes landed on the pile of old books the storekeeper had been grateful to let her have yesterday and that was when it clicked, Today was her birthday. She stood up from the make-shift bed and her face cracked into a smile. Today would either make her or break her but she had high hopes that it would turn out well, maybe she would finally be mated to the beta that she had a huge crush on or she would be mated to anyone else but Harry. He was the alpha and he was above her league plus he had the hots for her sister so no need to wish for that on herself.

She raised the bed up and she brought out the carefully wrapped dress Jenny had given her early this summer and she kept it for her birthday. It didn’t matter how today would end, she would make sure to make herself happy first before anything else. Nobody else mattered for today and she was going to be the center of her own attention.

All thoughts of sleep just flew out of the window as she sat down cross-legged on the bed thinking about how to make proper use of her big day, no one would probably remember she was turning eighteen today so she needed to look for a valid reason to be amongst a lot of wolves, she had to find her mate today and get over with it as fast she could. Even if he was going to reject her, she needed to get it over and done with as soon as possible. She needed to get away from all of them and maybe start her life afresh if she gets rejected.

She was whistling when the loud bang on the door reminded her of the fact she needed to get to the kitchen as fast as possible, breakfast had to be made and she would hate to overwork the others by appearing a tad bit late. Her conscience would eat her up. So instead, she rushed up and headed over to the tiny bathroom, she created and she made sure to minimize the water so it doesn’t flow back into her room. She smiled at the thought of when Jenny intentionally left the tap running and her whole things were soaked including her book. That day was very bad for her honestly and she spent the next few weeks making sure everything became dry. All her precious books were ruined and there was nothing she could do about it.

She skipped down the stairs and she headed down into the kitchen making sure she didn’t make too many noises, the elite wolves would still be sleeping and the last thing she wanted to do was to gather punishments on her big day. She walked into the kitchen and she waved at the other omegas before taking her usual spot in front of the dough. She started kneading after someone else already prepped it. She was whistling lowly trying to avoid getting into trouble. Today was her day and she needed to be extra careful. Someone tapped her shoulder and she turned back to see the other holding a birthday cake. S he gasped because she thought they had forgotten about her and now she had to make sure she didn’t cry. This was literally the sweetest thing anyone had done for her in months.

“You thought we forgot?” Amelia asked and Mika nodded, unable to say anything else. The cake was tiny, it was obvious the length they went to make sure she got a birthday cake. She stopped kneading the dough before going close to them and engulfing them in one big hug, she would be forever grateful to them for this chance. She was very close to tears because these people served as her family when the real family abandoned her.

“Don’t cry baby, you will find your beloved today and you will be free from all the shackles of being here. He would sweep you off your feet and boom, you will live happily together forever.”Kasey said and Mika laughed. In all honesty, they all knew that the chances of that happening were low and the chances that he would probably reject her were higher than the chances of him accepting her. They chose not to speak about that instead, they focused on the good sides only. A part of Mika couldn’t stop thinking about that also, this weird feeling of ending up rejected and all of that bad stuffs.

Mika followed the rest of the girks to go and watch the fighting grounds. Today was a sparring match between the senior wolves and most girls love to be present because it was where they could ogle at them wihtout feeling weird or ratioed for it. The boys usually enjoy the attention too so it was a win win situation for everyone. She stood just by the fence and she coul get a clear view of the fight from where she was.

She looked up to see Jenny her sister waving frantically at her to come forward and she groaned. Not today of all day, you satan. She walked towards her to be on the safer side and she could suddenly feel her heart rate spiking, as if something was about to happen to her and she coud feel restless. She dismissed it as her being scared of whatever Jenny has planned out for her. Jenny was like an anegl and a devil in one body. One minute. She’s being exceptionslly nice and the other minute, she acting like a devil spawn.

“Hey guys, today is my darling sister’s birthday and y’all please wish her a happy birthday so she doesn’t find a mate in you” She snickered at the last part and Mika felt terrible more. She understand Jenny was trying to make her feel happy on her day but she coiukd do that without belittling her or making her feel worthless. The rest of the pack laughed before they started singing a happy birthday song in the loudest and most irriating voice Mika has ever heard.

“Yo, what’s that smell?” Harry, the Alpha’s son asked from the entrance and all eyes snapped to him, interrupoting their ridiculous song moment. Mika’s breath hitched as all hairs on her nape stood at attention and she could no longer se anybody else, all attention focused on Harry and it seemed the same thing was happening to Harry too. He was takking slow steps towards her and she was walking towards him too. The crowd aprted and watched in awe what was happening. Jenny was going crazy at the thought of everything happening and she saw the way they were both walking towards each other like possesed humans. She had seen it happen times and she knew exactly what was happening. She couldn’t undertsand why it chose to be Mika of all people.

Mika and Harry stood in front of each other and none of them said anything. Harry stretched his hands out before he touched Mika’s face, his next words shook everyone to thier cores and Mika never thought for once that she would ever hear anyone say that to her.