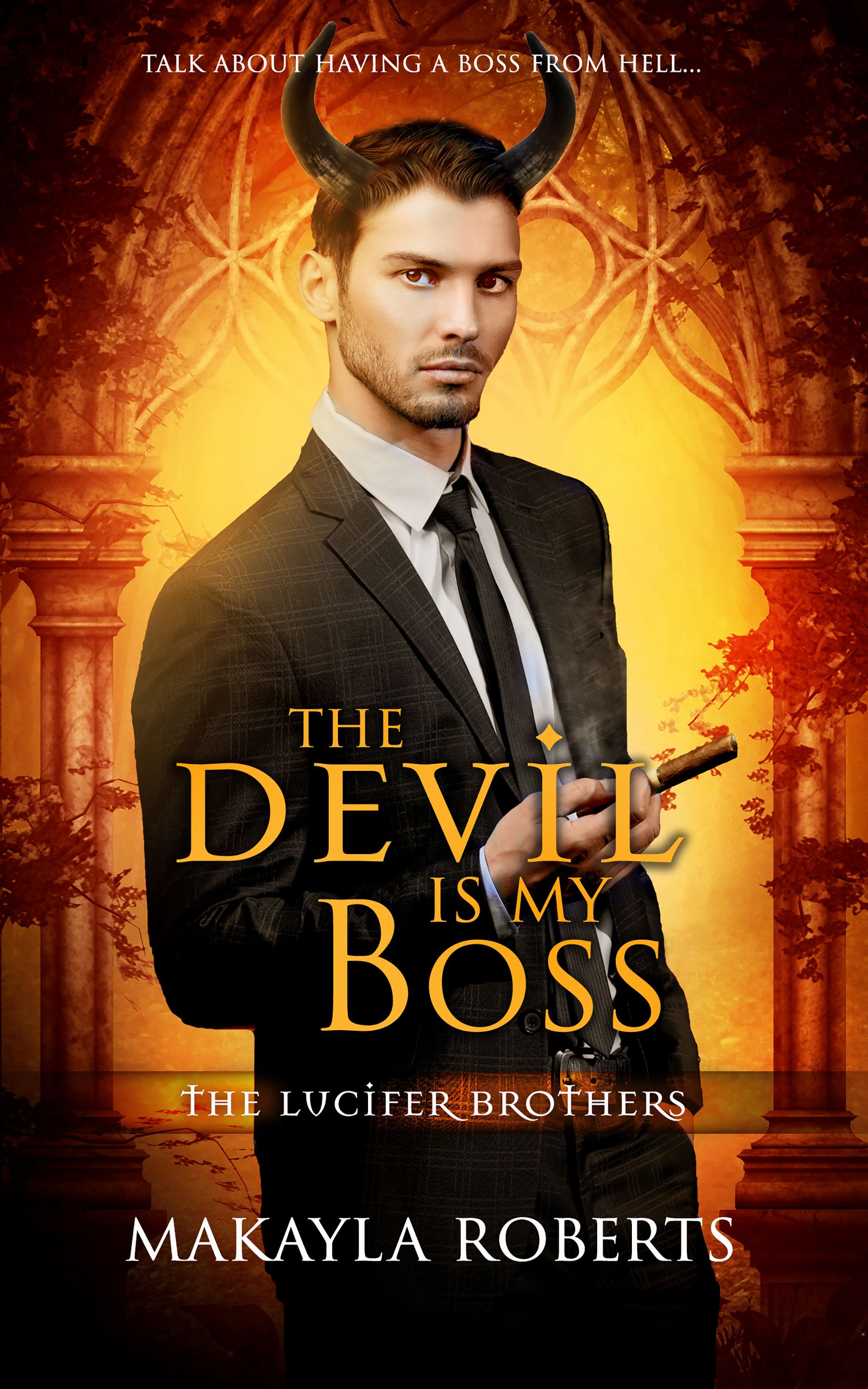 The Devil is My Boss

Talk about having a boss from hell… Rhys Lucifer has ten days to find someone to replace his second-in-command, and he has his eyes on Remington Sawyer, a fearless data entry clerk whose beauty and quick wit tempt him into breaking his no-sex-with-employees policy. But her sensual looks aren’t the reason he wants to promote her. With a rap sheet showing she’s efficient and level-headed in the midst of chaos, she’s just the person he needs to accompany him on a business trip from hell—literally. There’s just one problem. “No thanks.” Remi loves her simple job. She loves her relationship with her peers. Most of all, she loves the fact that no one knows who she truly is. Becoming COO would just screw up everything. Sure, the money would be a bonus, but not the stress that would come with the job. And as melt-worthy as Rhys is, the way he keeps looking at her is bound to stir all kinds of trouble. Still, the offer is rather tempting—both him and the job.

The shout was followed by the furious slamming of a file cabinet. Rhys Lucifer stood near the door, the only exit in the spacious office. Well, not unless one counted the floor-to-ceiling windows, though he doubted his employee was mad enough to jump to his death. “Come now, Ivan. We can talk about this.”

The male whirled around, narrowing his eyes in disbelief. “Talk? There’s nothing to talk about!” He slammed another drawer then used one arm to sweep his personal belongings off his desk and into the cardboard box he held under his other arm. “Seven months of utter hell.”

“Well, we are in Sheol,” Rhys drawled, not at all helping the situation, “which is technically what’s referred to as—”

“I know where the fuck we are,” Ivan snarled. He pointed a shaking finger at Rhys, his Russian accent thick with his madness. “This job is… It’s… I don’t even have the words for it, but I quit! No demon in their right mind should ever agree to this position. I don’t know what I was thinking.”

Money, no doubt. Money and power, Rhys thought. It was the same with everyone who was brave enough to take on the job as his COO.

Rhys grunted and shifted his weight to one leg as he watched his chief operating officer march around the mahogany desk to stalk across the room, his box tucked a bit too tightly under one arm. His eyes were desolate with dark circles that spoke of restless nights, the uncombed toupée atop his head lopsided. There was a shadow across his jaw, making it clear that he hadn’t shaved in several days, either.

“Difficult?” Ivan echoed on a bark of laughter. “I’ve had less than fifteen hours of sleep in the past week.” He waved his free arm to indicate the piles upon piles of paper stacked on the floor. The movement caused his toupée to slip from his head and fall onto the desk, not that he seemed to notice. “All this work is far too much for one person to do, and between the board meetings, employee requests and upcoming events—never mind that with the wars going on topside, the mortal death tolls increase each day. No way, man. I quit! I’m done.”

Rhys shifted his weight to his other leg, mild panic welling at the notion that the employee he needed the most to help him through these critical times was quitting on him. Again. “Ivan, please. Think about what you’re doing. What about the Séance Convention coming up? I can’t go it alone, and you’re the only one with the proper knowledge to accompany me. Plus, there’s no time to train anyone to fill your position before then.” He paused. “I’ll give you a bonus. How does an extra four thousand sen sound?”

Slowly, Ivan turned to face Rhys. His irises changed from black to red, a sure sign of a pissed-off demon. It didn’t matter that Rhys was his boss or that he was the oldest son of one of the most important men in the underworld—nor did it seem to matter that, at six-three, Rhys had a good foot and a half on him. The look he was receiving was one of pure disgust.

In fluent Russian, Ivan jabbed a finger in the center of Rhys’ chest and said, “Fuck that convention, and you can shove your money up your ass.”

He snatched his toupée off the desk and slammed it on top of his head. Then he marched out of the office.

Chin dropping to his chest, Rhys watched Ivan storm down the maze of cubicles lining the floor and to the far side, where a bank of elevators sat behind a set of glass doors. His now-former employee tapped his foot as he waited for one of the elevators to arrive. When it did, he stepped inside and faced Rhys and the multiple pairs of eyes watching him. Then, just as the doors slid closed, he raised his hand high and gave them all the bird.

And that was it. Ivan was gone, having quit after only seven months. Rhys shouldn’t have been shocked, since the man before Ivan had resigned after an even shorter time. Hell’s bells. He’d taken over this portion of the family company twenty years ago and, in that time, he’d lost double the number of COOs. Not that any of them had been particularly good at their job, but someone needed to fill the position, and the majority of them had all the qualifications.

Now he was back at square one, with large shoes to fill and less than two weeks to do so. Just freaking terrific.

With a dull throb forming between his brows, he exited the office and closed the door. When he glanced at his employees watching him with wide eyes, he snapped, “Get back to work!” There was an immediate clack of keyboards as everyone did as commanded, no doubt fearing he was in a firing type of mood.

He relaxed his expression to one of ice, striding across the floor to the elevators. Gods below, he needed a damn drink. No, he needed the whole bottle and then some. It’d been a long-ass day, and it wasn’t even eight o’clock yet, damn it all.

Stepping onto the elevator, he pressed the arrow going up with far more force than needed. The ride up was four floors, but it may as well have been the entire thirty-plus that made up this wing of the building. When the doors opened once more, he stormed out, heading for his private office.

He rounded a corner and his secretary perked up. “Good morning, Rhys…” She trailed off, her smile waning as she took in his fuming expression.

His steps never faltered as he strode past her. “Pull up a list of this division’s employees and compile a separate list of those qualified to take Ivan’s place.”

Kelle’s eyes widened a bit. “Yes, sir,” she responded, swiveling in her chair to face her computer. There was no hesitation, no questions asked, just swift obedience, which was one of the reasons Rhys had hired her a decade before. He was a man who gave orders and expected them to be carried out to the fullest. Otherwise, someone ended up demoted—or fired.

And that was just him being polite.

With a deep sigh, Rhys entered his office. He skipped his desk and opted for the black leather sofa across the room.

Ten days. He had ten days to dig through his employees to determine which one would be qualified enough to take on the job of COO. Granted, it was a tough spot, but the benefits that came with it were incredible compared to positions of lower status. Anyone should feel honored to be promoted, especially in this line of work.