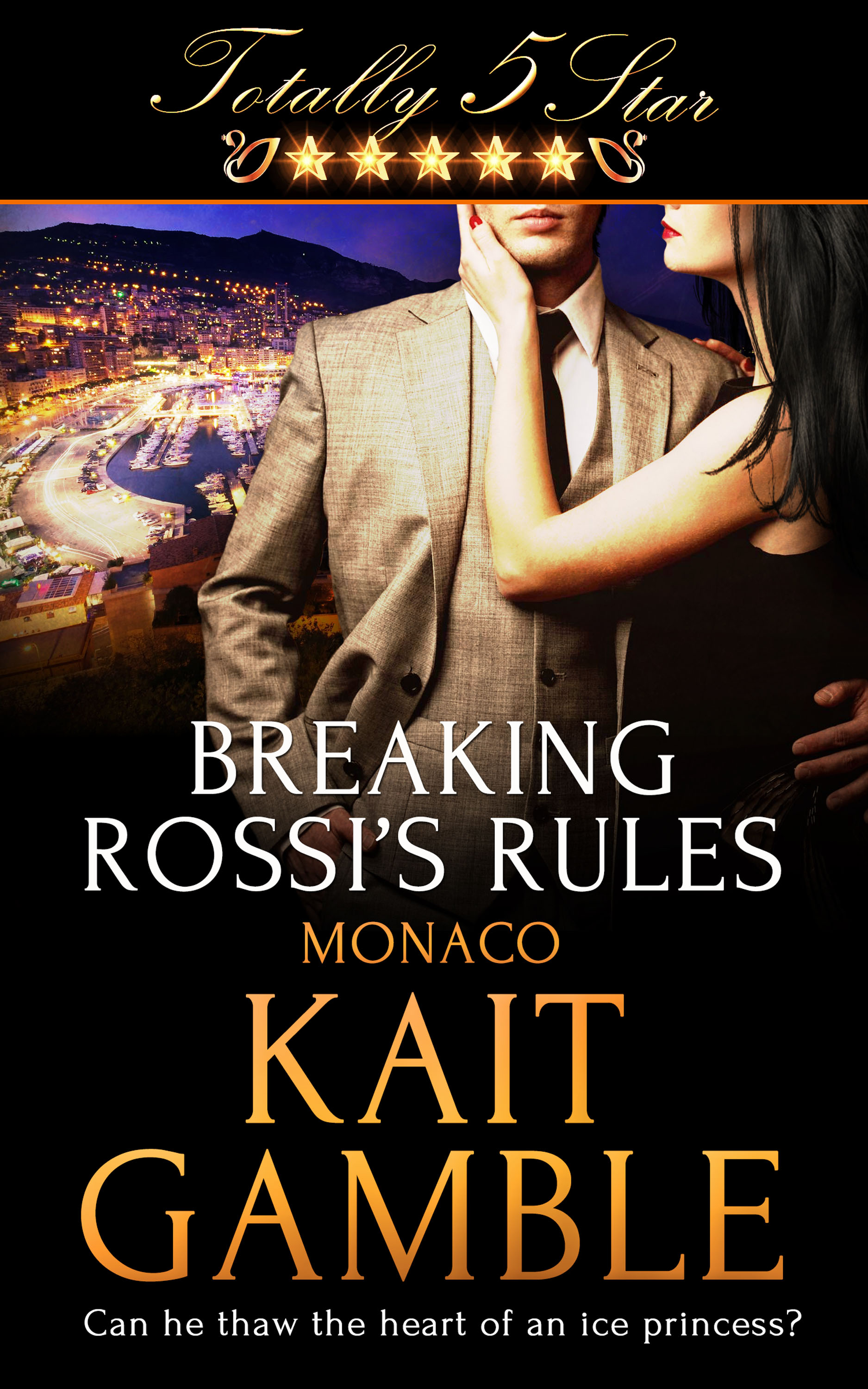 Can a blackmailing billionaire thaw the heart of an ice princess? Searching for an escape from her life, heiress Anika De Winter takes up her friend’s offer to get her into the exclusive Totally Five Star hotel in Monaco. It isn’t until she arrives that she finds her friend’s intentions, although likely good, thrust her right into the autocratic hands of billionaire venture capitalist Luca Rossi. In need of a diversion, Luca had planned to spend the weekend with ‘a friend’ but finds she’s been replaced with icy Anika. He’s never been quite as intrigued by a woman before. So he proposes a deal. She spends time with him and he doesn’t say a word about how she got the room. Trapped, Anika shouldn’t feel so attracted to devilishly handsome Luca. But the chemistry between them is explosive and it doesn’t take long for them to succumb to passion. But will it burn out when their time in Monaco ends?

Anika could hear the vultures through the tinted windows of the limo. Couldn’t they just back off for a second? There had to be other news out there—besides her being left at the altar. Wasn’t there some war going on? A banker caught embezzling? Surely, there was something more newsworthy than her life, or lack thereof, to report on.

“Ms. De Winter!” The horn-rimmed glasses and pink hair gave away the identity of the short woman grinning inanely in the front with her phone pointed directly at her. The blogger was like a piranha. And for some reason, she always focused on Anika. What was it she called herself again? Pink Penn? Pink Poison more like. The name was fitting.

“Is it true that he wasn’t able to thaw the heart of the Ice Princess?”

It had been three days since she walked out of her own wedding, husbandless. What she hadn’t realized until she’d gotten through the gauntlet of media and into her apartment in the trendiest part of London was that she wasn’t at all upset. In fact, she felt free. The wedding, the preparations and the lies that surrounded it all had been wearing on her. It was so much fuss over something that was little more than a merger.

The paperwork that had been dispassionately signed by herself and her fiancé, Joshua Rhys-Jones, not two days before, delineated the fact in precise terms. Their families had been rivals for years but with the economy tanking, their fathers had the genius idea of merging their dwindling fortunes. It was an asinine idea, but there wasn’t a thing they could do to go against the wishes of their families.

Joshua wasn’t ugly by any means. He was well educated, looked good on her arm, and by all measures a stellar catch. She just didn’t feel anything for him besides appreciation for her family’s sake. He had admitted he felt the same. There was nothing romantic between them whatsoever, but they would make it appear how they wanted for the cameras just like they had been doing for the entirety of their lives.

So when he hadn’t shown up for their wedding, she’d felt a myriad of emotions, though none of them had been sadness or shame. But whatever it was she felt was overridden by relief. It did, however, leave her confused and struggling to find the façade to use. When faced with the swarms of reporters and their questions, she didn’t know what to do or how to act. It was just better to stay away from them.

“Drive on!” Anika didn’t know what possessed her to think that it was okay to leave the apartment. No matter when she did, they were there ready to jump in her face. “Take me back home.”

The car immediately started a slow roll through the throng and into the treacle-like traffic. What she wouldn’t give to make it all go away.

Her phone trilled from inside her handbag, drawing her out of her misery. She extracted it and saw the familiar name. She swiped the screen. “Petra, you have to save me.”

The voice on the other end burst into laughter. “Down in the doldrums, are you, darling? And after all the excitement?”

“You have no idea. The vultures won’t leave me alone. No matter where I go, what I want to do, they’re always in my face asking ridiculous questions. And why? Who cares? Why do they give a fig about my life?”

“Because the common people are enamored by the life of the rich and famous—especially when it crashes and burns. That’s when they like to point and stare. It’s the same logic as people who have to slow down and look at a car wreck.”

Anika sighed. “So now you’re comparing my life to a car wreck.”

Anika laughed for what felt like the first time in eons. “I need to get away from all of this. If it’s not the paparazzi then it’s my family.”

“You should set them all on Joshua. It’s his fault anyway. Let him deal with the fallout.”

That would be so fantastic. “If only.”

“Well. If no one can find you, then they would have no choice, right?”

“And how would I manage that?”

“This is why you made friends with me at boarding school. You never would have survived otherwise.”

Anika rolled her eyes. “Just tell me your plan.”

“Well, you know who my mum is. I could pull a few strings and get you the hell out of there and into paradise.”

It was well known that the famed Claudia Bauer, PA extraordinaire to the equally illustrious James Conroy III, was the gatekeeper to the Totally Five Star world. Anika absolutely believed that Petra could pull some major strings.

“So far this sounds good. What’s the catch?”

The melodramatic gasp on the other end of the line made Anika smile.

“Can’t a girl help out her friend?”

Anika was well versed in the kind of help Petra was capable of. Some of the time, she came through with flying colors and others were a downright disaster. The number of occasions they’d ended up across the desk getting a dressing down from the head mistress made Anika cringe. The fact that they were usually down to some insane plot hatched by her dear friend didn’t instill confidence in Anika.

“So what do you say?” Petra asked eagerly.

What did she have to lose? At the worst, she’d get away from London for a little while. “Okay. Just make sure that it’s not going to backfire on me.”

Laughter burst on the other end of the line. “When have I ever steered you wrong?”

“The time you got me to sneak out by climbing down the trellis and I fell onto the Head Mistress’ car. Or how about when you said no one would ever know it was us who swapped out the soap in the bathroom dispensers with red dye?”

“That was a brilliant one! We never would have gotten caught if it wasn’t for the cleaner who told on us.”

“Or how about when you thought it would be funny to dump washing powder in the fountain?”

Anika groaned. “Until it turned into a bubble monster that threatened to devour the grounds.”

Petra’s laughter tinkled through the phone. “We had some fun, didn’t we? And I swear that I’ll get you in somewhere great!”

“You’d better or this friendship is over,” grumbled Anika. It was a well-worn threat that she never managed to follow through with.

“Bah! You’ve been saying that for years. You love it and you know it.” Petra paused a second before she gasped. “I’ve got the perfect place! Monaco!”

Anika slapped her hand to her face, nearly mangling her forgotten sunglasses. She righted them and sighed. “I want to lay low.”

“It’s perfect! You don’t have to worry about privacy violations. Have you ever seen paparazzi pics from Monaco?”

“That’s because paparazzi aren’t welcome there. The place might as well be saying ‘Come for a visit, Anika De Winter! We’re perfect for you!’” Petra barely paused to breathe. “Look, just leave it all to me. Get yourself to Heathrow and I’ll take care of the rest.”

“Don’t even bother to pack. Just get to the airport. You can thank me later.” She clicked off.

Anika banged the phone against her forehead before shoving it back in her bag. She pushed her sunglasses to the top of her head and rubbed her temples. She had to be crazy to let Petra talk her into another one of her schemes.