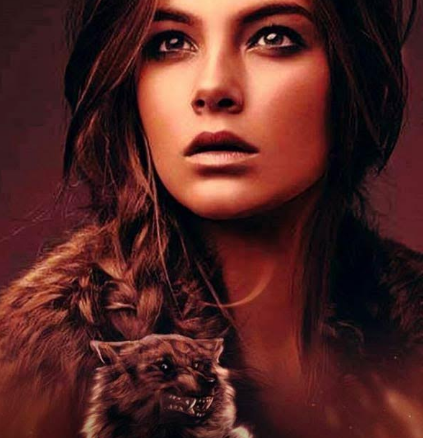 Elizabeth is a normal, clumsy woman working at a small, normal bakery. That is, until one night leads her on a chance encounter with a movie star manager. The star himself wants to get to know her. She isn’t so sure, but after a terrifying encounter with an interesting beast, she decides there’s something more going on and agrees to see him. Paul is a brooding movie star with a terrible secret. He’s able to transform into a monstrous wolf creature. Worse, his career is on the down-slide and he needs a way to garner attention. His manager comes up with a scheme to show off an ordinary woman. They go in search of one, and she’s more than he expected. He feels drawn to her through a deeper connection than he cares to admit. Long ago a white witch had prophecied that an heir will save the council from the ruin of macus... Watch had faith helps Paul fully the destiny of a young girl.

The speaker was a tall man on the good side of middle-age. He wore a crisp gray business suit that suited his slim physique. The man plopped himself into a chair in the large drawing room and looked at the luxurious home around him. There were priceless vases atop wooden cabinets, paintings of landscapes and people on the walls, and a real wood floor that was carpeted with oriental rugs of various ancient vintages. A fire burned in the hearth to his right, the mantle large enough to roast a small heifer over those warm flames.

To his left was the open doors to the drawing room where was glimpsed a large foyer. The floor there was marble with white walls filled with paintings. Across the foyer he glimpsed the long dining room with a thick oak table and accompanying chairs that could easily fit two dozen people. His lips twitched upward as he thought about all the silver utensils safely locked away.

"A couple more months like this and you might have to sell some of this stuff," he added.

The man spoke to a darkly handsome gentleman of thirty-five who sat opposite him on a long couch. The man was a touch over six feet tall with short, black wavy hair that was combed back, but not tamed, and he had short sideburns. He had a chiseled face and his dark eyes were partially hidden under bushy eyebrows. The shadows gave him a heavy expression that hid all his emotions but anger. The rest of his build was long and stocky, but not out of proportion. He lounged in the corner of the couch on his back with one arm slung over his eyes and the other draped over the back.

The man barely stirred. "You're my manager. Find something."

"I'm not a miracle worker, Paul. I can't just make someone want to offer you a movie," the first man argued.

Paul removed his arm from his face and glanced at the short man. "Then what do I pay you for?"

The other man frowned. "Come on, Paul, don't kid like that. You're not going to get rid of Al List after all these years, are you?"

"Who said I was kidding?" Paul returned as he sat up. He winced and rubbed his eyes.

Al studied Paul's clothes and face. His pants were torn to above the knees and his shirt was wrinkled. There were dark pouches under his eyes. Dark blotches of dirt and mud speckled his clothes and his shoes were missing. The tattered, filthy remains of his socks were wrapped loosely around his ankles.

Al sighed and drew a flask from the inner pocket of his suit jacket. He unscrewed the top and took a swig before he nodded at Paul's attire. "What time did you get back in?"

Paul raised his eyes to Al and frowned. "What time do you think I got in?" he snapped.

"Al, why don't you stop being an idiot and go find me some parts?" Paul told him.

Al slumped in his chair and threw up his hands. "How am I supposed to do that for a moody drama star, huh? You haven't had a hit in years and the box office returns on your last movie weren't that great."

"If you want to remind me of my failures then you may as well get out of here," Paul growled.

"Hey, is that any way to talk to the guy who's going to jump-start your career?" Al scolded him as he tucked the flask back into its pocket.

Paul arched an eyebrow. "Yeah? How?"

A big grin spread across Al's face as he leaned forward. "By getting you a girlfriend."

Paul's face drooped and his eyebrows crashed down. "A girlfriend? That's it?"

Al frowned. "What do you mean 'that's it?' That's everything! It's the answer to your problems!"

"How?" Paul questioned him.

"Well, just think about it," Al continued as he leapt to his face and paced the floor in front of his client. "You pick up a new girl and the press takes notice. You get noticed and the movie roles come pouring in."

Al stopped his pacing and frowned. "Why not?"

"Models have been done before," Paul reminded him.

Al shook his head. "I wasn't thinking about a model. I was thinking a normal girl."

Paul raised an eyebrow. "And what is a 'normal girl?'"

Al shrugged. "You know, a Plain Jane or something like that. One of those girls who didn't get to be prom queen but was worth a kiss or two in the dark corner."

"So we what? Go to an agency and ask for a rent-a-girlfriend?" Paul asked him.

Al dropped back into his chair and shrugged. "If you don't like my idea then I'd like to hear you give me a better one."

Paul leaned back and ran a hand through his disheveled hair. "With a plan like what you've got it'd be a better idea to wait."

"You haven't even let me finish telling you about my plan," Al argued.

Paul tilted back his head, closed his eyes and sighed. "Fine, finish it."

"So we get a plain girl or someone like that, and we set her up as this big mystery woman, see?" Al explained to him. "Then we take her to a premier or big party, and show her off for the cameras. We get attention and the movie roles come rolling in."

Paul tilted his head back and frowned at Al. "You forget one very important problem."

"My 'condition,'" Paul reminded him.

Al rolled his eyes. "Come on. It's not like we're going to be picking her up for a night of fun and you'll go all wolfy on her." Paul's eyes narrowed and Al was quick to hold up his hands in front of him. "All right, all right, talking about your 'condition' is off-limits today. I get it. Anyway, it's just one night, two tops, and then we never see her again. No touching, no biting, no problem."

Paul sighed and closed his eyes as he pinched the bridge of his nose. "And where do you propose we find this Plain Jane?"

Al grinned and leaned forward. "How about we go for a ride tonight?"

Paul opened one eye and arched an eyebrow. "What for?"

Al rolled his eyes. "So we can find the girl without someone spotting us."

Paul leaned forward so his elbows were on his legs, and his eyes stared across at Al. "The more you talk the worse your idea sounds."

"Just hear me out," Al pleaded as he jumped to his feet and slipped behind Paul. Al leaned over the back of the couch and lowered his voice. "Listen, we're looking for a normal girl, right?"

"And a lot of normal girls work, right?" Al continued.

"So a lot of normal girls get off work at five. We can pick one out then," Al finished.

"The cops are going to see us and wonder what we're doing staring at a bunch of women at night on street corners," Paul pointed out.

"We're only going to be picking up one, and that's if we find the right one," Al countered.

Paul sighed and clutched half his face in one hand. "Fine, you win. But we'll only try it tonight, and if we don't find her then that's it. We're done." He lifted his head and stared into Al's eyes. "Got it?"

Al grinned and clapped his hands together. "No problem, Paul! I'll be back here at five and we can go around town looking for her together." He patted him on the shoulder. "And don't worry so much. This'll turn out to be my best plan ever."

Paul looked ahead and pursed his lips. “That's what I'm afraid of.”