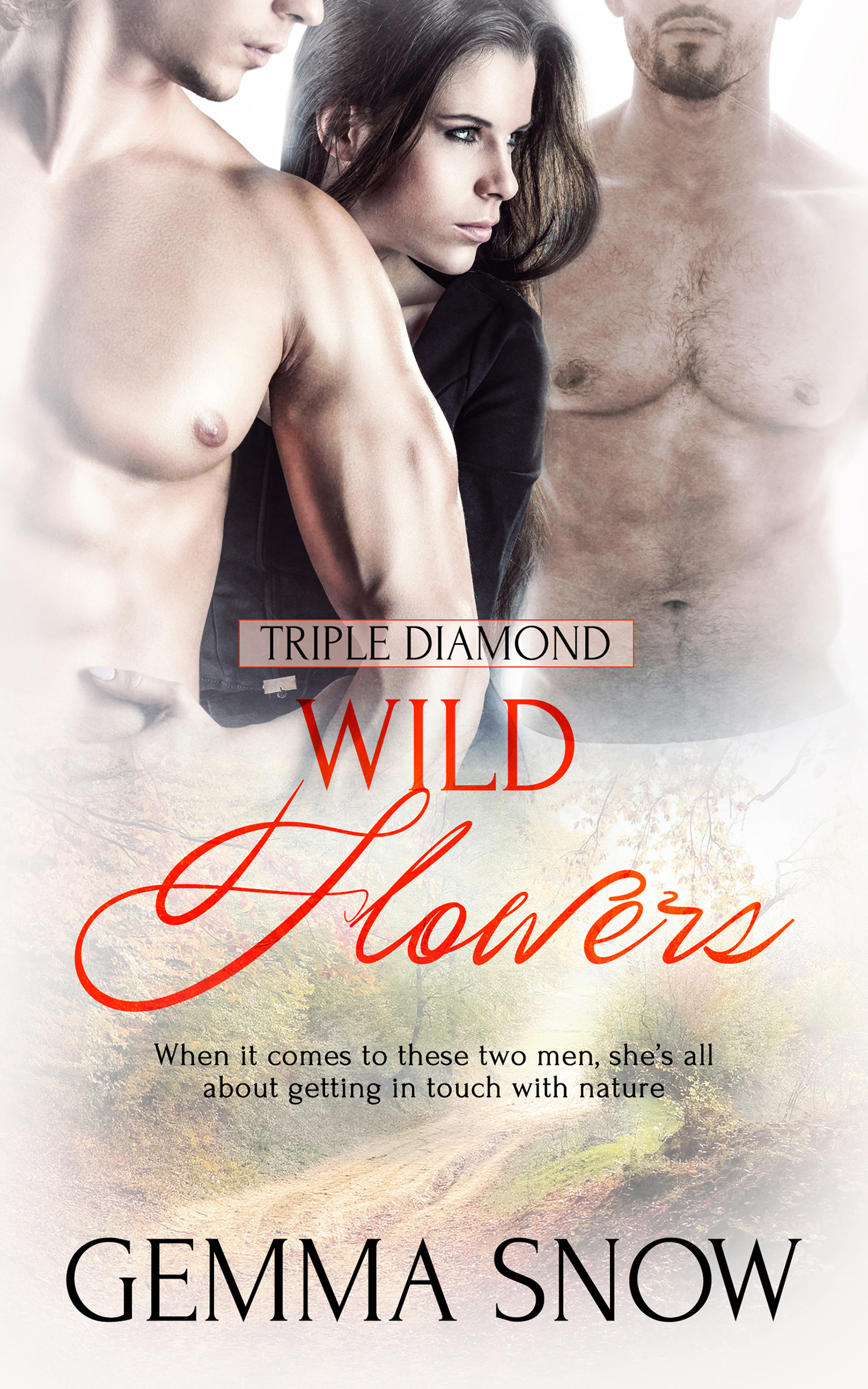 When it comes to the two very tempting search-and-rescue survivalists, Lily Hollis is all about getting in touch with nature… Five years have passed since her fiancé’s death and Lily Hollis has had enough. She’s done with the self-pity and the guilt and putting the brakes on her own life. She’s going to visit her sister, Madison, in Wolf Creek, Montana and she’s going to finish her master’s research, finally graduating, like she never did all those years ago. But Wolf Creek holds temptation, specifically in the form of the very sexy, very dangerous Dec McCormick and Micah Ellison, two search-and-rescue specialists who run a survival camp near her sister’s ranch. When they suggest she stay with them to complete her fieldwork, Lily is shocked to find herself agreeing. After all, she hasn’t wanted a man in a very long time and now she finds herself wanting two. Which is…complicated. Because, while some of the folks in Wolf Creek don’t mind unorthodox relationships, Dec and Micah are clear from the start that it doesn’t appeal to them. It’s a shame Lily’s fool heart can’t seem to get the idea, because the more time she spends with the two men, the more she finds herself caring—that is, until one damning question could bring everything to a crashing halt. Lily knows deep down that there’s more to whatever’s between them, but the question is, can she ever get Dec and Micah to believe it—and what might the future hold if they do?

Axel was trying hard not to get too far ahead of Micah to see, and Micah did his best to keep pace, following the large and very determined golden retriever down a steep incline, clenching his thighs and lowering his center of gravity to avoid sliding on the wet, fallen leaves that coated the Clark Mountain Range of Glacier National Park, at the edge of the Montana–Canada border. Axel, on his four legs, was doing a much better job holding his grip on the ground, but Micah had no desire to go sliding off the edge of the mountain and into the depths of the canyons below, so he whistled a command and the dog slowed enough for Micah to catch up.

Still, they kept an admirable pace and quickly came to a plateau of flat ground. High above, at the top of the ridge, Micah heard his partner Dec—Deckard McCormick—approaching with Rosie, Axel’s sister. Rosie kicked up a pile of leaves on the approach, clearly picking up on the same scent Axel had.

“Anything down there?” Dec shouted, the sound catching and echoing off the many flat walls of the mountain range.

“I think I saw a cave,” Micah called back, straining to look around the corner of a large boulder that jutted forth from the ground and mountainside. “Give me a second. I’ll let you know whether or not to come down.”

Dec gave the affirmative then Micah crouched low to peer around the edge of the boulder.

That wasn’t just a boulder. That was the edge of the fucking mountain, looking down over a sheer two hundred foot drop to the canyon below. For a fleeting, horrible second, vertigo caught his senses and nearly dragged him to his knees, making the sky and the high trees waver and tilt.

But Micah put a steadying hand on the rock wall and took a deep breath, settling the sky firmly above him and the ground firmly below. He commanded Axel to stay put—not that he needed to. Axel was a damn smart dog and knew better than to go canyon jumping. Then Micah lay flat on his stomach, damn near hanging over the edge of the mountain, to look around the boulder’s protruding side.

There was definitely a cave on the other side, a yawning, darkened mouth, gaping right over the valley. The question was—was there anyone in it?

“Is there anyone in the cave?” A pause. The silence was weighty, colored by the sounds of raptors flying overhead and wind rippling through the trees that towered high above the ground, giving Micah a very odd sense of perspective as to exactly how far up in the sky he was.

But now was just about the worst time to calculate the distance it would take to kill a grown man, so he focused his attention on the solid ground and his mission and called out again. “This is Lewis and Clark County Search and Rescue Agent Micah Ellison, I repeat, is there anyone in the cave?”

A sound. It was barely even a real sound and if he hadn’t been trained by the very best to determine the difference between human and nature, he might not have heard it. But there it was, a whimper catching on the wind, the softest, shuddering inhalation of a very terrified child.

She’d been gone a week. In the world of search and rescue, a week was no better than a month was no better than a year. It was true what they said about forty-eight hours. Truer still when the Montana mountain ranges, of which there were many, were known for being unforgiving and merciless. Micah knew all about that first-hand.

But there was no denying the signs of life coming from the other side of the boulder. After nearly a decade of doing this job, Micah knew the sound of a frightened child all too well and unless the universe played some pretty hairy tricks, the girl on the other side of that sheer drop down to the valley was Chloe Robinson.

“Chloe,” he called out, hoping the sound would carry and not get lost on the wind, as any calls he made toward Dec and the team undoubtedly would. “Chloe Robinson.”

The sound of her fearful whimpering increased and when he called her name again, this time she answered him. Thank fuck for small victories.

But that was the way of kids, wasn’t it? Find them hidden in a darkened cave in the middle of a mountain range and they want to know how you know their name.

“Your mom and dad told me,” Micah replied. “See, they’ve been missing you and they sent me and my partner Dec out to see if we could find you with our dogs, Axel and Rosie. Do you like dogs, Chloe?”

A small sniff echoed across the gap, then, “I have a dog…at home. Her name is Daisy.”

Micah sighed in relief. Good, she was talking, which meant she wasn’t too dehydrated to function or too badly injured. He hoped.

“Well, Chloe, I’d really like to get you back home to Daisy, okay?” he said. “Now, I’m going to talk to my partner, but I’ll be right back…”

“No!” she shouted the word before he even finished his sentence. “Stay. Don’t leave. I don’t want to be alone anymore.”

Micah nodded and as carefully as he could, reached for the radio on his utility belt.

“Okay, I’m not leaving,” he said. “But I’m going to talk to him over the radio, okay? I just want to let him know that I found you, all right?”

She sniffled but agreed and Micah brought the radio to his mouth, doing his damnedest to think about Chloe, the brave as all hell six-year-old in the cave, and not the freaking mountainous drop right below his face.

“Dec,” he radioed over. “She’s here.” The radio crackled in and out, then cut out completely, plunging the mountain’s edge into silence that suddenly felt a whole hell of a lot colder and lonelier than it had a minute ago.

Or maybe that was just the clouds rolling in overhead. For fuck’s sake.

Okay, okay. He’d dealt with hairier situations than this and he was damn well going to get that girl out of the cave if it was his last act on earth and all that. He sent up a prayer to as many of his gods as he could remember in the moment then called back to the little girl.

“Just you and me now, Chloe, okay?” he said. “Now, I’m going to hook my belaying chord to a tree on this side of the gap then I’m coming over to you. You can talk to me. I can hear you.”

He stood and stepped a foot in from the edge of the cliff, allowing himself one deep breath before walking over to the thick oak tree growing sideways out of the mountain. He tested a branch with his weight, finding it thick and sturdy, before tossing the end of the rope around it and securing the knot that he had been tying since he was about Chloe’s age. He tugged on the end attached to his security belt and, satisfied, returned to the edge of the mountain.

“How did you end up here, Chloe?” Don’t look down, Micah.

“I got lost,” Chloe said, only a slight sniffle to her voice. Christ, this six-year-old little girl has bigger balls than I do. “I hid in the cave and fell asleep then there was a huge lightning storm. I woke up when all the rocks crashed.”

On closer inspection, Micah could tell that a big section of the mountain had broken free, creating the gap between him and the cave where Chloe was hidden. She’d walked into the cave and hadn’t been able to walk out, unless she was some sort of New Age Jesus.

“Well, you’re very brave, Chloe,” he said, testing the rope one more time. “I’m coming over now, okay?” And before she could answer him, he began the slow, one-foot-in-front-of-the-other walk across the large yawning mouth of the valley. He didn’t dare lift his feet, but rather scraped them along the mountain’s edge, making rock and dust crumble, and he gritted his teeth to keep from following their path with his eyes.