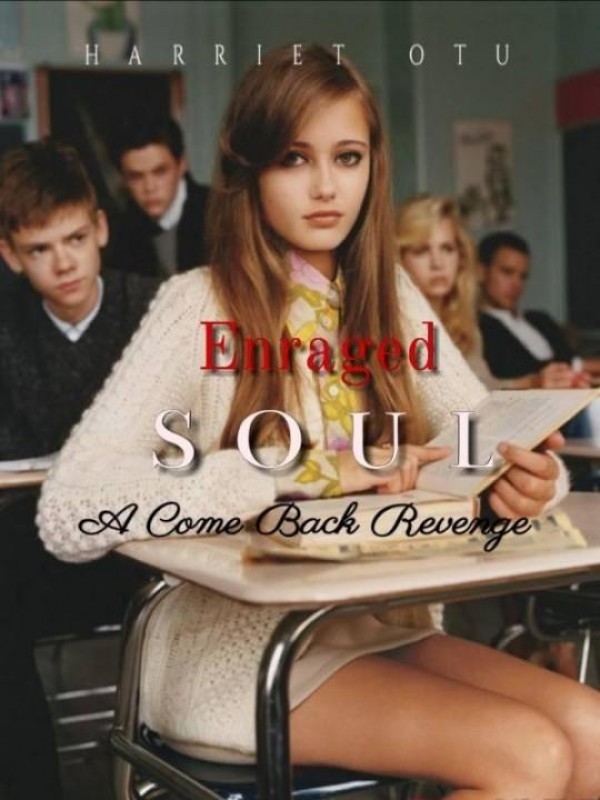 Laura was a bold, courageous, gorgeous, intelligent young lady who always stood out for herself. She always fought for her right and never allowed anyone to look down on her, her family or her friends. She was known as the most brilliant and talented student in her class. This irritated some of her mates and led to the plot of her attack to tame her. Hold her, let's see how her intelligence works this time...", Ben exclaimed, landing a huge slap on her cheek. Patrick and Fred held her tightly, chuckling and teasing. They molested and bullied her until she passed out. " Wait, Ben, I think we killed her....", Fred cried" Shut up, what do you know? She's just doing that to scare us...."" No, Ben...I think he's right...we killed her..."" Oh, my God...what should we do..."Join me on this journey while we find out what they did to her body and the outcome of their action. ENRAGED SOUL

But on the contrary, she was extremely late today, all thanks to her kid brother, Kelvin Roberts, the troublesome one among the three siblings of Mr. and Mrs Roberts.

Laura was the second daughter after Mya Roberts, the introvert, shy but intelligent and beauty queen of the Roberts' family.

" Stop it now, Kelvin Roberts, I need my bag. I'm already running late for my personal studies before class begins which you know how I hate missing that", Laura shouted, running after Kelvin who kept racing around the hall with her bag, teasing.

" Catch me if you can, sweet sis", he bursted out with laughter, dashing off to the kitchen.

Laura whined, tamping her foot on the floor, furious, " Oh, boy, I'll so kill you if I get hold of you. I bet you".

She sped off after him into the kitchen, shouting.

Kelvin, bumped into Mrs. Amy Roberts their mother who was coming out of the kitchen with a glass of milk in her hands.

" Hey, easy, why are you running around like that? You almost caused the milk to spill. Who is after..."

Without completing her statement, she noticed Laura approaching, all furious.

"Oh, I should have known. Causing trouble again? “she queried with a smile, holding Kelvin's chin.

Kelvin nodded with a smile," I just wanted to play, mum".

"Mum, please tell Kelvin to return my bag, I need to run now. Its already 7:00 and thanks to him I'm late ", Laura's voice echoed from behind, interrupting.

"Hey, young lady, where are your manners? No greetings? "

Laura sighed, forcing a smile, " Sorry mum,Good morning", she said, kissing her mum on the cheek.

Mrs. Amy smiled and brushed her hand through her daughter's hair.

"Good morning, honey. Hope you had a good night?"

She nodded, “ Yes mum. Now can you tell Kelvin to return my bag?"

Mrs Amy gave a faint chuckle, turning back to Kelvin who stood next to her, making teasing faces at Laura.

" Enough, young man. Return your sister's bag to her".

Kelvin gazed at them with a chuckle, hiding the bag behind him in hesitation.

" Yes, mum, I am", answered Kelvin and stepped towards Laura with his hand stretched out.

" Here you go, Laura", he said as he returned it to her. " Sorry for getting you late. Just wanted to have some fun with my sister. Hope I'm forgiven".

Laura knelt before him, smiling. " Sure, kid bro. You know I hold no grudges against you. We're good okay and I love you so much. Come here".

She hugged him, chuckling.

Mrs. Amy stared at her kids, full of smiles. "Laura?"

Mrs. Amy smiled, realizing Laura had already forgotten of her latenesses for school.

" I thought someone was running late for school or?"

Laura hit her head," Goodness, what just happened to me? I'm sure its all the cause of Kelvin's charm ", she exclaimed, teasing.

She hugged them and sped out of the house.

Mrs. Amy turned back to Kelvin who was already finding another trouble to start and smiled.

" No more troubles, Kelvin. Come and have your milk. You are running late for school. I got an important meeting to attend after dropping you off at school. "

He took the milk and sat down on the sofa in the hall. Mrs. Amy packed up his lunch box and bag pack, ready to set off.

Kelvin searched around for awhile in search of something unknown.

"Mum", he called after his search seemed futile.

"Huh, what is it this time, Kelvin?", answered Mrs Amy still busy with Kelvin's stuff.

"Where is Mya? I've not seen her this morning."

"Wanted to cause trouble for her as well?".

He gave a guilty smile and nodded.

Mrs. Amy chuckled and took the empty glass Kelvin placed on the table.

" She left early with dad today to the office. Poor you. Better luck next time my dear trouble maker",answered Mrs Amy as she trod off to the kitchen.

Kelvin made a pouted face as he playfully drew something with his legs on the floor. Mrs. Amy returned from the kitchen still smiling.

" Hey, no need to look all grumpy. You can have all the fun with her after school , okay?. Now we need to run. Come on, let's go", she said, tickling him.

He took his bag from the sofa and followed Mrs. Amy out of the house, cheerful.

Laura's car pulled over in front of the school premises but she was so immersed in her text book that she didn't realize. Mr. Van, her driver gazed at her through the driver's mirror and smiled, slightly shaking his head.

Without looking up from her book, she asked.

"Hmm, no, actually, we've arrived", he answered with a smile.

Laura swiftly raised her head from her book and took a glance through the window.

"Oh, you're right. Thanks ", she replied with a smile and packed her books into her bag.

Just when she was about to step out of the car, the bell rang.

Before he could even reply, Laura was far gone. He smiled, stared at her back while she diminished into the crowd of students.

" Such a book worm. So brave and brilliant ", he mumbled and drove off.

Laura got to the hallway in a rush with other students also rushing off to their classes. She shoved her bag well over her shoulder, not really giving attention to any of her mates who by passed her to their classrooms.

Her mind was busily plotting how to get back at Kelvin for her lateness. She kept whining as she approached her class.

"Damn it, Kelvin Roberts. You know how I hate to be this late for class. I'll so get back at you for this".

She went past class 2/4 and 3/4 before finally stopping at hers class 1/4. The whole block was so quite that even with a drop of pin, it's sound will be heard across the block. This definitely tells the presence

Laura wasn't so bothered about that. She pushed the door opened in a haste which drew the attention of everyone to her. She gave a faint sheepish smile and bowed, greeting their teacher whose attention was now fixed on her.

"You're late, Miss. Laura Roberts ", Mr. Mark exclaimed with quite an unfriendly expression.