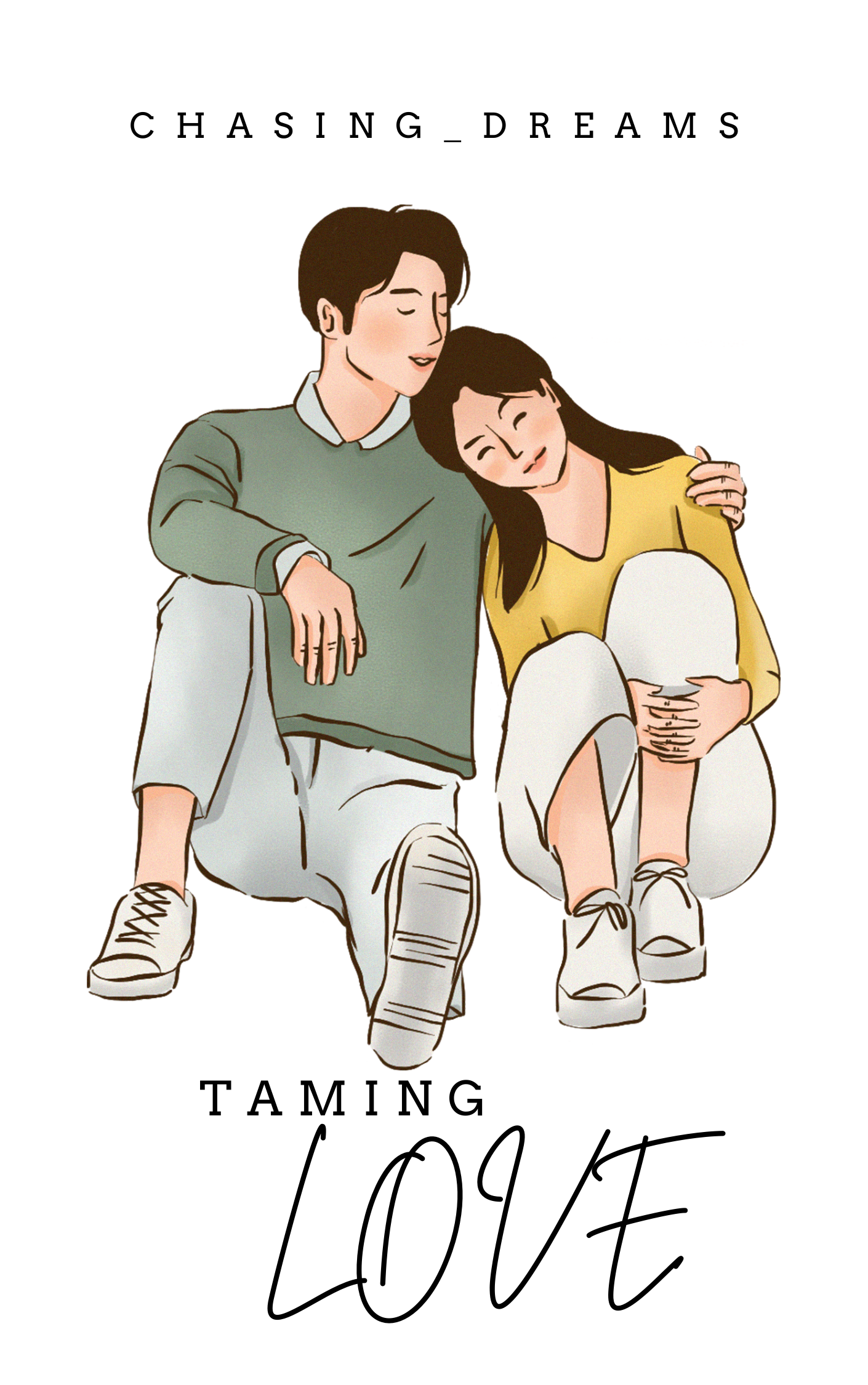 There's this thing that no one can see. But when you feel it, you know it's like a touch of heaven. That's happened when Ree met the handsome men especially, one man who felt her special. Will love will conquer all against the odds? Or, love will not be prevail, because wealth is more than anything.

“Thank you, Ree, for teaching and taking care of my kid,” a woman of her 30’s told me. She’s wearing a red off-shoulder and a pair of jeans and is slightly taller because of her high heels. Her golden earring catches my attention because of her white complexion.

I slightly crouched so that I was looking at the kid beside her. He’s wearing shorts and a plain white shirt, and his favorite red sneakers that I gave him. “Ander, you study hard, okay? Remember what I taught you. The strategies on how to review and memorize everything.” I ruffled his hair which earned me a smile. His dimples were now visible.

This kid! If only I had a kid, I would allow her to marry this boy. He’s handsome, and he’s a good kid. For sure, he’ll become a yummy guy that every girl would fall for in the future.

“Of course, I will. Where else do I get my intelligence? From you and my mom. But when are you coming back?” He’s smiling from ear to ear, waiting for my answer. This kid sure is positive. He really wants me to go back.

“I don’t know. My class is starting, too. But if my schedule is free–“ I stopped what I was saying and looked at his mom. “–I can call or text your mom.”

“Okay. I’ll look forward to that.” He hugs me before I stand.

“I’ll be going. Thank you for this.” I showed her the brown envelope that she had given me. “I promise, I’ll study harder.”

She nods at me before I leave.

I fixed my hair and laughed a little.

It took me half an hour to reach our house from where I worked. If there’s no traffic, I’d probably be home in fifteen minutes.

For two months, I go home weekly. But now, it took me two weeks before I got home. Ma’am Shane had somewhere to go because of business, and she didn’t want Ander to be alone while she was gone. That’s why I needed to stay longer. It wasn’t that bad because this kid and I get along so well.

When I got off the tricycle, there were lots of frantic people. It also smelled like plastic; I thought I was smelling my friends.

“Manong, what’s happening? Why does it smell like plastic here?” I asked the driver and bought a water bottle at the sidewalk vendor.

“Maybe your friend is being roasted.” I rolled my eyes at him. “I’m just kidding, Kid. There’s a house burning just right there.” He pointed in the direction where our house was located.

I felt the sudden urge to go and check it, and so I did. I sprinted towards our house, and I even tripped on my way. I didn’t mind the pain I felt on my knees as long as I got there and ensured that my parents were safe.

I make my way into the crowd, who’s just watching as the house burn down to crisp. There are some of them carrying all their stuff, crying. The firefighters were busy putting out the fire. And as I made my way closer, my heart wouldn’t stop pounding. My tears fell on my cheeks as the fire consumed our house.

“Mamsh!” I called. “Papsh!” I called out to them continuously, even though my throat started to hurt. I didn’t stop calling their names.

“Ree,” one of our neighbors called my name. She held my arm tightly when I attempted to run towards the fire.

“No!” I screamed frantically. “I need to save my mamsh and my papsh.” I wailed. She just hugged me like we were close. If I know, she’s just here to gossip about us. She’s not really here because she cares.

Thirty minutes passed when the firefighters stopped the fire. I couldn’t do anything but stare at our house, which is now just woods and ashes. Nothing was left.

“Hey, gossip girl,” I called our neighbor, who is still hugging me. I can’t remember her name, but I know that she’s one of the gossip girls in the neighborhood who is always with my mom. “Are my mamsh and papsh still at work?”

I wiped the tears on my cheeks. I thought I was just overreacting, and my parents are not really inside yet.

“Your papsh tried to save your mamsh inside, but it was too late. The fire was already too big.”

Nothing fell on my eyes after what I heard. I think I’m feeling numb now because of all the crying I did a while ago. Even my feelings are numb, too.

“What caused the fire?” I asked.

“Kids are playing with matches on your neighborhood. Everyone near them was asleep, so the fire spread before anyone could stop it.”

I wanted to curse those kids in my head, but I stopped myself. They’re just kids.

“Mamsh! Papsh!” I called again when I saw their corpse. Some men took their bodies on a stretcher before I hugged them.

I lost three of them. Even my little brother, who’s inside my mom’s womb, is now gone. He should be already four months next week if not for this.

Our neighbor tried to comfort me. “Neng, if you don’t have anywhere else to go, you can stay at our house.”

And now, it’s been a week since my family left me. And it’s been a week of torment for me. I didn’t notice that a week had passed since I became a drama queen. But there’s one thing that hasn’t been a week yet… my beauty. Well, my beauty has been here for eighteen years.

My deep thoughts were interrupted when a bird’s poop landed on my face. “What the–! Pwe! Bitter.” I fixed the blush on my face before staring at the sky.

The clear blue sky still gives me peace and joy, but it still hurts whenever I think of my parents and my unborn sibling. I caress the gravestone where my parent’s and sibling’s names are engraved.

As I wiped the tears that streamed down my face, I said, “Mamsh, Papsh, Brada, why didn’t you bring me with you all?” I cleared their grave with the dried leaves that fell on it.

I stopped crying for a while when someone sat beside me. My best friend handed me a burger and bottle of water, which I gladly accepted. My pretty stomach is already hungry.

“Ree, stop it. What are you saying?” I was startled by his presence, I mean her presence, actually whichever it is. “Overacting much? Your reaction is so late. I’ve been here for a while now.”

He is wearing a black t-shirt and pants paired with a chocolate-colored topsider. The color matches his chocolate brown eyes, too.

“Wait!” I said. “Why are you so late? It’s been a week since they were buried. Now, I’m annoyed.” I even smacked him on his shoulder and pouted a little.

“Sorry, Sista! You know that I’m a busy person. And can you please fill me in with the news?” He raised his eyebrow at me, and I could see his fake eyelashes. He looks more like a girl than me.

I heave a sigh before looking up at the sky again. As I tell him what happened, I can see the houses from here made of nipa palm, standing side by side.

“I feel embarrassed, Sista,” I said, “It’s been a week since our neighbor accepted me at their humble house, but I can’t find a house of my own yet. Telling Ma’am Chanelle about this is out of the question, too.”

“I am not used to you being a drama queen. Get your things and just live with me.”

“At your house? No! And aren’t you and your dad on a feud right now?” It’s my turn to raise an eyebrow at him.

“Sista, not there. I am not going back to my father’s house. We’ll live in my apartment. Actually, it’s not an apartment, but let’s just call it that.” He scratched the back of his head. “It’s hard to explain. My BB cream is melting because of all this stress.”

“Sista, good timing. We’re looking for a house helper.” He even clapped his hands with the idea he just thought.

“Of course, Sista. Stay-in. I’m going to help you sometimes, too.” He winked at me. If he’s not gay, I’ll think that he likes me. But nah. He won’t make me pregnant. Our genes will not make it.

“Sista, don’t stare at me,” he said, “I’ll just share with you my beauty if you’re envious of it.” He pouted a little, flexing his red lipstick to me. “What do you think of my lipstick? That’s matte. It’s expensive.”

I just rolled my eyes at him. “Back to the topic. What am I going to do there? Are there any kids to take care of?”

“None. But, Sista, here’s our address if you want.” He handed me a small piece of paper before standing up.

“Yeah. I have things to do, Sista. I’m sorry.” I’m sure he has a modelling gig or something.

“You take care, okay? And thank you.” I hugged him tightly. I really missed him even though he’s only here for a couple of minutes.

“Condolence, Sista. My house is open for you, okay?”

I nodded, and we kissed each other on our cheeks before he finally left. I was left there staring at the paper in my hands. Am I going to go? Why didn’t I ask about who he’s with at that house? Or if they are friendly or not.

I bit my lower lip and heaved a sigh. “Please, Mamsh, Papsh, Brada, give me a sign.” I felt the cold breeze that touched my skin as I closed my eyes. That’s probably the sign.